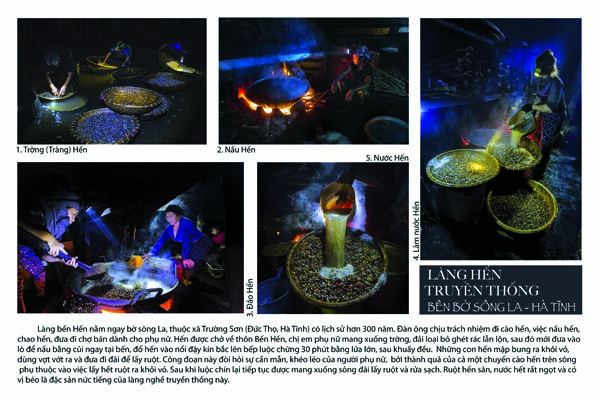 A village fed with mussels for over 300 years

For over 300 years, Ben Hen (Musle Landing) Village, Truong Son Commune, Duc Tho District of Ha Tinh Province quietly made a living by catching mussels in the idyllic river La. And for ages, this mollusk has been processed to make various delicacies typical of the Duc Tho district, and of Ha Tinh in general.
The high demand for mussels prompted the locals to come up with the unique profession of raking mussels that has fed hundreds of village households and even sponsored the education of the village kids.

The village where folks walk backward
We came to Ben Hen late in the afternoon. The river teemed with women cleaning mussles. On the bank, elder Le Duc Tai sat by his hot tea pot, his eyes keenly following every batch of mussels sieved from the river. Mr. Tai told us that this year he is 85, and he has spent over 50 years wading in the river La just for the mussels. The work was his way to earn a living all his life, and he was one of the champion mussel rakers of the village.
“It helped me raise my kids, give them an education and do many other things. Now that my feeble back doesn’t let me do it any more, I come out here to enjoy watching it and think of the good old days,” Mr. Tai said thoughtfully.
The village elders say nobody knows when people here first started doing this. All they know is their forefathers passed it down to them, and they to their descendants as a family “business.” A story went around that over 300 years ago, a widowed man brought up his son alone, and gave him an education. The child grew up, passed the royal exams and was about to start an office. On his homecoming voyage to his native land to receive homage, he was caught in a storm and fell into the river La.
Villagers searched the whole river but couldn’t find his body. They only found tiny mussels.These mussels, when cooked in soup or porridge, turned out to be very sweet. The villagers started to sell the mussels. They traded the excess with other villages for other necessities such as meat and vegetables. Gradually, they taught each other how to rake the mussels, and it became Ben Hen Village’s main source of income.
“The 20th of the 3rd lunar month every year, the village conducts a consecration ritual for its tutelary god. The villagers make all kinds of dishes from mussels to offer to the deities. This is the day Ben Hen villagers commemorate the founder of the trade,” Mr. Tai said.
Currently, about 150 households in Ben Hen have this difficult profession. Their faces are turned down to the mud and their backs are exposed to the sun during the day. It’s called “backward walking” because people used to walk backward pulling a rake with a 1-1.5m long handle connected to a rectangular bucket. They walked and shook rhythmically to sieve for the mussels. Nowadays, they use motor boats to pull the rakes. Just a few rounds can yield tens of kilograms of mussels.
Mussels can be caught all year round, but the summer months are the peak season, when tens of large ovens boil mussels all day, spreading thick curls of vapor and the typical rusty mussel smell.
Mr. Tai spoke softly, “Mussel raking is hard. Your back is exposed to the blazing sun in summer, and in winter, you are steeped in biting cold water before the cocks wake up. Grind your teeth, or stay hungry. Simple, huh?”

Seven digits a day
Breathing heavily, Mr. Tran Ngoc Quang wrestledwith a huge bag of mud, rubbish and mussels, the results of the last round of raking. He moved it back and forth in the water to remove the dirt and said, “Walking around a small section of river La used to be enough for me to earn a few quintals of mussels a day. But nowadays, resources are exhausted, and villagers have to rake for kilometers up Ngan Sau and Ngan Pho rivers or back down to Ben Thuy bridge in Vinh City to get some mussels to bring home.”
Pointing down to the river he continued, “Look, how can the mussels reproduce enough if every day tens of raking machines are plowing this tiny river section? It’s the beginning of the high season and one gets just a few quintals for a whole day raking. It’s getting harder and harder to get food to the table. Only we are kind of attached to the traditions and cannot quit. But in the peak season with luck one can make seven digits a day too.”
On the river bank, white vapor rises high above stoves boiling mussels. Her quick stirring hands show that Ms. Nguyen Thi Sen is a veteran in the trade. “Mussels are this village’s godsend. Four generations of my family have been raking them in this river. I grew up eating mussels, so no matter how hard it is, we need to preserve our traditional trade,” she said.
Day in day out, the work of the “mussel coolie” begins long before dawn until long after dark. Every time a boat approaches, all those who remain at the village, old and young, run to it to carry away baskets full of mussels to clean all the dirt and rubbish. The mussels are then steeped in water for less than half a day for them let out all the mud they have swallowed.
After that, the mussles are poured into a large pot, boiled and stirred regularly. The shells open and the meat detaches from them. All is scooped out with a sweep net and sifted to separate the meat from the shells. The work is hard and requires a great deal of patience so that no mussel meat is wasted.
According to Mr. Quang, mussels sell better during summer. The big ones are priced at 150,000VND/kg, the small ones about 40,000VND/kg. A day drifting along the river, each boat catches about 700kg of live mussels which yields 50-70kg meat. Costs substracted, his family earns almost a million each day. The shells can be used as poultry food or be burnt for lime to fertilize the fields, and the mussel boil water can be further cooked as food. There is a good use for everything.
Mr. Nguyen Van Tuyen, chairman of the People’s committee of Truong Son Commune shared with us. “The communal government has established collectives and lent money for boats and equipments so that people have peace of mind to maintain their forefathers’ traditional trade”.
“River La mussels today are not only present at the wholesale markets of Ha Tinh province, but also well known in neighboring provinces such as Nghe An, Quang Binh etc. So no matter what new industry will come to Truong Son, the mussel trade will be maintained,” Mr. Tuyen added confidently.

In recent years, the mussel rakes are pulled mostly by motor boats using specialized nets, so mussels of all sizes are caught,, including the newborn ones. Furthermore, the arbitrary sand resource exploitation also exhausts the mussel resources more and more