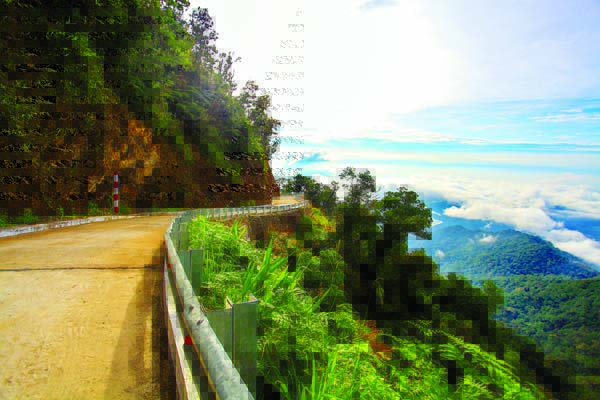 A piece of Paradise

Visitors can get to the park from Hue, Da Nang or Lang Co. Bach Ma Park is situated just 4km off National Highway No 1 in Phu Loc District. It is 40km south of Hue and 60km away from Da Nang.
Bicycles, motorcycles, vans or local buses are all convenient to reach the parkâ€™s entrance gate. Public buses operate from Da Nang to Hue every 15 minutes with a ticket price of VND60,000 per passenger. Visitors can also rent motorcycles from Da Nang, Hue or Lang Co.

Bach Ma is the only one of the five â€˜siblingâ€™ locations discovered and developed into a vacation land by the French, along with Sapa, Tam Dao, Ba Na and Da Lat, that has retained its almost pristine nature.
With its peak sitting at 1,450 metres above sea level, Bach Ma Mountain is the most ideal place in the country to enjoy mild weather. The mountain also boasts significant biodiversity.

Perfect biodiversity and nature conserve
Bach Ma National Park was formed in 1991. The park has a total area of nearly 37,500ha and is home to more than 4,500 flora and fauna species, including endemic and endangered species listed by International Union for Conservation of Nature (IUCN).
Some endangered primates, including black-shanked douc, loris, and gibbons, have appeared in high frequency in the areas with visitors to the park.
It is a living place for two of the world’s rarest mammals â€“ Asian biocorn and Vu Quang ox. Conservationists also found the pheasant species of lophura edwardsi, an endemic bird.
According to the park authorities, its rich biodiversity also shelter several deer species, including Truong Son, as well as evergreen flora.
The park rangers have worked hard for decades to reduce impacts from outsiders. The old practices of farming, illegal logging and hunting by locals are the common threats to the parkâ€™s nature.

Idyllic place for trekking
The park was discovered by the French engineer Girard in 1925. Later, the French developed a total of 139 villas to turn the mountain into a health resort centre, where visitors could enjoy the average temperature of between 15 and 20 degrees Celsius in summer and 5 degrees Celsius in winter.
Visitors have several options of ecofriendly tour programmes to enjoy nature in the park. According to the park authorities, the tours are designed in a positive manner to ensure the best protection of nature from the negative impact of 15,000 tourists visiting the park annually.
Accommodations in the park are supplied mainly by eight villas built by the French nearly 100 years ago. The park offers visitors six trekking tour programmes, departing from the accommodation centre, including trip to Tri Sao to Do Quyen Waterfall, to the mountain peak, where visitors stand in Hai Vong Dai to have a look to the sea, and to Ngu Ho, where five lakes lie together.
At the park, visitors also have chance to go deeper into the world of birds if they employ the service of guide Truong Cam, who is able to lure hundreds of birds into the trees around him by whistling.
According to the park authorities, hotel service in the villas can host 100 tourists at a time. Chefs are available to offer local food and wild vegetables at the villas as well as for night parties at camp fire site on the mountain peak.

Officials debate merits of upgrading Bach Ma
Local authorities in Thua Thien Hue recently proposed to take 387ha from the core zone of Bach Ma park to develop a tourism complex, which would include cable car systems. Experts fear that the proposed cable car systems would destroy its biodiversity as well as the natural beauty of the jungle and mountain.
According to local authorities, the systems would have two routes. One route links the reception hall at the parkâ€™s entrance gate and the mountain peak; another connects the peak with Ngu Ho, where five lakes sit at one site.
The cable car project advisor is POMA Group, a ropeway transportation firm headquartered in France. POMAâ€™s representatives told audiences at a seminar held to introduce the complex proposal that the system would not create pollution in terms of noise or emissions. However, experts estimated that the two cable car routes, one 4km long and another 1.6km long, would take up about 15ha of forest land, which is a great deal of the habitat space for flora and sauna in the park, creating obvious harm to the parkâ€™s biodiversity.
The 15ha land area claimed by the system accounted for the 26m width protection corridors along the lines, in which 5.6km line would take 145,600 square metres or 14.6ha. Several experts recommended discarding the cable car plan while others said the second route, which connects the mountain peak and Ngu Ho, should not be built.
â€œDefinitely, the cable car system should not be built,â€ said Dang Dinh Sy, an operator of a tour expedition for exploring nature in Bach Ma. Sy said that the road running from the mountain foot to its peak is good enough for transportation.
Sy said the tourism planners should obtain a wider view of tourism in the central region as well as the nationwide. He added that there are lots of choices for those visitors wanting to use cable car services in the area around Bach Ma, including at Tam Dao, Da Lat and Ba Na.
â€œTrendy visitors to Bach Ma are those who want hiking, trekking, bird viewing and flora and sauna exploring. Some others come to perform Zen meditation and yoga,â€ he said.
â€œVisitors choose to come there to trek, to enjoy the nature in a typical biosphere as well as to soak in the magic light of sunrise and sunset at the height of 1,400m above the sea level. But definitely not to stay in modern hotel facilities,â€ he said.

Measures to improve current service in Bach Ma
Travel agents that offer tours frequently into Bach Ma said the park does not need the new buildings that could harm the pristine nature of the place, but the improvement of service as well as full use of the 139 existing nearby villas.
Due to wetness in the mountain, hotel rooms in the park are said to be humid. Many visitors said the rooms need to be drier and cleaner. They also wanted more soap at the public restrooms around the park. People in love with the park suggested more warning signs to prevent Vietnamese visitors from dumping waste as well as making use of the wild to perform their superstitious rituals.
According to experts and those familiar to Bach Ma, local tourism authorities need to make full use of the existing villas in the park. Some said the tourism sector should work harder to lure qualified investors, expecting strong investment could help revive the villas as well as add more service to the existing infrastructure.
The majority of people know of Bach Ma supported the conserve this natural pearl while continuing to lure tourists.