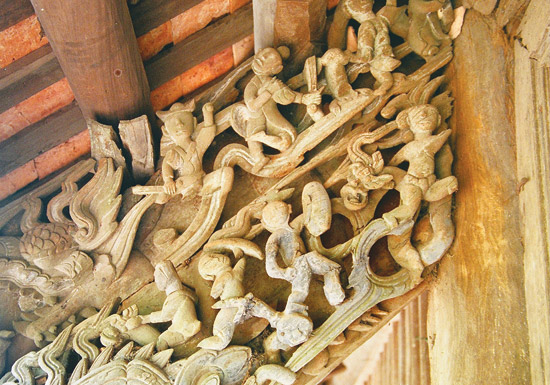 Vietnamese art reveals the soul of its people

Community Houses: If you want to understand the Vietnamese people, then just go look at the community house and that will be enough. The unique features of the Vietnamese character, culture, history, and art are all there in their entirety. No community house is like another. Because many teams of hired craftsmen worked on them together, there were no blueprints. They worked according to their customs and the practices of their trade. Some wood, bamboo, bricks and stones were purchased; others were donated. Craftsmen for hire and village labourers—men, women, the elderly, and the young—could all participate, whether they had a trade or not. The community house belonged to the village; the king’s dictates could not creep in from above, so the folk nature of community house art was pronounced.
As for the community house’s adorning sculpture, it involved the Four Mythical Creatures, the Four Worthies, and the Eight Treasures intermingled with scenes from common life activities such as bathing among lotuses, wrestling, hunting, tilling and raking—right in a place that reason would dictate should be solemn.
Not only are there dragons, k? lân (a chimerical hooved, horned beast), tortoises and phoenixes [Four Mythical Creatures], but additionally tigers, leopards, horses, and even geckos. All of them are important, yet not as important as actual life along with its many concerns, hopes, happiness, suffering, gains, losses, and the vicissitudes that take place every day. The community house’s themes are thus free; its style rudimentary, obtuse, ingenuous, and rustic.

Buddhist Statues:
The style of Vietnamese Buddhist sculpture mirrors precisely the natural characteristics of the Vietnamese people. It is modest simplicity, ingenuousness, and rusticity. It is looseness, openess, relaxation and letting go. It is ‘existence is empty, and emptiness is existential.’** It is scrupulous and yet not so, slack and yet tense. It is statues of veneration, yet it is as familiar as life. It is refined, yet not exuberant.
The statues are made in a way that is natural and unaffected by the professionalization, fastidiousness, and sophistication that would render them dry and impassive. They are made just as they shall ever be. Some statues are only meticulous in a few places, while the rest is open-ended. Whatever aspects happen upon a whim are grand, while those that do not are minor, disregarding the rules of anatomy and physiology. If money is available, they are gilded in gold over the entire body. If not, for them to be silver and inlaid in a gold coating is just fine.
The portrait of the statues is not sanctified or lofty, but rather intimate and familiar. That, too, is Buddhist philosophy. Regardless of whether the statues are of the newborn ??kyamuni Buddha, Avalokiteshvara seated upon a mountain, Mañju?r?, or Samantabhadra, they are all like this. Buddhism does not advocate idolatry. Seeing one’s nature to realize Buddhahood and following one’s karmic affinities, each and every person can become a Buddha irrespective of whether one is a peasant or an intellectual.
There’s a sense that the artists of old imitated the countenances of neighbours or kinfolk, copying their family in sculpture, carvings, and paintings. The statues are utterly distinct from the Laotian and Thai statues, which appear too saintly, the overly towering and imposing statues of Japan, and Chinese statues, which are so meticulous as to become arid and lacking a spirit of life.

Ceramic:
It is precisely its incomplete, helter-skelter, uncontrived, and somewhat coarse and awkward characteristics that render in Vietnamese ceramic its beauty. From the time of the Ly, Tran, and Le Dynasties, it has been thus. A little warped, a little asymmetrical, a bit heavy, thick, and crooked without any one resembling another; that is the beauty of singularity. Each batch is distinct. The glaze is approximate, the mold is not absolutely precise, and the coal and firewood are administered in rough doses, such that every time they emerge from the kiln, they form a different colour. They are all jade green celadon glaze, but at times they are the jade green of cucumber skins, at others the jade green of boiled water morning-glory or the green of pumpkin buds.
I wonder if it could be due to their nature that is so adverse to order, versification and modality, along with their realistic purview that sees through guileless, artless eyes that make the statues in the Buddhist pagodas of the Vietnamese so beautiful and individual. Whatever is overly meticulous, precise, straightened out, shiny, smooth and tidy, is not the natural characteristic of the Vietnamese people and is not Vietnamese art. Vietnamese people are more sensual than rational and more intuitive than ratiocinative.
Thus, the beauty, fascination, and originality of Vietnamese art are forged precisely from its lack of fastidiousness, sophistication, and artfulness. Whatever one’s character is, that is how one’s creation shall be. For one to create for one’s own use, it should suit oneself foremost—forthrightly, and with gentle honesty.
**A revered line of the Buddhist Prajñ?p?ramit? Heart Sutra
* Le Thiet Cuong is a well-known artist from Hanoi