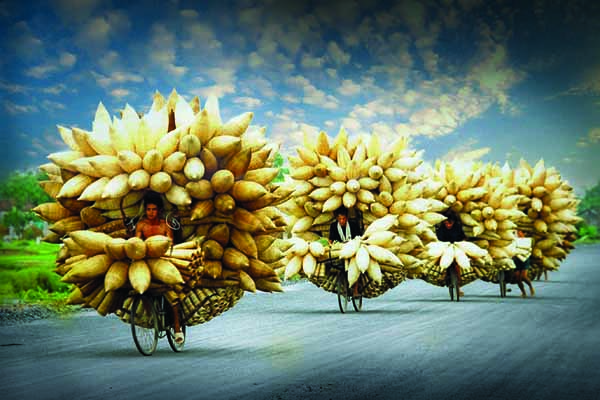 About 60km from Hanoi, Thu Sy Village in Tien Lu District, Hung Yen Province is famous for the traditional ?o? weaving trade. ?o? is a fishing trap, usually used in Northern provinces in Vietnam.
It’s a typical northern village with three worn out compartment houses under weathered dark brown tiled roofs behind dense green bamboo clumps, all forming a tranquil idylic picture.
In Thu Sy, about 500 people are involved in ?o? weaving, mostly concentrated in the hamlets of Noi Lang and Tat Vien. Villagers here have been doing this for a long time, 200 years, according to the elders.
In every village household, one can see the scene of elderly men and women sitting on the front porch exchanging mundane village news with liveliness while their skillful hands turn bunches of bamboo splints into beautiful fish traps.
Aged slender bamboo stems with long sections are cut and split into thin splints of equal size which are then whittled smooth and sun-dried.
A beautiful product must look proportionately tapered, with splints firmly fixed at an equal distance. It should also be smoked for more durability.
Each year, Thu Sy produces about 650,000 ?o? to be sold to Ha Nam, Nam Dinh, Bac Ninh and Bac Giang provinces which have plenty of low paddy fields and small irrgation canals. There are three of four  kinds of ?o?s. The smoked, cockroach brown ones cost VND30-40,000 a piece, while the white, unsmoked ones cost only VND20,000.
Today ?o? has found a new use as an interior decoration item, quite popular not only domestically, but also in other countries such as US, Singapore, Japan and India.