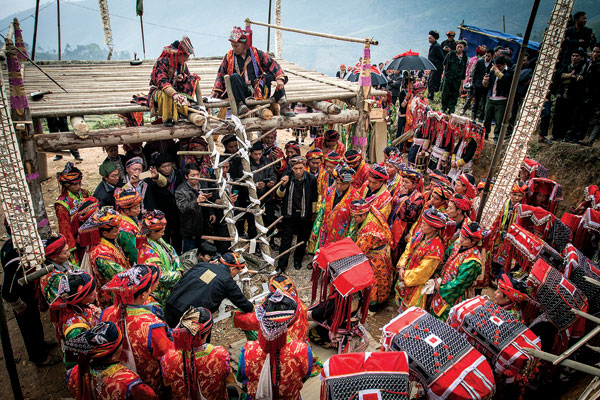 The maturityritual of the Red Dao people

A ritual for asking the gods’ and ancestors’ permission to begin the maturity ceremony. Photo: Ngoc Bang

A Red Dao couple in a maturity ritual

Blowing on horns and blowing water

One of the rituals in the maturity ceremony.
Photos: Ngoc Bang

The maturity ritual is one of the oldest and most unique customs of the Red Dao minority living in the mountains of North Vietnam, and is recognized by the government as a national intangible heritage. It has no fixed date, but is usually conducted between the 11th lunar month and the 1st month of the next lunar year, when farm work is least intensive.

The King of Heaven confers the power to fight evil spirits
In the deep past, from time to time, evil spirits came to harm people, cattle and crops, disturbing the peaceful life of the Red Dao. So, the King of Heaven conferred special powers and titles on Red Dao men who would fight them alongside troops sent from heaven. Since then, every year, the King of Heaven does it again for men who want to help their people. That’s how the thousand-year-old legends go.
The maturity ritual is a must in the lives of Red Dao men when they reach the age of 13. Any man, who has not had passed this is considered immature. Nowadays, because it is too costly compared to average income, each ritual is organized for 30 – 40 men.
To prepare for maturity, a man must go through a rigorous self-improvement process, learn procedural aspects of rituals and know by heart prayers and magic words written in ancient sacred books of the Red Dao people. The date of the ritual is carefully selected by a shaman. For many days before that, both the shaman and the maturity candidates must keep themselves pure by observing strict abstinence from sex, from urinating and defecating toward where the sun rises and other strict practices.
The maturity ritual is also called ‘lighting’, or ‘the enlightenment ritual’. A man recognized by the community as mature must have passed the lighting ritual, or be enlightened. There are 4 levels of lighting; with 3, 7, 9 or 12 candles.

A 12-candle enlightenment ritual
‘It takes a lot of work to prepare a 12-candle maturity ritual. About 4 years before the ritual, dozens of parents of candidates chose a wide clearing to plant many fruit trees. A year before the great event, they begin raising a batch of pigs, chickens and vegetables specially to feed the villagers and guests. Near the date, they set up a large tent capable of hosting over 300 people. They decorate the tent with colorful bands and pictures of deities and arrange many altars in the tent and outside,’ according to Mr. Trung Hau from Pin Nga Commune, Bat Xat District, Lao Cai Province, where people conduct many maturity rituals which have drawn a lot of attention from the press.
On the date of enlightenment set by the most respected lead shaman, a dozen shamans together with the families of the maturity candidates and villagers gather to prepare all sorts of food offerings such as steamed sticky rice, puddings, cakes etc. As vegetarian food is arranged on the altars inside the tent and the biggest stage outside, the shamans change to their traditional ceremonial outfit.
At the set time, the lead shaman in dragon-and-pattern-embroidered dress ascends to the stage outside. He burns incense, reads prayers and makes respectful movements to ask the gods’ and ancestors’ permission to begin the maturity ceremony. Over 40 men about to become mature and hundreds of villagers stand around solemnly. The opening ceremony lasts for about an hour.
‘After the opening, the shamans take an hour rest, and then move inside the big tent to continue prayers and consecration. The process repeats over and over, day and night, and finishes only after 10 days of continuous rituals. Nobody knows how many times they repeat this process. I have attended these rituals since my childhood but could never count how many times they repeat it in each such ceremony. All I know is that each repetition has a different meaning and purpose,’ Mr. Hau recounted.
Among the many prayers and consecrations, the conferment is the most important. The shamans light the candles to enlighten and cleanse the candidates. Then they beat drums and gongs, walk 9-11 rounds circling each candidate while reading magic words from the ancient Red Dao sacred books and using sticks, seals, dice, rice bundles and candles to transfer power to them together with 180 soldiers from the underworld. At the end of the process, the shamans thank the gods and ancestors.
The Red Dao believe that a man upon whom the 12-candle enlightenment has been conferred has the right to go to heaven and the underworld at any time, to mobilize his 180 soldiers from the underworld, and to attend and help shamans in different rituals. After death, they can rejoin the ancestors. In the village’s daily life the men who have passed the enlightenment rituals are considered mature, both mentally and physically. They know right from wrong, and can take part in all the major matters of the community.
The ceremony ends with a big feast and a lot of fun. The candidates’ families butcher pigs and chickens. Crowds of guests gather to share their happiness. Hosts and guests eat, play drums, gongs, cymbals and sing together. The more elated ones dance, stylizing the movements of daily activities of working the fields, sowing crops, and building a house.