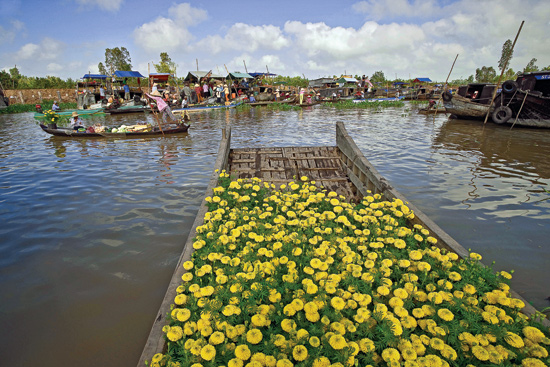 The marigold resists the upstart gladiolus

Marigolds on the way to a
floating market in Soc Trang Province, in the Mekong Delta
Photo: Hoang The Nhiem, early 2010

Vietnam Heritage, February 2011 — Marigolds let me know that T?t, which falls on 3 February this year, is all around. I remember when I was a little boy my grandfather used to buy marigolds, red chrysanthemums, kalanchoes and Dracaena sanderiana, or lucky bamboo, and arrange them in vases on the ancestral altar during T?t, except that on New Year’s Eve the altar was decorated with marigolds alone.
My grandfather said our ancestors believed marigolds represented good health, longevity and peace of mind. The yellow was the colour of the Buddha’s robe, which was said to have been hung on a bamboo tree  so that its  shade determined the land of Buddha, where ghosts could not approach and people could live.
When midnight of New Year’s Eve neared, I would look for the biggest, roundest and most beautiful marigold in the house, wait for a chicken to be boiled, as a traditional offering to the ancestors, and put the flower in its mouth as it was laid on the ancestral altar.
This family tradition all but disappeared with my grandfather. My father said it was because the standard of living had improved, so fewer people wanted to have flowers like marigolds, kalanchoe’s or Dracaena sanderiana in their house during T?t. These flowers reminded them of poverty and had become old-fashioned. They had been replaced with more luxurious flowers like gladioli, orchids and lilies, sometimes placed alongside expensive liquor. The chicken of New Year’s Eve is no longer given a marigold.
The marigold has not been ousted from its traditional place in the two pots at the front door at T?t, and on the first day of the full moon of the lunar new year marigolds are preferred to other kinds of flowers to offer Buddha and ancestors. Since my family now follows Buddhism, we no longer observe the tradition of offering a chicken, in order to avoid killing, but, after many years, the marigold has returned to the ancestral altar on New Year’s Eve. I wonder, if these yellow flowers were missing, whether I would be spiritually ready for another year.
I have travelled throughout the country and noted that marigolds are connected to the Vietnamese people in many circumstances. They are used to pay respect to the ancestors when a child is born and at its ceremony of one month of age and first birthday. When someone dies, marigolds are offered at their funeral or grave.
Marigolds are very affordable. There are fields of marigolds in the countryside during the last month of the lunar year. Truckloads of marigolds rush. Marigolds go next to the apricot, the traditional flower for Tet in southern Vietnam.
This article appeared in V?n Hóa Ph?t Giáo, a Buddhist Magazine, in late 2007