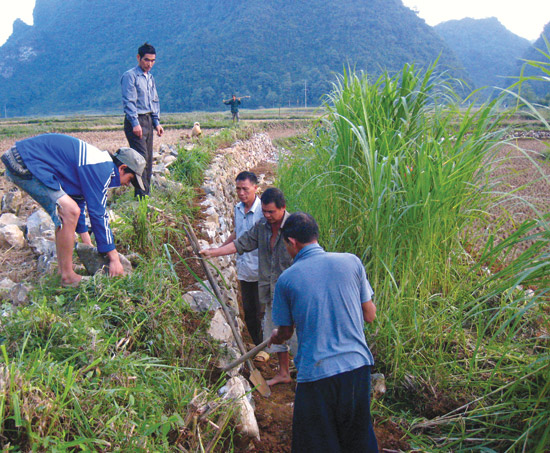 The long road to prosperity

From Cao Bang city centre, following the smooth asphaltic zigzags of the National Highway no. 3, Ms Truong Ha, a local reporter, and I came to Pac Rang, a unique village in Phuc Sen Commune, Quang Uyen District. We turned right to a concrete road among yellow corn, green vegetables and gray rocks, and the traffic noise quickly was reduced, replaced by the clanging of hammers, puffing of bellows and sizzling of hot iron in water. Iron forging is a traditional trade of the Nung An ethnicity here.
Walking around the village under the shade of indigo-dyed cloths, we were most amazed to see that Pac Rang was so neat compared to most ethnic villages in the northern mountains, with concrete or brick paved streets, just like city sidewalks, a clean water supply system that serves every household, a garbage collection system, a big drainage system, and no humans living right above the animals.
Seeing a pretty, stilted house that leans on a rock wall and looks out to the plain fields, we entered its gates. A middle-aged man stopped hammering his unfinished knife to warmly invite us into the house. He was Long Van Hai, Pac Rang village chief. He made tea for us and called his wife Trieu Thi Dan to come out to receive the guests. His house, with stone walls outside, wooden floor, ying-yang tile roof, and mixed mud-hay partitioning walls inside, was built in 1996. Now it had acquired the beautiful sheen of time. It was one of the five stilted houses invested in by the Executive Committee of the Sustainable Tourism Development of the Extended Sub-Mekong Region of Cao Bang Province for community tourism. I was quite fascinated to see a house in such a remote place that had a clean and neat bathroom, with a mirror, a comb, towels, shampoos and shower creams.
We were the first guests on whom our host had a chance to practice their hospitality skills. The husband lovingly showed us the secrets of iron forging, from selecting the steel of a car shock absorber, to hammering and tempering successively and continuously for ninety minutes to make a black, beautiful and sharp knife that would last at least fifteen years. A Nung An man that can not forge iron is considered useless. His wife related every detail of cotton planting, harvesting, threading, weaving, dyeing, sewing and embroidering to make a set of brocades that will last more than ten years and costs three million dong for men and six million for women.

Then he took us to the fields in front of the house to show us the stone jetty. Nung people build terraces to plant rice, so they take care not to let the land slide. â€˜An upper terrace owner has to build a jetty to hold his land, the lower terrace owner in turn does the same for his land. That way, everybody protects his land and water to grow rice, corn and beans,â€™ explained Long Van Chien, while reinforcing his jetty. Highland people collect stones, big and small, assemble them like a jigsaw puzzle to make them fit each other, then mortar the wall with dirt or cement. These walls stand strong against buffalo butts and the weather for centuries, not only to protect the terraces, but also as a unique cultural feature.
When we came back, dinner was ready on a straw mat spread in front of the house. Ms Dan had prepared for us all the smells and tastes of local specialties: steamed grilled pork, stir-fried beef with forest vegetables, pork BBQ and fried fish from a nearby creek. Having exotic food and drinks and a conversation with hospitable and simple-hearted Nung An folks amidst the mountains was something to remember. At nightfall, we mingled with a group of artists and the villagers in their traditional songs and dances.
The development project, sponsored by Asian Development Bank, aims at helping the local communities that have potential to develop ecotourism and community tourism in order to eliminate poverty step by step. Pac Rang village had 51 households, with over 400 Nung An ethnic persons. They lived in an area of 167,000 square metres for many generations. Surrounded by high mountains, stilted houses grouped together among paddy fields, creeks and a water mine, it creates an idyllic, peaceful scenery. The people here have the trades of iron forging, stonework and weaving, and many unique songs and dances. In early 2009, Pac Rang was officially chosen to be the first community tourist attraction of Cao Bang Province.
The first obstacle the committee had to overcome was the problem with livestock. Ms Nhan Thi Minh Thi, deputy head of the Department of Culture and deputy director of the development project, still shudder at their first impression of five years before. The Nung An used to use the space under the floor to keep working tools, firewood and livestock. The floor is where all the living activities take place. Humans and animals were separated only by a layer of wooden or bamboo boards. The animals ate, defecated and pissed on the ground, then walked and lied down on it all. Year after year, layers of filth accumulated. Ms Thi recalls, â€˜The stench was permanent in the village. Flies and mosquitoes swarmed around. Everybody had to cover their nose. When we proposed to move the livestock away for better hygiene, the reaction was overwhelming. â€˜This is our way for generations.â€™ â€˜You canâ€™t separate us from our livestock, what if bad guys steal them to sell in China?â€™ We had to slowly answer their questions, explaining bit by bit. The projectâ€™s executive committee built each family a house with two rooms to keep the animals, but the next time we came, they were still beneath the floor. We asked why the animals were not moved, they said because they were too tired or too busy. So we took off our shoes, rolled up our sleeves, put on hygiene masks and waded in to the ankle-deep faeces to clean it up. It took us nearly a year! Now all the households have a separate livestock houses and a clean ground under the floor. What a feat!â€™
Having cleaned up under the floors, the project built for each family peripheral facilities, including a shower room, an autolytic toilet, a bio-gas chamber for animal excrement, and gave them a gas stove that was cleaner and that freed them from having to collect firewood in the forest. Then we invited the Vietnam Project Management Consulting Company to plan a community tourist destination at blacksmith village Pac Rang for 2005. The plan included a two-storey village cultural centre with over 120 square metres for communal activities and artefact exhibition, with computers connected to the internet. Then, we built parking spaces, sport courts for the villagers, concrete and brick roads, connected clean water supply pipes to every house and a smoke outlet for every furnace. The projectâ€™s most important activity was skill improvement for the community. The project executive committee opened hospitality skill classes for the folks and a crash English class for 20 persons.
Ms Thi said, â€˜The project was conducted from 2009 to 2013, with a nearly 12 billion dong ($571,428) investment. Right now, five among 56 households are ready to receive tourist guests. We donated to each family four sets of blankets, pillows, mattresses and bed sheets to encourage them to offer services to guests. We helped them to build the price list: VND40,000 ($1.90)/meal/person and VND60,000 ($2.86)/bed/night. We helped them print info sheets and bulletins to distribute at domestic and international tourist fairs to promote this new destination. We will also help them to create a fund, to extract a part of the revenue to reinvest in community development.â€™

Text by Do Quang Tuan Hoang and photos by Truong Ha