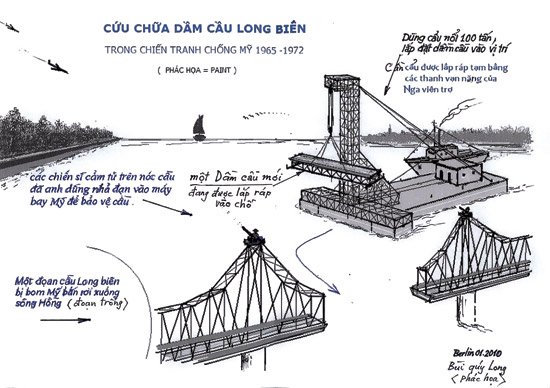 In the drawings, Bui Quy Long depicts how Long Bien Bridge in Hanoi was damaged by American bombings in December 1972. In the drawing 1, a new structure, built with steel supplied by the former Soviet Union, was being transported to fix the damage, Mr Long says.
From 1968 to 1972, Mr Long, then working as a technician for Bridge Building Company No 7 in Hanoi, was involved in repairing Long Bien Bridge many times.
On top of the bridge in the drawing 1 is a 12.7 mm anti-aircraft machinegun, mounted in 1967, according to Tran Cong Huyen, from Hanoi, who was then a soldier in an air-defence company stationed next to the bridge.
Mr Long tells Vietnam Heritage he drew the pictures so his children and grandchildren could learn about the past.
Mr Long says that a floating bridge [drawing 2] was also installed near Long Bien Bridge during the time of bombing so trains could still cross the river. The floating bridge was not detected by the Americans, he says.
Mr Long says three 300-tonne barges were used to carry sections of the­­­ floating bridge away by day making it look like a broken bridge and put the sections back by night.