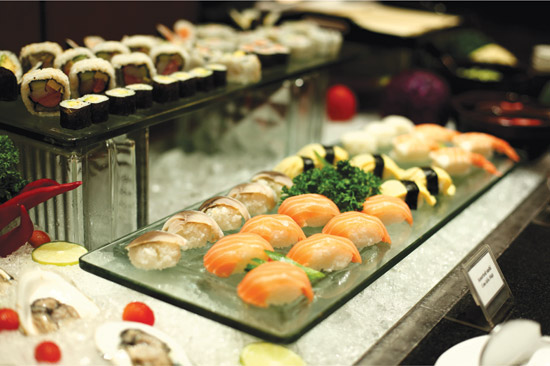 Surf and turf and a lot more besides

The â€˜Duxtonâ€™ is not to be missed. It is the beige-and-white hotel toward the harbour end of Saigonâ€™s chic and famous Nguyen Hue boulevard. Behind the huge black screen with Chinese characters at the end of the bright and airy lobby, there lies quite a culinary experience. If you hanker for a banquet that features luxury food from both land and ocean and at an affordable price, then here is where you will find it. The stars of this dinner banquet are undoubtedly the succulent beef raised on the prairies of the United States and the lobster sourced mainly from Maine. The restaurant which also offers an â€˜a la carteâ€™ menu is simply called â€˜The Grillâ€™.
For the diner, the buffet is not as easy as it looks. All the decisions are yours. In the past, I have always followed the golden rule taken from the rubric of examinations-â€˜Attempt allâ€™. This is particularly appropriate in Vietnam, where in Vietnamese, the word â€˜monâ€™ but with slightly different diacriticals, means both dish and school subject. But now, in middle age, the questions of what combines with what and what is best for the health becomes more difficult. I started with a traditional bread roll and butter, together with Japanese sushi and sashimi. I chose morsels of herring, salmon and egg, which was not a bad kick off. It was not only tasty, but it sparked off the taste buds.

If you hanker for a banquet that features luxury food from both land and ocean and at an affordable price, then here is where you will find it

Ours was a party of four. Sales and Marketing Manager Mr Dang Di Hieu was at the table with his assistant Miss Bach Hoa Tranh. I had brought along my teenage daughter. Mr Hieu explained a little bit about the hotel, which is part of a Singaporean chain. He told us the buffet was available throughout the day, so it is suitable for late breakfasters. Also, with a hundred and twenty dining places, it can accommodate large groups. One interesting fact we learned is that the hotel featured in the American Viet Kieu film â€˜Cycloâ€™.
The dining hall is large, but the buffet is arranged centrally, so we had to make only short trips to refill our plates. There is an attractive display of sea food on a bed of ice at the entrance, from which I took a pair of raw oysters; you can also have this delicacy baked in cheese. A line of chafing dishes contain chicken, pork, fried rice, and vegetable dishes. I stocked up on broccoli, cauliflower and my favourite veggie, courgettes (zucchinis). My daughter remarking on how tasty they were had me add some chips to all this. On to the salad section I chose the baby octopus salad. In an area of its own, I took some melt-in-the-mouth slices of roast beef and served myself from a whole steamed fish.
The grill station is in a separate but close-to-hand area. There are pork cuts, chicken breasts and sausages pork cuts. You can have your lobster cooked in a number of ways: baked with garlic butter, in Singapore chilli and egg sauce, stir- fried with tamarind sauce or cooked in Cajun spices. We had it in the first- mentioned manner. Oh what fun we had cracking open the legs with the nutcrackers provided! After the finger dips had arrived, I asked my daughter what she thought of lobster, as this was her first time to enjoy it. â€˜Quite nice, but I prefer crabâ€™, came the answer. I did not get to taste such things until well into adulthood. The nearest I got was prawn cocktail.
There were plenty of cakes, pastries, and fresh fruits to choose from for dessert. I personally went for soft creamy French cheese with crackers, but I got vicarious pleasure from watching my teenager stuff herself with mint and chocolate ice cream encrusted with peanuts. Here a confession. My daughter could not find room for the apple pie she had picked put so I polished it off for her. I still have the taste of cloves and cinnamon on my lips.
I know there are many great places in Saigon to enjoy a family or business meal for much less money, but if you are the mood for a splurge and want to eat food that you do not normally indulge in, the Duxton Hotel Saigon buffet is a great choice. I hope this has whetted your appetite and perhaps you too will be able to enjoy wondrous fruit of the ocean and the finest meat from the grassland cooked and presented with care and style.