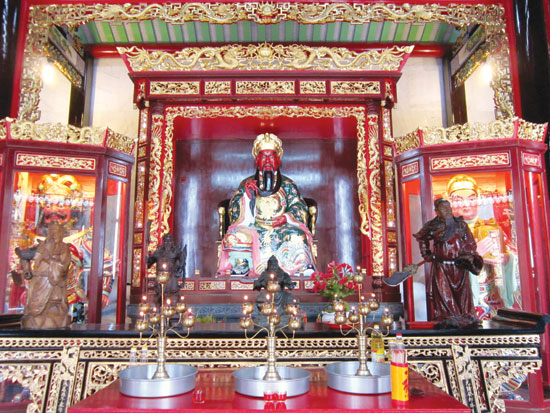 Guan Yu, in the middle

Guan Yu (Gong) is a deity in Chinese mythology, a remarkable figure in popular Confucianism, Taoism, and Chinese Buddhism. Confucianism considers him the ‘Martial God’ (whereas the ‘Intellectual God’ is Confucius himself). In Buddhism, he is a dharmap?la named Gia Lam Bodhisattva, and in Taoism, he is the ‘Great Triple Wrath King’. These three religions, together with folklore and historical records, have created a figure of Guan Gong which is ‘Righteous’, ‘Refined’, ‘Sacred’ and ‘Solemn’. Under the Ming-Qing dynasties, Guan Gong became one of the most important gods in Chinese culture and his temples were built everywhere.
And so, Chinese immigrants brought him to Vietnam to be one of the three main Gods (together with Ancestral Ghost and God of Moral and Happiness) in their spiritual life.
In business, disputing parties often challenge each other to take oath at Guan Gong’s altar. ‘As His Godliness witnessed’, to a Chinese, is an oath more sacred and more reliable than any written contract.
In Ho Chi Minh City today, the biggest temple dedicated to Guan Gong is Nghia An Temple, or simply, ‘His Godliness Temple’ of the Cháozh?u Chinese. Here, Guan Gong’s altar is the central one, with his servants Quan Binh and Chau Xuong on his sides. By Chinese tradition, Guan Gong is usually celebrated on 13/1, 13/5 and 24/6 each lunar year. But at Nghia An temple, the most important and lavish celebration is on the 15th of the first lunar month. This is a big festival for the Chinese community. They come here to burn incense for the memory of their ancestors and to beg for health and prosperity.
People from everywhere come to Nghia An Temple with various tribute items, among which, a set of paper dresses is a must. These items can be bought at the gate and in the courtyard of the temple. As a tribute item, chickens are forbidden because cocks were a benefactor of Guan Gong’s.
On this occasion, many traders also come to the temple to borrow money. The money is extracted from the temple treasury and put in a red envelope (the sum is purely symbolic; just VND500 or VND1,000). Each packet, called ‘heaven’s gift,’ contains two envelopes, two tangerines and one joss-paper note. The borrower must burn incense, pray and then come to ask for heaven’s gift from the temple’s managers. The lending term is one year or shorter. At the due date, the borrower has to come to the temple to pay back the ‘loan’ with interest by putting twice the borrowed amount into the contribution box and give sacrificial items to the god.

Among the wealth-begging activities during the Guan Gong celebration, the most anticipated is the lantern auction (which usually takes place the evening of the 18th of the first lunar month. These lanterns may be ordered from the Chinatown or from China itself, and in 2014, the initial bid was VND10 million each.
According to Mr Vuong Quoc Quang, office head at the temple, at exactly 8 p.m., the temple managerial board begins auctioning nine lanterns representing the nine Gods worshiped at the temple.
The MC calls the name of the god represented by the lantern being auctioned, and of course, the highest bidder wins the lantern.
In my observation during 2013 and 2014, each lantern was won by hundreds of millions of dong. The ninth lantern, which represented Guan Gong, was the most sought-after item. In 2013, it was auctioned for 668 million, and 2014, 768 million.
As a matter of course, the bid amount always contains the digit ‘6’ or ‘8’ or both. In Chinese, ‘6’ rhymes with ‘wealth’ and ‘8’ rhymes with ‘flourish’, so ‘68’ would be understood as ‘Wealth Flourishing’.
According to the temple’s records, in 2013 and 2014, the total amount received from the auctions each time were around VND4 billion.
Besides the auction of lanterns, during the celebration days, the temple organizes lion dances in daytime and Ti?u songs in the evenings. In 2014, they even invited two troops from Guangdong to perform shows every night, attracting people from all walks of life.