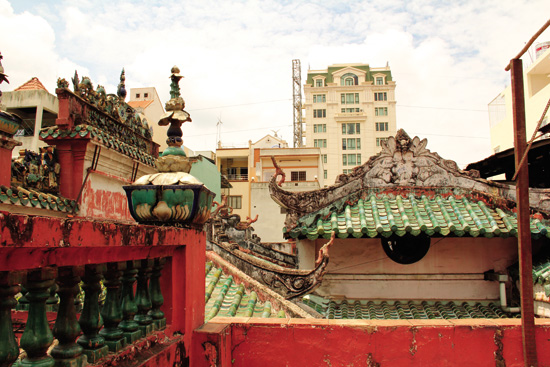 View from a patio on the first floor of the pagoda.

Vietnam Heritage, June-July 2011 — Just a short way down Mai Thá»‹ Lá»±u Street and we have now crossed into Äa Kao Ward (no passport required). At number 73 Mai Thá»‹ Lá»±u Street one finds perhaps Saigonâ€™s most colourful and active pagoda â€“ the Jade Emperor Pagoda. The Vietnamese have two names for this pagoda, ChÃ¹a PhÆ°á»›c HÃ£i, which means something like â€˜Pagoda of Oceanic Happinessâ€™, and Äiá»‡n Ngá»c HoÃ ng, meaning Palace of the Jade Emperor. Pagodas in Vietnam all owe a lot to Chinese culture. This one, however, is a-hundred-per-cent Chinese in origin, founded by immigrants over a century ago, according to my 2000 copy of The Rough Guide. No bright yellow and red here. The outside walls are of a more subtle red pigment. It is the same red as is used in Pekingâ€™s forbidden city and, as was explained to me there, the colour is obtained from pigâ€™s blood.
Behind these walls and a standard, tiled-roof gateway you first pass an area that was given over to motorbike parking. Beyond this is a wide, deep courtyard whose main feature is the sanctuary it affords to living things, especially people sitting, soaking up the shade. A high aluminium structure with wooden rafters has been erected over a circular pool, perhaps for shelter from the rain. Here aloft perch pigeons. They feed on seed on the ground. This brought back childhood memories of feeding these birds with breadcrumbs at Canterbury Cathedral in England. In the fountain, carp, catfish and a few turtles swirl. Two encaged tortoises, as symbols of longevity, were displayed on a platform to the right. In addition, adjacent to the main hall, there was a deep and large pool teeming with hundreds of turtles and some lobsters. I watched them eagerly gobble up vegetation that people offered them. On the wall of the pagoda there was explanation in Vietnamese of these creatures.

Inside an outer sanctum of the Jade Emperor Pagoda

This pagoda was much more crowded than the temple to Tráº§n HÆ°ng Äáº¡o [described below]. There were many more locals and, whilst I had had the historical heroâ€™s temple to myself, here at the pagoda were groups of tourists, both Asian and Caucasian, even one with a tour guide. I wonder if it was to protect the latterâ€™s profession that no explanatory leaflet was available, in, say, French, Japanese and English. I made do with my ear-bitten Rough Guide.
The etiquette of some of the visitors surprised me and there was no official on hand to uphold standards. I have become Easternised and automatically take off my shoes on entering a pagoda. Most of the locals brought their slippers but the Westerners walked in with their shoes on. Most shocking of all, a Vietnamese lass marched in with high-heel shoes and rump in the air. On a previous visit to the pagoda there was even a monk with an incense stick in his mouth. I believe it had been manufactured by Benson and Hedges.
Once inside, everything was a feast for the senses. The building was of concrete but inside wood, very old, was the main building material. The mustiness of these beams, together with incense burns, provided a great olfactory experience. The mix of Chinese mythology and religions made for a great and highly varied visual display. On the altar there was a huge statue of the Jade Emperor himself. He, like St Peter in Christianity, controls entry into heaven. To his sides are further large statues, of the Four Big Diamonds, guardians, and the Taoist gods of the polar stars. The guide book says the Northern Star God represents longevity and the Southern happiness. To the left there is another room with superb wooden carvings showing the punishments that await evil-doers in each of the ten layers of hell. At the top of each of these are the judges of hell holding a book describing the misdeeds. Lastly, you should peek upstairs where there is a shrine to Quan Am, Goddess of Mercy, to whom women make offerings for fertility.
A world away from the luxury shopping malls and high class-hotels and restaurants of downtown District 1, Ho Chi Minh City, but still within its confines, one may find the down-to-earth wards of TÃ¢n Äá»‹nh and Äa Kao. Anyone with half-a-day to spare who is interested in the real Vietnam might consider a tour of the Jade Emperor pagoda, the temple to Tráº§n HÆ°ng Äáº¡o and two communal houses all within a single, square half-mile.
The quartet of colourful places of veneration renders a look at local life as well as an insight into Vietnamese attitudes toward religion, or reverence, that would be hard to encounter in more touristy areas. Furthermore, they offer great variety. The temple is dedicated to a national hero who upheld the country from existential threats. The pagoda is Disneyesque, a feast to the senses. The two communal houses give a glimpse into neighbourhood commercial and social activity, as well as reverence.
I have used the usual translations of names in Vietnamese of the institutions in designating them â€˜templeâ€™ (Ä‘á»n), â€˜pagodaâ€™ (chÃ¹a) or â€˜communal houseâ€™ (Ä‘Ã¬nh). They all â€“ more or less â€“ venerate deities, saints or heroes of various degrees, so it can be difficult for the uninitiated to distinguish between them in any other way than using the usual translations of the Vietnamese words that appear at the entrances.
Getting physically to the colourful quartet â€“ and colourful quarter, for that matter â€“ could not be easier. I got on a municipal bus in Hai BÃ  TrÆ°ng Street just opposite the Park Hyatt Hotel, and alighted on the same thoroughfare ten minutes later at the entrance to LÃª VÄƒn TÃ¡m Park. You may be in time to observe hordes of Vietnamese folk doing their own brisk-walking morning exercise. And you may not be the only soul around in search of sanctuary. In a previous â€˜incarnationâ€™ this was a French military cemetery and stories of haunting abound. Cross the park and exit at the gates in VÃµ Thá»‹ SÃ¡u Street. Cross the busy road and turn to the right. March for about a hundred metres and you will reach what was my first port of call, at number 36 VÃµ Thá»‹ SÃ¡u Street.

Left: Pigeons on a frieze of glazed sculpture on the outside of the Jade Emperor Pagoda. Right: Characters in the same glazed, sculptural style outside above the entrance.

Onward now and on foot away from the park and eastward following VÃµ Thá»‹ SÃ¡u Street I crossed a couple of busy roads and came to Mai Thá»‹ Lá»±u Street. This is an extremely crowded part of the city and traffic often streams on to the pavement, so I would not blame you for not doing this as a walking tour. You are in for close-up encounters with locals, cursing them as they honk you to yield your pedestrian rights to their motorbikes, or various interchanges with vendors as you negotiate the obstacle courses they have placed in your way. All good physical and kinaesthetic fun.
Along from the pagoda Mai Thá»‹ Lá»±u Street changes into Tráº§n Quang Kháº£i Street, and, in yellow and red, here is the neighbourhood ÄÃ¬nh Nam ChÆ¡n, 29 Tráº§n Quang Kháº£i Street. Again the front of the courtyard is a motorbike park. This was obviously a house of devotion, but it seemed deserted, so it could only be assumed that this parking was not for worshippers but for commercial reasons.
This bright house also features wooden rafters on concrete pillars but it is much newer. It seems to be dedicated to a female deity, judging by the statue on the altar gaily flanked this time by white horses and cranes on turtleback. To the left of the house is a large hall. When I visited it was full of youths practising martial arts. Although I have seen Kung Fu Panda and had all this explained to me I still find it hard to reconcile violent sport with peaceful religion. However, this, to my mind, together with the traditional Vietnamese apothecary at the right of the courtyard, adds to that lived-in charm of the place.
Sheer serendipity led to the second Ä‘Ã¬nh, or communal house, the smallest, the most homely but also the strangest of the pack. I was heading back to catch the bus when in the corner of my eye from a side street I saw red and yellow again. Upon investigation I came across the ÄÃ¬nh SÆ¡n TrÃ , with â€˜1950â€™ written on its facade. The address is 113A Nguyá»…n Phi Khanh Street, TÃ¢n Äá»‹nh Ward; it is at the intersection with Huyá»n Quang Street.

Half the forecourt was like a buildersâ€™ merchantâ€™s yard. They were loading up a truck with clinker when I appeared. Stepping into the house itself I encountered serried motorbikes parked right up to the altar. This was still an active place of reverence â€“ no attempt had been made to convert into anything else. Why not go the whole hog, though, and stick a motorbike on the altar and expand the dedication of the place? We could borrow a few statues of the gods of hell, line the flanks with plaster casts of lacerated limbs with holes and display wooden carvings of riders undergoing torments in hospital accident wards.