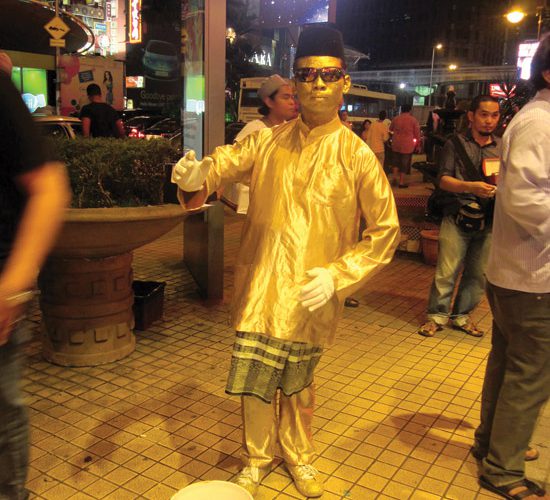 Putting it all together in Malaysia

It was October, 2012 and I had a one-week trip to Malaysia, at the invitation of Tourism Malaysia to the press to attend the Motor Grand Prix 2012. After an hour-and-a-half flight from Tan Son Nhat Airport, Ho Chi Minh City, I arrived at Kuala Lumpur International Airport, to meet my guide, Eddie Chok, 43-year-old Chinese Malaysian, working for Tourism Malaysia. The airport is gigantic and beautifully designed.
The weather in Malaysia was familiar to someone coming from Ho Chi Minh City. It was hot-about 30C. It would be sunny, and then a deluge of rain would fall from the skies, only to shut off as though someone had thrown a switch.
On the way to Kuala Lumpur centre, I saw a lot of green palm oil and coconut trees.
As in many cities, most of the residential areas were on the outskirts of the city. Houses were built in neat, uniform rows. They looked similar.
The landscape of the suburbs was quite deserted. However, 40 minutes later, when we reached the centre, it offered a much different view. The centre was so modern and busy with huge skyscrapers, hotels, shopping malls, trams, two-storey buses, a long row of cars on the street and a lot of tourists walking on the pavement.

I stayed in Grand Millennium hotel, on Jalan Bukit Bintang, a main street. The street always was crowded with cars and tourists from noon to night. I saw a lot of women in long, black dress, called abaya, covering their entire bodies from top to bottom, everything except their eyes. I couldnâ€™t see their faces even while they were eating. They put food in from under their masks. Eddie told me they were Muslims from Middle East. Muslim women in Malaysia wear scarf in their heads but cover their faces.
From the hotel window, I saw rows of cars which looked, from my vantage point, like a boyâ€™s collection of toy cars. The cars moved slowly in the perpetual traffic jam. Unlike Saigon, however, I rarely heard a horn in the street.
Eddie advised me not to take a taxi parked in front of a hotel, because these taxis charged more.
According to information provided by Tourism Malaysia, Malaysia is 329,750 square km. Population in Malaysia in 2007 was 27 million including 50.4 per cent Malaysian, 23.7 per cent Chinese and 7.1 per cent Indian and 7.8 per cent others. The official language is Malay. Besides English, Chinese and Indian are used often.
Kuala Lumpur is a paradise for shopaholics. Many famous world brands are featured in shopping malls such as Pavilion, Fahrenheit, SKIL and M&H. The shopping malls open at 10 a.m. and close at 10 p.m. A marketing employee at Sunway Pyramid Shopping Mall, outside Kuala Lumpur, told me that all shopping malls and outlets in Malaysia usually offer a discount of to 60 per cent to 70 per cent from July to August and November to January every year.
I loved the walking tunnels that connected shopping malls and hotels from Pavilion. Following a walking tunnel, I came to Trader Hotel, and went to the top floor to gaze at the Petronas tower, 452 metres tall, and the cityâ€™s top sight at night.
People are very friendly and not too shy to start a conversation with foreigners, but there are, of course, rules. Eddie told me not to touch a childâ€™s head and not to kiss someone in public places. He said that men would shake hands when meeting each other but women would put their right hand on their left shoulder and bow.

I visited Putrajaya City, the new capital of Malaysia, 25 km away from Kuala Lumpur. All government offices are here. Standing at Seri Wawasan Bridge, I admired the beauty of a city of trees. The man-made Putra Lake, 650 ha, was below me. The Putra Mosque, pink, with onion-shaped domes, looked like a grand palace mirroring in the lake. It can seat 20,000. The huge building at the end of a street is the Financial Ministry. A friend told me it is built opposite from Seri Wawasan Bridge on purpose. Seri Wawasan Bridge, the most beautiful bridge among nine others in the city, looked like a sail. It is believed this design will bring wealth for the Financial Ministry. Then, Eddie took me to a dock to take a sunset cruise. The cost: MR30 ($10) to MR50 ($16.45) a person an hour around the lake. The price depended on kinds of boats and included drinks, snacks and fruit.
I went to Sepang International Circuit, outside Kuala Lumpur, to see the racing event Motor Grand Prix 2012. The Grand Prix is the longest-running motorsport world championship, comprising 18 rounds in 14 different countries. The event was on 19-21 October, 2012 and attracted thousands of spectators. The race is 5,543 km long. There were many activities in the event, including motorcycle exhibition, autograph session, motorcycle stunt show, go-karts with riders and music.

I arrived at Malacca (or Melaca), after two hourâ€™s driving from Kuala Lumpur centre. Eddie told me a version about the origin of the cityâ€™s name; in the olden times, a king and his soldiers operated to this area and took a rest below a big tree. Suddenly, a small fruit fell to the kingâ€™s body. He climbed on the tree, picked the fruit, bit it and shouted â€˜Uhm . . . Ma . . . La . . . Caâ€™. So, the area was called Malacca. The word does not have a meaning. In fact, I tasted the fruit and understood why the king shouted, because the fruit tasted at the same time bitter and sour. The city has developed over 500 years into a trading post and cultural exchange point between East and West. It was a World Heritage site, recognized by UNESCO in 2008. Malacca was ruled, in turns, by the Portuguese, Dutch and British. Eddie took me to the Cheng Hoon Teng Temple, an old Chinese temple; Dutch Square with red buildings along the streets and colourful trishaws; Maritime Museum, a large wooden ship, exhibited ancient maps, model of ships and artefacts relating the maritime history of Melaka; and Jonker Walk with hundreds of Chinese shops along the street.
I took a 45-minute flight to Senai Airport, in Johor near Singapore, from KLIA Airport, and a 30-minute drive to a theme park, Legoland. It was launched in September, 2012 as the first Legoland Park in Asia and the sixth one in the world. It was set on a 76-acre area, divided into seven themes, and is comprised of 15,000 Lego models, built from 50 million Lego bricks. The highlight was Miniland, where Asian landmarks were recreated with more than 30 million Lego bricks, on a scale of 1:20. The price cost MR140 ($46) for adults and RM110 ($36) for children from three to eleven and senior citizens over 60.
Interestingly, despite all of the incredible architecture and scenery of the cities, it was at Legoland where the beauty of Malaysia was perfectly embodied. The imaginative toy block sculptures reminded me of the many cultures of East and West, multi-coloured and interesting, fitting and working together perfectly to create something beautiful that everyone can enjoy. I hope to return to that country soon.