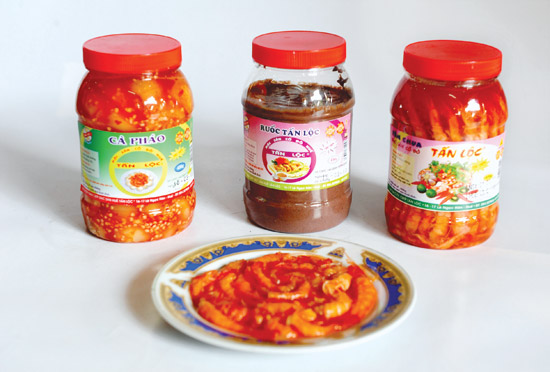 M?m ru?c, or fermented shrimp paste, is made from small shrimp. The final product is a purple- brown paste with the sweet taste of seafood and a strong odour.
I do not know exactly when the tradition of making m?m ru?c originated from my hometown; yet, it must date back to a long, long time ago.
I spent my childhood surrounded by giant urns of m?m ru?c. The taste and the smell of m?m ru?c were as familiar to me as the taste of new rice and the aroma of freshly-cut straw.
Each year, in spring and in fall, almost all families in my home village in rural Hue in central Vietnam would hold a ceremony to give thanks to the earth genie. Among the main traditional dishes offered to the spirits were m?m ru?c and boiled vegetables. The m?m ru?c must be pure, that is to say free of spices. The ingredients for the vegetable dish must be young shoots of sweet potatoes, which remains fresh and green even when cooked.
I went to Bo De high school in Danang and got the nickname ‘m?m ru?c guy’. It was then when it dawned on me that m?m ru?c was what that identified us, the villagers, and our homeland. Later on, after I immigrated to the USA, and until now, quite often I still wonder why Americans, while they love such fermented products as sourdough, cheese, yogurt and pickles, are not fond of m?m, the extracts from the fermentation of fish, shrimps, crabs, etc.
When it comes to m?m ru?c, westerners and many modern Vietnamese are mixed up between rotten food and fermented food. m?m ru?c is a fermented food and absolutely not something rotten.
In fact, some nations or groups of people around the world tend to like their food slightly spoiled. They have a reason for their own lifestyle. Food expert Henley McKenry studied the Botumm tribe in Middle Africa in order to find an explanation on slightly spoiled food. The reason he got from them was that even after elephants, tigers, etc. have died, their cells are not completely dead, and there are still spasms-the last effort to fight the enemy. Therefore, the consumption of fresh meat is unhealthy. The invisible antigens are yet to be tamed, or they’ll resist the humans’ body. The antigens are believed to cause indigestion, ailments, and aggression (A Review of the Strange Recipes; NY; 95).

M.D. Le Van Lan, a real expert, and in my opinion, he is by no means second to Dr. McKenry, said, ‘whatever deserves to be called m?m must be aquacultural products fermented with sea salt for a long time under the magic of nature’ (Research on Eating Habits, page 51.’)
Hue m?m is not just an aquacultural food, but the concept includes also local agricultural products such as cucumber m?m or eggplant m?m.
Throughout human history, rock salt, with its two basic elements, sodium and chlorine ions, has worked as country people’s antibiotic, a wonder medicine for thousands of years, a treatment for sore eyes, lumps, bruises, stomach aches and toothaches.
For Asian nations, m?m making is a natural way of survival. Mountain tribes in Vietnam, Laos, and Cambodia preserve their wild game by exposing it to smoke until it is dry. This is similar to Westerners’ meat smoking practice. Meanwhile, lowlanders and sea folk save their food by salting, sugaring, pickling, or fermentation.
Salting and fermenting are very similar. Salting is the preservation of food with dry edible salt. Fermentation is also a process of controlling bacteria, yeast, and moulds to keep food from going bad, but with other herbs and spices added to make it taste more like m?m.
If only Chuong Duong Street in downtown Hue were renamed M?m ru?c Street, like how Kim Chee Street in South Korea, Teriyaki Street in Japan, or Yogurt Street in the USA are named after fermented dishes. Chuong Duong Street is lined with m?m stalls of all kinds, all tastes, all smells, and all colours. The yellow-green pieces of fermented veggie, which are both eye-catching and nose-catching, remind passers-by of traditional home-cooked meals and make their mouth water.
M?m ru?c stalls also dominate the rural areas surrounding Hue city. They can be found right in the gateway to the village, at the open-air farmer markets, just about everywhere.
Throughout the year, Hue has a specific kind of m?m for each season.
In the winter-spring period, there are scad m?m, flying fish m?m, mackerel m?m, tuna m?m or sour shrimp m?m. In the spring-summer period, there are a whole variety of vegetable m?m. For the fall-winter time there are anchovy m?m or consorted m?m, which are the extracts of more than one kind of fish.
The kinds of m?m which are available at any time are sour shrimp paste, heavily-spiced fish paste (m?m nem), or oyster paste. The authentic paste is the one made from Lang Co oysters, which is the oyster paste champion. However, generally speaking, oyster paste, no matter where the oysters come from, is good.
M?m jars were technically Vietnamese people’s most ancient refrigerators. In the old good days, fish and shrimp were abundant; the folks preserved them for the rainy days. M?m was not just the food of the poor; it was also a delicacy of upper-class people.
From the original m?m nêm (heavily spiced fish paste), Hue people have come up with a wide variety of m?m, and each has its own taste and smell.
However, all in all, Hue m?m can be grouped into three categories: salty, sour, and sweet.
The original and most common is nam nem, which can be made from anchovy, baby scads, or hakes. Rural Hue people make m?m nem by mixing fish paste with fresh hot pepper, ground hot pepper, lemon juice, sugar, garlic then dip pickle, or fig fruit and eggplants in it. M?m nem is a unique condiment, which goes very well with rice, boiled vegetable, rice cakes, or soup. The strong smell of m?m nem is required for jackfruit and wild betel leaf soup, Indian taro soup, and leopard silk soup. M?m nêm also makes the soul for the rice noodles of Hue and Danang.
Fermented sour shrimp (m?m tôm chua) is also a kind of m?m but Hue people don’t call it that; instead they name it just ‘tôm chua’- sour shrimp. This kind of condiment can be found throughout the country, yet made-in- Hue tom chua is still the best. It features the special aroma of gangling ale root, garlic combined with the sweet taste of shrimp meat. Sour shrimp with boiled bacon pork and pickled mungbien sprouts is just irresistible; cucumber and lettuce when added will just make it more than perfect.
Eggplant m?m is very also very popular in Hue. By the end of spring, the skinny limbs on the eggplants are laden with fist-size fruit, white, or green. This happens to be also the season of anchovy and scad. Slices of juicy and fresh eggplant look as if they were just picked. The fish juice soaked in makes the skin and the core of the eggplant stick together and the whole thing crispy. Eggplant m?m can be made from raw eggplants, steamed eggplants or stewed eggplants. My favourite type is brewed eggplants brined in small shrimp paste mixed with hot pepper. It makes a perfect meal on a winter day.
According to physician Pham Tue, fresh eggplants are yin and are not recommended for sick people whose body contains a higher level of yin elements. When supported by salt, eggplants become yang. Dipped in shrimp or fish paste eggplants are then both yang and nutritious and become a good food for the winter when human body needs a lot of energy.
M?m ru?c has many functions in the Hue people’s daily recipes. When added with lemon juice, garlic, hot pepper and sugar, it is the condiment for fig fruit, pickle and star fruit, which is the favourite snack food for Hue people. M?m ru?c is also the base for almost all the local recipes, without which the dishes would be tasteless, like soulless good-looking eyes.

Like most of other Hue dishes, vulgar m?m also found itself a place on the royals’ dining table overnight.
In Vietnam’s very first royal cookbook ‘One Hundred Recipes’, Truong Thi Bich described the ways to make fancy m?m such as mullet m?m, rabbit fish and roasted rice m?m , baby tuna m?m , tuna guts m?m , tuna and eggplants m?m, soup base m?m, heavily-spiced m?m, crab roe m?m, or fermented sergestid shrimp. The m?m mentioned there is all very complicated and requires great caution and attention to details. To put it in another way, it is a real piece of art.
In 1960, the Thai royal couple paid Hue an official visit. Ngo Dinh Can, the warlord of central Vietnam at the time, held a thoroughly-planned welcome party for the king and the queen. Of the 10 Hue delicacies made with m?m ru?c, the most popular was eggplants with tuna paste, prepared by Ha Thi Da from Tay Loc, which was started half a year before.
First, the guts and the gills of fresh tuna were kept, and then they were then thoroughly cleaned, and drained before being salted. The fish-salt ratio was either 6-1 or 4-1. (The saltier it is, the longer it takes for the m?m to be ready). The mixture then was stored in a big jar, well pressed and sealed and put in the sun for successive 15 days. When air bubbles appeared on the top of the jar, it was time to prepare the eggplants.
Eggplants must be the white kind, not too young not too old. The stem has to be maintained while the green part removed.
Next came the soaking of the eggplants in salt water overnight. Then they were rinsed with water the next morning, then drained and dried in the open-air shade.
The last step was mixing the eggplants with the tuna paste, adding garlic, galanga roots, hot pepper, and sugar. The mixture then was put under the sun for 15-20 days before serving.
Poet Pham Nha Uyen, currently residing in Stockton, USA, said the Thai royals complimented the dish; and the Hue government awarded his mother, Mrs. Ha Thi Da, a sum of money large enough to build the family’s kitchen.
The uniqueness of m?m lies in the regional recipes. In the south, there are many kinds of m?m, Thai m?m, cod m?m, mud carp m?m, dwarf gourami m?m, snakehead m?m, butter catfish m?m, knife fish m?m, freshwater crab m?m, small shrimp m?m, fish gut m?m, you name it. Yet, only adventure-lovers have the chance and the guts to try rat m?m, turtle m?m, cobra m?m, or frog leg m?m, as the preparation of those kinds of paste requires extreme experience and expertise.
In the central-land region, there are fish gut m?m of Phu Yen or Khanh Hoa, cod m?m of Phan Thiet, squid m?m, pineapple fish or shrimp m?m, flying fish with roasted rice m?m of Quang Nam.
Meanwhile, the North is home to saltwater crab m?m, small saltwater shrimp paste, and sand-worm m?m.