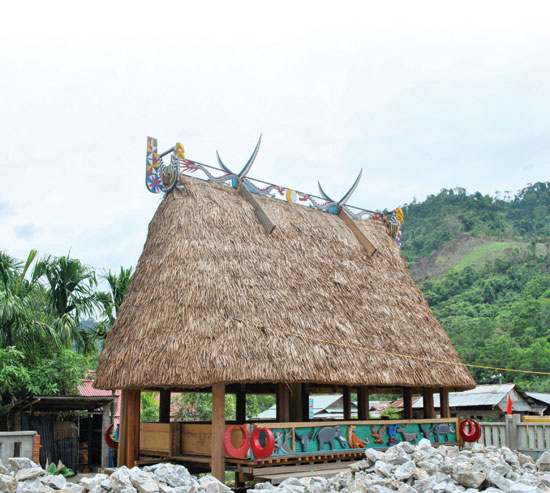 Almost every Co Tu village has a guol house in the middle. In the Co Tu
language, ‘guol’ means communal. So, the guol house is the house that people in a village share for community activities.
In the minds of the Co Tu people, the guol house is a sacred place, because it is the living space of their ancestors and deities. It is also where they conduct meetings, rituals and
ceremonies, and keep the village’s most
valuable possessions.
The Co Tu people are also called Gao, Ha, Phuong and Catang. They live in the
mountainous areas of mid-Vietnam and lower Laos. The total population is over 76,000, of which 61,588 people live in Vietnam, mostly in Quang Nam Province,
according to 2009 statistics. Among eight highland districts of Quang Nam, the Co Tu people are distributed most densely in Nam Giang, Dong Giang va Tay Giang Districts.
Many consider the guol house a kind of live museum of the Co Tu traditional art of
sculpture. The art found in guol is quite rich and diverse, expressing spontaneous perception of nature, the world of trees and animals, and the everyday life of the Co Tu people.
The front and back wooden boards and the transverse beams inside the guol house are the ideal places for Co Tu folk artists to
create their works of art.
Among the themes expressed in guol, monkeys very often have a prominent and lively presence.
The Co Tu monkeys may be carved from a log, or carved in relieves on wooden boards. They may also be sketched, and then color painted as a picture, which can be quite
realistic.
Wood carving is the most prevalent means that Co Tu folk artists use to add
aesthetic value to their unique traditional architecture and to beautify their beloved village.