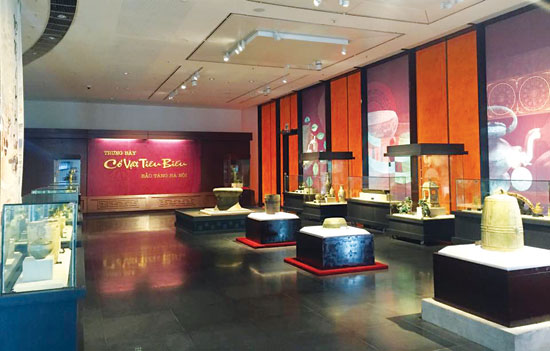 In working sessions with foreign designers, the scenario drafters, science committee and the museum’s specialists have studied deeper to decide the content that must be showcased and to propose the types of documents and artefacts that must be present, many of which must be further collected, since the museum doesn’t have enough of them.
It is a big task that requires much effort from the scenario drafters and Hanoi Museum specialists, especially a lot of know-how and talent from scientists of many different disciplines, such as museology, archaeology, art, architecture … The new approach requires innovation and dedication. The participation of New Zealand specialists in the total design and that of Japanese specialists in detailed design are crucial. Today, the specific design of the exhibitions of Hanoi Museum is basically complete and has achieved significant success.

Hanoi Museum is currently finishing the outdoor themes, content topics 1 and 2 on the 2nd floor of the building, at the same time finishing the design of the remaining topics on 3rd and 4th floors. Apart from that, the museum has also done many topical exhibitions for the public, the most recent being ‘Typical Antiques of Hanoi Museum’. Soon, to celebrate Cultural Heritage Day (Nov 23rd, 2015), the museum will collaborate with ‘Vietnam Heritage’ magazine to organize a photo exhibition on the topic of Vietnamese cultural heritage. In recent years, cultural activities become more and more frequent and higher quality, thus attracting more attention and appreciation of the community. This is the right path to the future, when, with the completion of the display content under the official design, Hanoi Museum will become a cultural destination, truly dear to the people of the capital, all compatriots and foreign tourists.n
Hanoi Museum
2 Pham Hung St (next to Vietnam National Convention Centre), Me Tri Commune,
Tu Liem Dist., Hanoi
Tel: (04) 6287-0604