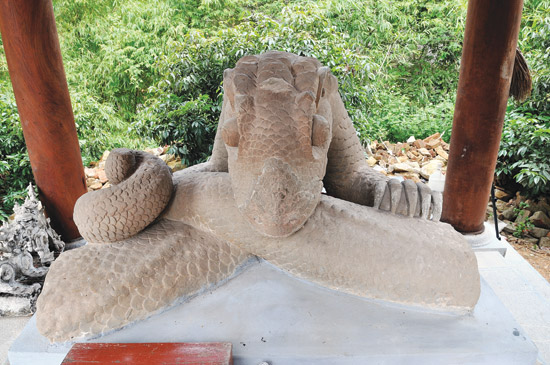 The front and the side of stone dragon (snake deity) statue
at the shrine of Le Van Thinh, Gia Binh District,Bac Ninh Province

The stone dragon at the temple dedicated to the worship of Le Van Thinh is extremely strange; its mouth and claws tear its own body. But some say that this is a snake, not a dragon.
The temple of Le Van Thinh was chosen by Bac Ninh Province to be one of four historical sites to host the celebration of the millennium of Thang Long. 50 metres below the surface, archaeologists have found a treasure; two sections of a dragon statue, each about 60 centimetres long, 35 centimetres high and 40 centimetres wide. Most importantly, the dragon’s legs and feet are completely intact, with sharp claws deeply ripping into the body.
Remarkably, it was fully compatible in terms of material and style with the statues in a temple of a snake deity nearby. That’s why the national treasure certification for the statue in the temple of Le Van Thinh reads, ‘relatively unique and intact.’
According to the relic management bureau of Bac Ninh, the two newly -found fragments don’t fully connect to the statue. That made many guess that there could be other sections. They began hoping to find the remainder of the sculpture when excavating related areas in the future.
The official public records of Bac Ninh Province clearly say: ‘This is a unique dragon statue, half snake, the other half, the bearing and claws of a dragon. Such a symbol has never been found in the history of Vietnam or South East Asia.’
‘The dragon was found in an area which used to be a part the property of Le Van Thinh, who won the very first erudition contest of the Ly Dynasty in 1075. So, many think that it reflects the drama of the injustice that he endured in the Dam Dam Lake case during the reign of King Ly Nhan Tong,’ the file says. Dr Le Dinh Phung, head of the historical archaeology department of the Institute of Archaeology of Vietnam remarked, ‘That’s a very unique case, a dragon shredding itself. Common opinion is that this is a vindication for Le Van Thinh.’
After earning the prize, he became the head of the Ly court of the time. At the prime of his success, he was convicted for ‘turning into a tiger to kill the King’ in 1096 and was exiled to Thao Giang. The Book ‘Great Viet Full History’ recorded the episode. The King went to Lake Dam Dam on a small boat to watch fishing. A cloud covered the boat, and he saw a tiger in it. That’s why they thought Le Van Thinh intended to kill the King.
In the opinion of many, the image of a dragon biting itself reflects King Ly Nhan Tong’s regret for wrongly suspecting his head of court. One ear is intact, the other ripped off; that symbolizes his listening to the false accusations.
Although experts are relatively unanimous on the meaning of the statue, the name of the ‘lead character’ and its date remain controversial. The national treasure certification calls it by both names, stone dragon and snake deity. The date is recorded as being during the Ly Dynasty.
Nevertheless, Dr Le Dinh Phung said, ‘In don’t think it was made during Ly Dynasty’s reign. The dragon belongs to Le Van Thinh shrine. He suffered injustice and was exiled in that time, so it’s hard to believe that he would be enshrined right after his death. It must have been done later. Only the subsequent era could understand and do such a deed.’
Dr Phung also thinks that the statue’s style deviates too much from the common standards for dragons of Ly era, so it could not have been made then. ‘Thang Long, Phat Tich, and Doi Son dragons are very much the same. This one is out of the frame of art of the time. I would say that it belongs to Le era. That’s my personal opinion,’ he added.
But Dr Tong Trung Tin, Chairman of the Vietnam Association of Archaeologists, a member of the Board of Scientific Assessment of National Treasures, thinks that it is a snake. ‘A dragon cannot be in a shrine of a mandarin. It’s an exclusive symbol of kings. This is a snake deity. I myself proposed to call it a snake deity in the certification. In terms of technical and stylistic elements, it is very typical for the Ly era,’ Mr Tin said.
The certification reads ‘Stone dragon (snake deity), Ly era, currently kept at the shrine of Le Van Thinh, Gia Binh District, Bac Ninh Province.’

Text by Trinh Nguyen and photos by T Group