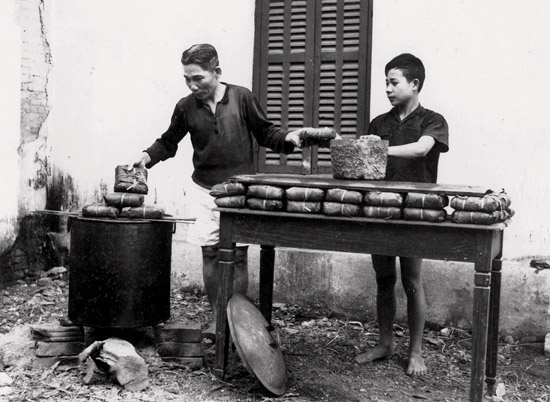 Cakes part of a fertility cult

Legend has it that hundreds of years before Christ the Vietnamese made two kinds of cakes, bánh ch?ng and bánh _d?y, for T?t.
Bánh ch?ng is a square cake that would fit on a dinner plate. It is wrapped in phrynium leaves and coconut leaves. It is still a must for the Vietnamese Lunar New Year. Bánh means ‘cake’ and ch?ng might mean bain-marie. The cakes are put into a pan of water and cooked as long as ten hours. The cake is of steamed glutinous rice stuffed with fat pork, beans and shallots.
Bánh d?y, about the size of a doughnut, is a round cake wrapped in banana leaves. The cake is of steamed, pounded glutinous rice. Bánh d?y is no longer a feature of Vietnamese T?t but still part of the New Year festival of some ethnic minorities in Vietnam, such as the Hmong and Hà Nhì.
The words ‘glutinous’ and ‘gluten’ are both derived from ‘glue’ according to the Concise Oxford English Dictionary, but sticky rice (or ordinary, for that matter) does not contain gluten, according to a book review by Alison St Sure at amazon.com.]
The late professor Tran Quoc Vuong, a well-known expert in culture, history and archaeology, noted the following about the cakes:
Originally [in the first millennium before Christ], the bánh ch?ng was not square. It was a log. Even today, in Co Loa village, Dong Anh District, in suburban Hanoi, bánh ch?ng is mostly this shape.
The interpretation that the square bánh ch?ng symbolizes the earth and the round bánh d?y represents the sky accords with a prevailing belief in ancient China that ‘The earth is flat and square, while the heavens are round’. The idea was later imported to Vietnam and is not home-grown.
It is more Vietnamese to say that, like the pestle, the cylindrical bánh ch?ng symbolizes the male reproductive organ and that the flat, round bánh d?y symbolizes the female reproductive organ, the way a mortar does. The cakes are part of a fertility cult.
When the square bánh ch?ng is placed on the ancestor altar, it is in pairs. As a gift, it is in pairs. Likewise, mats are rarely purchased individually. [Bánh d?y also goes in pairs.]
The special thing about bánh ch?ng is not just the ingredients but mainly the way these are arranged. The shape, colour, smell and taste of the bánh ch?ng cannot be mistaken.
The invention of the bánh ch?ng is credited to Prince Lang Lieu, a younger son of King Hùng VI [the Hùng Dynasty was from 700BC to 208BC].
Huu Ngoc, in the book Wandering Through Vietnamese Culture, The Gioi Publishers, Hanoi, 2008, wrote the following:
The bánh ch?ng for the Vietnamese T?t is as sacred an item as roast turkey for Christmas in some European countries. Its origins date to the Bronze Age in the Red River delta. Its story is told in L?nh Nam Chích Quái (Strange Tales of L?nh Nam), a collection of stories written in the 15th century.
The 6th king of the Hùng Dynasty, growing old, wanted to choose his heir. Addressing an assembly of his many sons, he said: ‘Go out into the world and bring back the recipes of the best food you find. In a year’s time, you must be back and the one with the recipe I like best will be my heir.’
The princes set out on their journeys with retinues of various sizes. The 16th prince Lang Lieu, orphaned by his mother at a tender age, had few resources. He stayed at home, sinking into dark thoughts.

One night, a deity appeared to him in dream and said: ‘Don’t despair, I will help you. You know that rice is the staple food of men. Take some glutinous rice and steam it: shape it into round cake, the form of the vault of heaven, and make another cake with square shape of the earth which you will stuff with beans and meat, the symbols of the country’s plants and animals. Use the cakes as offerings to your father, paying tribute in this way to earth and heaven.’
The prince, on waking, did as he was told. When the long awaited date arrived, the princes all went to the king bringing with rare and precious fruits and fish and spices with captivating aromas.
But their offerings did not please their father, who found them worthy only of curiosity and, moreover, difficult to procure.
When he learned of the supernatural origins of the recipes used to make the round and square cakes, his choice was made: he picked Lang Liêu’s offerings and made him his heir.n