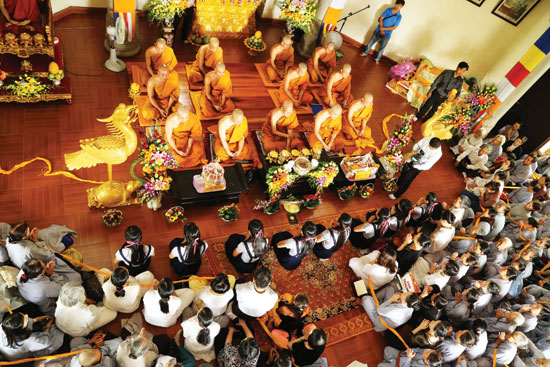 Hue is among the places said to be the cradle of Vietnamese Buddhism. Buddhism has ancient roots in Hue, where now is home to more than 300 pagodas in Mahayana Buddhism.
The former feudal capital city, Hue, is also the pilgrimage destination for millions of Buddhist followers annually. Buddhism theory and practice have infused the lifestyle of local residents for centuries and they play as unique elements to local culture.
Many pagoda buildings, together with the lifestyles of locals, stand as heritage items, tangibly and intangibly, in the city.

In recent decades, the availability of Theravada (or Early) Buddhism pagodas in the city has enriched the practice of Buddhism in the locality. The annual alms-giving Kathina ceremony is usually held in October. Monks normally walk around the neighborhood to receive food donations every day. But from the 5th lunar month to the 8th lunar month, they stay in their pagoda all day for a three-month retreat. At the end of the three-month retreat, the Kathina ceremony is held to celebrate.
Buddhist followers at the locality welcome the Theravada system as well as the Kathina as one of the best ways for them to go deeper in the practices that resemble those performed by Buddha.

Followers parade to offer gifts to monks during Kathina.

The key of the ceremony is the alms-giving ritual, which is conducted in the very strict rule of the monkhood and shows highest respect from followers to monks and from monks to Buddha.
Kathina could be considered as part of the Early Buddhism’s heritage and sometimes, it creates borderless exchange between people with Buddhist belief in different countries, just like the visit by Thai Royal Family last October to Hue’s Huyen Khong Son Thuong pagoda for Kathina.n