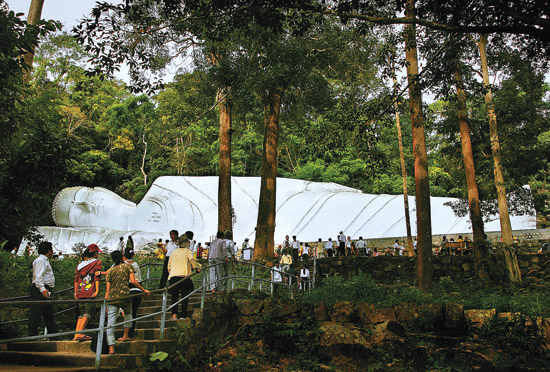 Buddha on a jungle-clad mountain

T he record for the longest reclining Buddha statue in Vietnam was broken in 2010. The new holder, at 52 metres, is at a pagoda in the town of Thu Dau Mot, near Ho Chi Minh City. However, it is the previous holder, three metres shorter, which is supposed to represent the number of years Siddhartha Guatama lived, that is still attracting all the attention. Hewn from a single chunk of white marble it was made of cement when I was there and 11 metres high, it rests near the top of the granite Ta Cu mountain, in Binh Thuan Province. Most foreign tourists are just whisked by on a bus taking them to the beaches of Phan Thiet and Mui Ne. Even if they do know of it, it may be too much trouble for them to backtrack the thirty kilometres or so to the site. As a result, the vast majority of people coming here are locals. If you do manage make it you will be well rewarded for your efforts. On my first trip here there was just the mountain, which you had to ascend and descend on foot, a new pagoda and the statue. Now Ta Cu is a fully developed tourist area with landscaped gardens at the foot and a cable car with smart restaurants alongside both top and bottom stations. Ta Cu also offers you the opportunity of experiencing the South East Asian jungle on a short, safe and easy trek. There now follows an account of my third and recent visit to this sacred and inspiring place.

I had no trouble getting there that day, as we were staying near the mountain at my sister-in-lawâ€™s fruit farm. The most hair-raising part of the day was the short trip along National Route 1 on the back of my brother-in-law’s motorbike with lorries and long-distance buses thundering by. We arrived safely at the gates of the tourist area, which is half-a-kilometre down a quiet lane branching off this main thoroughfare. There are various ticket options. Nguyen Minh Thu, at 63, had a return ticket for the cable car, which cost VND75,000. I, being a sprightly 56, was going to accompany him up but walk down. I paid VND55,000 for this. If you just want to enter and either just enjoy the gardens at plain-level, perhaps have a picnic or meal in the restaurant and/or go on a paddle boat on the lake or walk both ways, up to and down from the pagoda, the charge is VND15,000.
From the gate it is a short and pleasant walk through lovely gardens to the cable-car station. However, there was a golf-cart-type train awaiting us, into which we climbed, and were were brusquely and rudely carried away at a speed far too fast for my liking. We climbed some steps to the accompaniment of Julio Iglesias singing on the public system and entered our bright shiny cabin. The cable car is Austrian, with automatic opening and closing of the doors. The length is 1,600 metres and it takes you through the jungle just above the highest trees to 505 metres above the plain. You can sit back and enjoy the magnificent scenery of fruit farms and brick fields with mountains out on the western horizon. Then, after hitting the top, the line goes down for a couple of hundred metres. Here you should turn around and view the sweep of the coast going all the way to Ba Ria Vung Tau Province, with the islet of Ke Ga in the near distance. Just as we reached the top station I espied a large black bird of prey, which I took to be a good omen.
From here getting to the actual Buddha statue involves a little walking and climbing of steep stairways. First you walk a hundred metres or so on an even path. Give yourself ample time now to take in the shoreline and forest below that you may have just glimpsed from the cable car. Then walk up a long and steep granite staircase to the pagoda. Although this dates back to the 19th century, much of it is new and indeed still under construction. To the left you follow a path and, passing some graves with inscriptions in Chinese, you come to a platform area with three tall male and female statues alongside each other. They are quite beautiful. They are named Di ÄÃ  Tam TÃ´n, in Vietnamese, and the tallest reaches six-and-a-half metres. Then, a little further along, turn left and walk up another tiring staircase to meet the reclining Buddha of Siddharta Guatama entering nirvana. If you are not breathless already from the climbing you certainly will be when you feast your eyes on this amazing sight. Not only is he 49 metres long but he is seven metres tall, and positioned on a six-tiered granite plinth all along. â€˜How on earth did they get this huge white marble chunk up here?â€™ I asked brother in law Anh Thu. â€˜Airliftedâ€™ came the reply. I should add that all the way on this walk we have met only Vietnamese tourists. Anh Thu has been met with constant enquiries as to my identity. So much so in fact that for most of them it seems that I am the tourist attraction and not the views, the pagoda and statue.

It remains for me to give an account of my journey down on foot. Before I begin I would urge you to be more prepared than I was. Firstly, I did not have the right clothes. I was wearing trousers and my normal working shoes. I had no walking stick for support. I was going alone, which is a bit foolhardy. In my favour I exercise a lot and am reasonably fit for my fifty six years, and my daughter was to check up on me by cell phone. As I parted from my companion at the cable car station and set off on the narrow path I felt like the White Rabbit in Alice In Wonderland. Trees pressed in on me on either side and the canopy obscured the sky. The sensation was of descending a tube of vegetation. You heard on occasion the eponymous sound of the Táº¯c KÃ¨ lizard and the tweeting of birds but the prevailing noise is that of a constant whine like that of electricity passing through a wire. At first the way was rough, as I clambered slowly down over rocks, placing my foot on the roots of trees with their branches and bamboo stalks for support. For the first thirty seven minutes I come across just one other walker. Then I reached a properly made staircase, which was just as well, as the path was now steeper. This staircase continued to almost the bottom but was broken in many places. From then on I came across parties of chirping youngsters on their way up. I do not think there was another climber even half my age that day and I felt in fine fettle as I heard several of them wheezing and complaining of exhaustion. There were a number of resting-spots with benches and I descended the mountain at a slow and cautious pace. The first time I was on this mountain, before the cable car, there were shacks with people selling refreshments near the top and bottom. These are still there but the only soul around was a dog guarding one of them.
You will know when you are approaching the end. First there is a break in the trees and you can see cars gliding on the cable above. Then you reach a small stream. On this occasion I startled a number of birds there. Then suddenly you find yourself at the level of the bottom station and, jubilation, you have just another hundred metres of unmade path and rocks ahead to find yourself back in the park. It had taken me an hour and forty minutes. I confess to having felt very stiff but I was also very pleased with myself. Although my aim had not been to break any records but rather not to break any bones, my time was just five minutes more than on a descent I had made six years before.
I hope I have whetted you appetite for safe adventure and that more English-readers will put Ta Cu on their tourist itinerary. There are scenic views and a cable-car ride which can be fun for young and old. Whilst one may have pagoda fatigue, the magnificent reclining Buddha will be new. If you are coming to Southeast Asia, some direct experience of the jungle is a must, and this is a safe and easy place for it.n