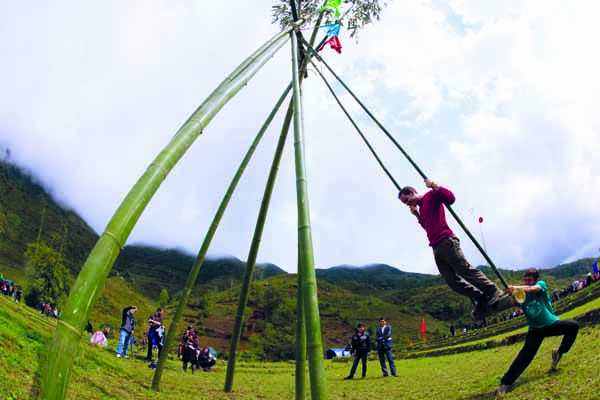 Breaking The Sun And Moon

Roong Pooc, meaning ‘Down to the Fields’, is the Giay people’s spring festival, which ends the month of leisure (New Year month) and starts a new working year with new crops. It also includes a ritual of consecration to the tutelary god to pray for his blessing for plentiful harvests, fat domestic animals, peace in the community and health for the people.
The elders say that nobody knows when the custom began, but every Giay person in Ta Van Giay Village of Ta Van Commune remembers having been attending the festival on 10th day of the first lunar month every year since the day they were born.
The preparation steps for the festival are assigned among the community and conducted in earnest. Five virgin girls are selected to make colorful balls from scraps of fabric. Young men are tasked with finding a tall straight tree, cutting it down and transporting it back to the village but not letting it touch the ground during the whole process to not let the soul of the tree back to the earth. The elders are required to make and decorate the sun-moon ring, covered with a paper film, red on one side to represent the sun and blue on the other side to represent the moon. The ring itself stands for the yin-yang harmony.
At a set time, the host ties the sun-moon ring to the festive tree top, about 20 arm-spans from the base. In Giay custom, the Pi-le pipe band is the official signal of  the appearance of the host, village elders, and the tray of offerings to the King of Heaven, gods and Deities. As the tray of offerings is set at the place intended for the festive tree, the elders burn incence and the host turns to the direction of the rising sun to conduct a ritual asking the gods’ permision to plant the tree for the festival to begin. The host casts tablets until he gets the head-tail combination which means the gods have granted them their blessings. Gold votive papers are burned and offered. The host makes a sign for the young men to firmly plant the festive tree with the sun side of the ring turned East and the moon side turned West. After the tree is set upright, the hosts casts his tablets again untii he gets the head-tail combination again, which this time means all gods are present and the activities can begin.
Then the host invites the most respected village elders to stand on two sides of the tree, four men on one side and four women on the other side.They begin throwing blessed balls at the paper film covering the sun-moon ring, trying to break the film. One side throws the balls, and then the other side picks them up and throws back until the film is penetrated, which is the good omen for a prosperous new year. As the film is broken, the host casts blessed seeds, which supposedly have divine energy and are powerfully reproductive, for people to scamble to pick up.
The day goes on with a lot of fun and games, and the spirit  builds up in the cold weather in the mountains. The game of tug-of-war is always the height of all the festivities. After the game, a pair of big, strong buffalos are brought to plough several  furrows in a field next to the festive tree, symbolically starting a new crop.

*The article in Vietnamese version was printed on www..vnquydisan.org