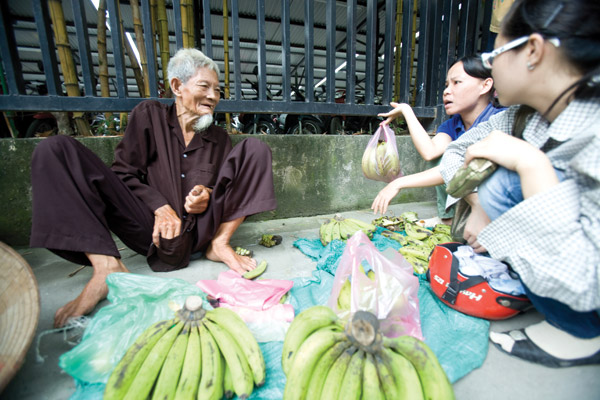 admin8 December, 2019
Culture0 Comments 0
Mr Nguyen Trung Khanh, 82, from Bai Village, Cao Vien Commune, Thanh Oai District, Hanoi, rides an old bicycle with no brakes with two baskets of bananas to sell more than 25km from his house every day at Ha Dong Market, about ten kilometres from the centre of Hanoi.
‘On an ordinary day, I leave my house at daybreak’ Mr Khanh said. ‘But on the first and 15th days of the lunar month I have to leave at three o’clock in the morning and take more bananas.’ On these days many Vietnamese offer cakes and bananas to their ancestors and deities.

The trip takes almost three hours.
Sometimes the bananas sell fast and Mr Khanh can begin the return trip at three in the afternoon. Other times he has to circulate more and doesn’t get home until 8 or 9.
The round trip is 50 km, on top of which may go kilometres to and along the streets of downtown Hanoi.
Mr Khanh usually breakfasts on sticky rice and rice-flour steamed rolls no longer hot. Ms Mai, who sells sticky rice in Ha Dinh, said, ‘He eats only sticky rice, to survive . . . for breakfast and lunch . . . for years. Sometimes I feel sorry for him. I don’t know what his family situation is . . . he still has to work for a living at such an old age. I sometimes urge him to retire and leave the work to his children and grandchildren but he just smiles without saying a word.’
Mr Khanh married at 30. He and his wife live with their second son, Mr Nguyen Trung Dien. Mr Dien and his wife also sell bananas.
The day I observed Mr Khanh, it suddenly clouded over and began to drizzle. He pushed the bicycle, with less than a half of the bananas remaining, to a wall, covered them with a sheet of plastic, found shelter and put something from a bottle on his feet. He does not wear shoes. ‘Rain has been falling the past few days,’ he said. ‘The water has hurt my feet. They even bleed. It hurts a lot. I’ve bought this bottle of medicine . . . It is troublesome to wear shoes. This morning, a young woman insisted on giving me VND20,000 ($US1). She said I looked like her grandpa. I refused to take the money. I’m not a beggar. I simply sell bananas for a living. But she threw the note in my basket and ran away …’
‘I used to split wood at a factory in Ha Dong before I began selling bananas. The wood-splitting unit at the factory broke up and I returned to my home town to buy bananas and carried them to the capital to sell. At first, I used to stand around Ha Dong Market. In those days, I had to pay the French soldiers before I could stand around there.’
Mr Khanh used to be one of many people from Cao Vien Commune who carried bananas on their shoulders to Ha Dong to sell. Sixty five years later he is the only one from the commune still on the job, though he has been riding a bicycle for more than ten years. He learnt to ride, because it would be easier than walking, when he was over 70. ‘I fell and hurt myself several times but when I could ride a bicycle, I found how near Hanoi was to my home town …
‘The capital is now much more beautiful than it was. The streets are busier, lots of tall buildings have been built and most people go around by motorbike or car. At times I feel like a fish out of water as I ride my old bicycle around. Well, it is all right. I’m old now. I can just count the days I can live and have no idea what tomorrow will be like. As I am still alive and feel fine, I just go around selling bananas, because Vietnamese people always need some bananas among the things they offer to their dead ancestors no matter what changes have occurred.