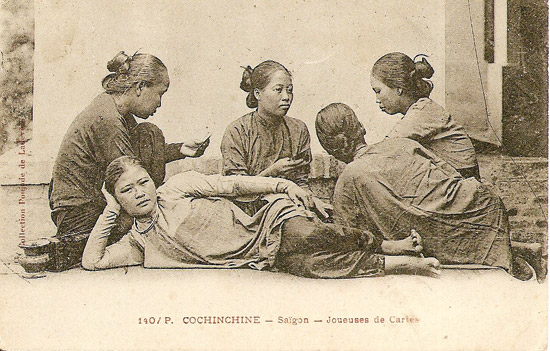 It is hard to imagine Ho Chi Minh City without the motorbikes and throngs of people. But if your mind’s eye is not quite up to the job, then there is a wonderful compact coffee table book of picture postcards to whisk you back to the calmer days of yesteryear. Over the ten years he has been coming to Vietnam, M. Philippe Chaplain has assembled a remarkable collection of images that not only show you how familiar landmark buildings and places used to look, but also documents the daily ways of life of ordinary people in the city once known as Saigon that have long since gone.
The book, with text in English and French, is entitled ‘Saigon: Pearl of the Far East, La Perle D’Extreme Orient’. It is divided into six sections: Architecture, Ceremony, Daily Life, Theatre, Transport, and Women. I refer to this book as ‘coffee table’ in the best sense of the phrase, as the pictures are accompanied by informative and well-written commentary. This is a tome to be shared, as there is much to stimulate conversation. My English conversation class of mature students found it gave them much about which to reminisce.

Despite the wrecking-ball havoc that Saigon has undergone in recent years, there remains plenty of old buildings to appreciate. Some, however, can only have their memory preserved in pictures such as these. Even some of the survivors show a marked difference in character or exist in a different architectural context than before. The Ben Thanh market in a brownish image with horses and carts in front of it seems a ghost of its present self. Another picture shows the first Saigon Railway station with a train in the square opposite this iconic market, where now there stands a bus terminal. The present-day station is depicted when it was new; a mud road with only four people in front of it.
The Buddhist monks and priests in the ‘Ceremony’ section look more ascetic and serious than those of our time. Were it not for the robes of the participants the Cho Lon dragon procession and rich man’s funeral, however, things have not changed that much. Also included are a row of scholars in their academic gowns, who look as if they have stepped out of the Temple of Literature and a charming shot of a young lady serving tea to her elderly mother.
As one looks at the people caught by the camera in just an instant as they were going about their daily business, the realization of the fleeting nature of life is rammed home. All of these folk, even the baby with the cowboy hat in his wicker chair and the little children collecting water and at their sewing work, have long since now passed on. We see how the clothes people wore were different then. Globalisation, in this respect, has not bypassed Vietnam. Yet the essence of human life has changed little as we see the forebears in outdoor markets, working as street vendors and a family gathered together at dinner around the rice bowl on a long wooden table. Strange to think I might be that every day passing by in Saigon’s streets the great children of these ghosts captured on film. Rural life, too, remains the same, though maybe not for much longer will we be taking snaps of bullocks ploughing the rice and farmers straining their backs to plant it.
A flick of the page and it is back in time on a trip to the theatre of days past, which, of course, assumed greater importance in times of limited entertainment choices. There is a memorable view of the sprawling Annamite Theatre at Cho Lon, with its tower and turrets, which recall Shakespeare’s ‘Globe’. Its richly clothed actresses are separately featured. Then, as you can now see in top hotel lobbies, there are views of musicians in traditional garb playing iconic Vietnamese instruments. There is also a great shot of a children’s orchestra assembled in someone’s back yard. Eerily devoid of people and traffic, we are treated to a Lam Son square with green swards, park benches and trees between its Opera House and The Grand Hotel.
Moving on to ‘Transport’, the barges on the Saigon River look much the same. There are scenes of near empty streets with the first motorised vehicles and outside of the Ben Thanh market, where you now would be lucky to see the fast-disappearing cyclo, there is a line of hand-pulled rickshaws awaiting customers. Old postal buses, packet boats at dock, a passenger liner with French gentlemen in white suits and pith helmets out to greet arrivals, an old Air France poster and a view of Charnier Street (Le Loi) with 1950s French Renault and 2 CV cars, complete this section.
Finally, M. Chaplain includes some portraits of Vietnamese, their grace and charm showing in even the most mundane of activities. We can see women-from the high class to street vendor. They are enjoying a meal together, playing cards, celebrating Tet, out in the street, holding the baby and posing for the camera individually in their finery. We can see that the ‘ao yai’ and the ‘yem’, now only seen at special times or on schoolgirls, were standard wear in the past.
This hard paperback tome packs a lot into its 117 pages, with a little list at the back of place names now and their equivalents in the time of the French. Then, as now, it seems there was never a dull moment in Saigon and plenty of interesting subjects for the photographer to snap and show the folks back home. Here, then, is a book to remind us that ‘the past is a foreign country, they do things differently there’* True, but not so differently as these old postcards show us that fundamentally today’s Saigoners still have the same day-to-day tasks, challenges and pleasures in life as did their ancestors.