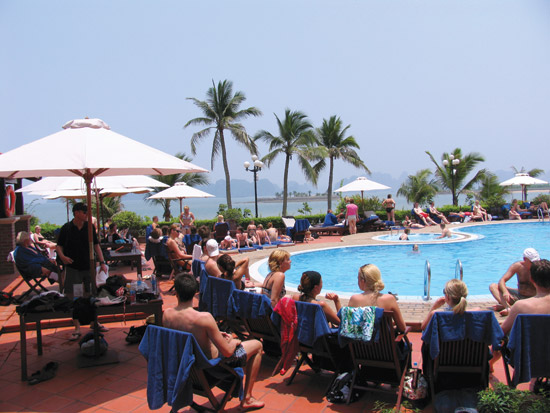 Tuan Chau the gem island A paradise for fun and relaxtion

The only dirt-and-schist island among 1,969 islands of the World Heritage Site of Ha Long Bay, Tuan Chau Gem Island, a bright pearl of Vietnam is and will always be the place that no tourist, foreign or domestic, wants to miss on any tour to explore Ha Long Bay.
The island boasts a theatre for sea animal shows with a level of sophistication that must be seen to be believed. Charming dolphins from South Australia, and mischievous seals and sea lions from the Gulf of Alaska come here to be trained by young, beautiful and talented Russian trainers to become well-trained circus performers in unique breathtaking shows.
There is a music stage, the most modern in South-East Asia, resembling a gigantic clam holding, sensational and splendid shows with lively soundtracks, synchronized with thousands of fountains, coloured lights, lasers, and tens of fire spitting pillars. It also had the honour of hosting the pageant Miss Vietnam 2004 and Miss Vietnam – A thousand years of Glamour – 2010.
There is also a busy modern harbour, crowded with luxurious yachts and cruisers, attracting many international investors. This tourist centre connects the World Natural Heritage of Ha Long Bay with the Worldâ€™s Biosphere Reserve of Cat Ba. It is also the best place to start Ha Long explorations. In the near future, the Cruiser Harbour of Ha Long Bay, the most modern and biggest in the region, will be completed at Tuan Chau, to push up the value of the brand name of Ha Long Bay â€“ Vietnam.