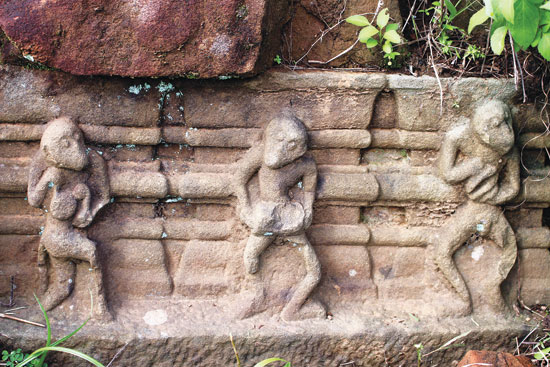 Temple of the naughty monkey

If one stays for a while at the towers to contemplate a thousand years of now peaceful, now turbulent weather and history covering the seemingly forgotten temples, one can enjoy the mysterious sandstone sculptures of the ancient Champa.
Among the multitude of reliefs on the walls of the Ch?m temples, many depict lively, mischievous and cute monkeys. A peculiarity is that all the monkeys’ sexual organs are vividly expressed.
Here, three monkeys carry baggage on their shoulders and heads. There, another tired three: one with its back bent down, hugging a gourd, a middle one picking up something, and a left one sitting on a rock, its chin resting on its hand. In another scene, three monkeys beat drums and cymbals and dance jubilantly, perhaps celebrating a victory.

The most remarkable scene, perhaps, is the funny one depicting a little monkey, its penis being bitten by a tortoise, while another monkey stands by their side, scratching its head with one hand, the other pointing at the tortoise.
In 2007, at the Kh??ng M? site, archeologists excavated 17 unique sandstone sculptures, among which some depict monkeys. These sandstones are now on display at the Champa Sculpture Museum of ?à N?ng.
Culturologists think that the monkey is the Ch?m totem. Among Ch?m architectural remains in Qu?ng Nam province, Kh??ng M? temples have the most images of monkeys; in many postures, expressing the most nuanced of feelings, all highly stylized.
Qu?ng Nam province has many other Ch?m spiritual sites, such as M? S?n complex, B?ng An tower, Chiên ?àn complex, An Phú vestige, and 26 other scattered Ch?m relic sites.
The sculptures at Kh??ng M?, according to Ch?m culture experts, seem to be related to the epic poem Ramayana, a story about the fight of prince Rama (an incarnation of Vishnu) and his army of monkeys against Lanka King Ravana to free his wife Sita.n