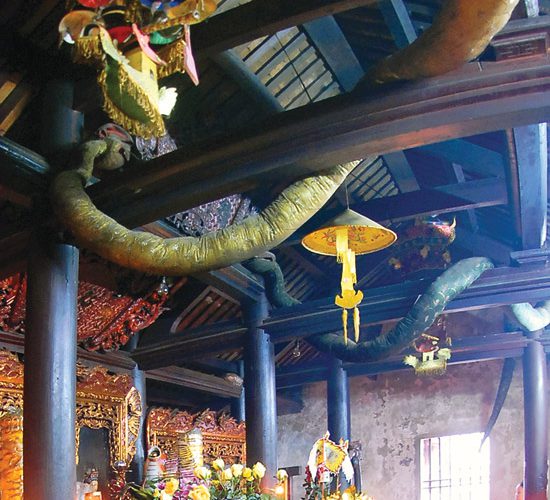 In Vietnamese Culture, each lunar year is represented by an animal. The year 2013 is the year of the snake. The snake is worshiped as a water deity throughout Vietnam, according to Tran Minh Huong*, who also says snake worship is an ancient Vietnamese belief, and that the snake is regarded as the Vietnamese totem animal.
Along with birds and crocodiles, snakes are worshiped the most by Vietnamese, according to Tran Ngoc Them in his book Discovering the Vietnamese Culture, Ho Chi Minh City Publishing House, 2001.
Vietnamese ancestors, according to Tran Ngoc Them, belong to the Tiên R?ng species. Tiên (fairy) is a symbol of birds, and R?ng, or dragon is a symbol of the snake and crocodile. In many instances, particularly in idioms and proverbs, the snake is associated with danger and evil things.
However, in Khmer pagodas in the Mekong Delta, snake sculptures are used to drive away ghosts.
Whether Vietnamese are fearful of or worship snakes, they eat them. Snake dishes are considered a specialty and snakes are getting rarer and rarer due to human consumption.
Snakes dishes are usually favoured by drinkers; many of them enjoy drinking a fresh gall, believing it’s good for their health. For this, many snakes are killed right on dining tables to get the gall, and sometimes blood, to mix with liquor.
Men also like to put snakes, particularly cobra, serpent verts and yellow banded kraits into rice liquor and leave it for months and years before they drink because they believe it’s good for health.
Snakes are bred and reared commercially in Vietnam, both for food and use in traditional medicine.

Catching snakes is an age-old craft. It’s said the craft of snake-catching dates back to nine centuries ago in Le Mat snake village on the outskirt of Hanoi. Now, the villagers rear snakes and run snake restaurants. Le Mat Village Festival honours the snake craft and features a snake dance on 23rd day of the third lunar month or 2 May, 2013.
Vinh Son Commune, Vinh Tuong District, Vinh Phuc Province near Hanoi is also another well-known snake village.
In Southern Vietnam, Dong Tam snake farm, 19/9 Le Thi Hong Gam St, My Tho, Tien Giang province, tel: (073) 3874359, about two hours by car from Saigon, is a popular stopover for visitors to the Mekong Delta. The farm rears snakes for eating, for their skins and for producing anti-venom from their venom.
*Snake image in worship and legends, Tran Minh Huong, Van Hoc Nghe Thuat Magazine, May & June, 2010.