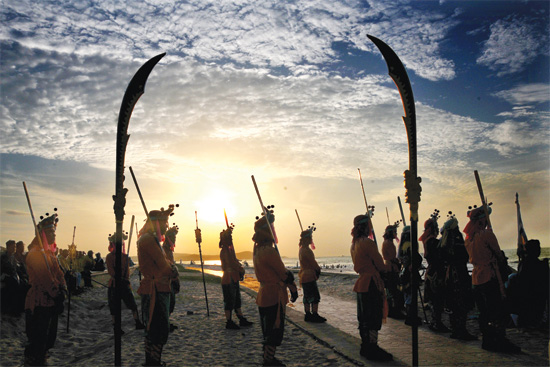 Praising the Lord of the Sea

Once, Avalokitesvara was sitting on a lotus that flew abovethe oceans and saw thousands of fishermen caught in a vicious storm. TheBodhisattva tore His frock into pieces and threw them down to the sea and readan incantation. Each piece became a whale and pushed the fishing junks ashore.

Since then, when a dead whale is washed ashore, peopleperform a sacred funeral ritual and build a temple to venerate it. From thenon, they gather every year on the same day to pay respect to the Fish Lord.

This is typical of the many legends associated with thecustom of whale worship of fishing communities in the mid and south of Vietnam,including Binh Thuan.

Many villages along this stretch of shore line have a templeto worship the Lord. To show their respect, fishermen call the whale “Lord”,“Fish Lord”, “South Sea God”, etc.

The custom of whale worshipping has been noted in over 300year old historical records. Over 200 years ago, the Nguyen kings knighted thewhale as “South Sea Great General.”

Culture experts say that the “Greeting the Lord” festival isthe most important one to the fishing communities of mid and south Vietnam.

As in many other places, to Binh Thuan people living by thesea, the Fish Lord is the most sacred deity. Each time before going out to sea,fishermen come to the village’s Fish Lord temple to pray to the Lord, askingfor protection and a big catch. Many believe that if the prayer is solemn andrespectful, the Lord will appear when and if they face any peril at sea.

Binh Thuan has the most Fish Lord temples. Along its 192 kmshore and on some islands of the province there are 26 palaces and temples ofthe Lord, most notably the Van Thuy Tu Palace at Ngu Ong Street, Duc Tang Ward,Phan Thiet.

Van Thuy Tu Palace, one of Binh Thuan’s oldest, and aNational Relic, was built in 1762. In its 500m2 area, it has a main edifice andtwo houses of worship, Tien Hien and Vo Ca, which contain many relics of sealiving and Chinese-Vietnamese cultural blending, expressed in statues, shrines,lacquered boards with words of wisdom, a big bell and 24 decrees of conferment,given by the Nguyen kings.

Van Thuy Tu, through the history of its existence, hasstored many 100-150-year-old whale skeletons. It currently keeps on display agiant 22m-long, very well-preserved skeleton, said to be the largest inVietnam.

Every year on the 20th of the sixth lunar month, the fishingcommunity of Phan Thiet shore has a Fish Lord festival, also called the “Prayfor Fish” festival. It lasts the whole day with solemn rituals and games.

The main ritual is the “Greeting the Lord” procession,starting from Hon Lao Island to Hon Cha estuary, then across Ca Ty River to VanThuy Tu Palace. Once the Lord is home, the community’s respected elders beginthe sacred ritual, praying to Him to bring peace to the country and the people,prosperity to the villages, safety and rich catches to fishing boats at sea.Then follow other rituals such as, “Setting free,” “Flying lights,” “Floatingboats,” etc.