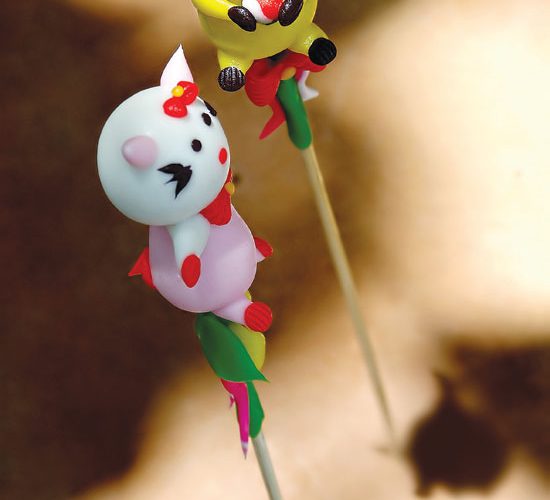 Pop culture on a stick

Artisan Nguyen Van Thanh, chairman of the trade association of Xuan La, has made a lot of contributions to the development of the Xuan La trade village, the only village of Vietnam with the tò he trade.
Born in Xuan La Village, Phuong Truc Commune, Phu Xuyen District, Hanoi, where traditionally everybody made tò he, Mr Thanh learnt to make basic figures from coloured starch when he was three. Seven-year-old Mr Thanh already made colourful animals for his parents to sell. He knows how to cook the starch to make the colour mix most glistening, to produce the most eye-catching tò he.
So, tò he followed him to his university’s auditoriums. With a tool box containing starch, a small knife, some bamboo sticks, some wax, a comb and a spongy box, Mr Thanh goes to make and sell tò he every Saturday. His magic fingers transform coloured starch into lively figurines, fascinating children and adults alike.

After graduation, Mr Thanh took a job in his home town and continued preserving his ancestral trade. A dynamic individual, he quickly found the tastes of different clienteles. Old people love the cakes he kneads, farmers ask him to make buffaloes, soil picks, ploughs, theatrical figures and national heroes such as the Trung Sisters, Lady Trieu, Le Loi and Quang Trung. Young people want roses, teddy bears, zodiac animals and cartoon characters such as Tom and Jerry, Superman and the Monkey King. And so he has been making tò he for the past 21 years of his life.
In 2009, Mr Thanh and other artisans like him established a cultural heritage association and traditional trade club of Xuan La Village with 54 members and him as the chairman. Now the membership includes 119 people.
On 27 October, 2011, Mr Thanh won one of the three highest prizes in tò he-making competition during the first festival of traditional trade villages of Phu Xuyen District. He made King Ly Thai To and Phoenix on a Lotus in only about 30 minutes.
In 2012, Mr Thanh launched tohexuanla.vn website to promote his own tò he figurines and Xuan La’s traditional trade to tourists near and far.
In 2014, he was invited by the Vietnam Centre of Culture and Arts of the Ministry of Culture to participate in cultural exchanges of the peoples of ASEAN in Thailand and China. His cute and lively tò he have become unique gifts, a typical symbol of the charming Vietnamese culture for the ASEAN delegations.
Mr Thanh is often invited to lecture, show and teach the art of tò he making in restaurants and schools.
He is also a regular presenter, showing how to make tò he in the Creative Corner program on TV.
Mr Thanh said, ‘Tò he kneading is very educational. It helps kids develop creativity, mind fluidity and links the abstract and the concrete.’ All children love the tò he, not only Vietnamese.
His deepest concern is that his members still can’t earn a living by the trade. Each of them only makes 2,5 – 3 millions a month and has to sell other toys too. Xuan La villagers only make tò he in festive occasions during Spring, and do other things for the rest of the year. Many families only do it for fun and for the sake of preservation of ancestral values.n