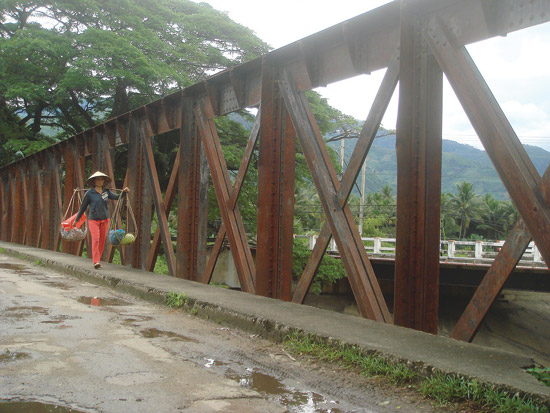 Criss-crossing the Central Highlands, ascending in the morning mist on the Song Pha mountain pass of the 27 highway to Langbian Plateau, hanging in the blue smoke while the sun is sinking on B’lao Pass Highway 20 to Dijring Plateau, gliding in dust clouds on highway 14 under the scorching sun of Dak Lak plateau…I have seen so many abandoned bridges.

Contemplating them, taking photos of them so many times, somehow the feeling yet remains pristine, one like meeting old friends and taking a photo as a way of greeting them. Some are abandoned because they were destroyed by war. Some are not needed because the road was rerouted. Some simply are degraded beyond repair. Some suddenly became unwanted because the country now can borrow money from abroad to construct new bridges, and has the need to do so.
In the early 20th century, the French focused on building roads and bridges to the Central Highlands. Those roads and bridges brought the ‘mythical land’ (as described by Dambo, one of the very first ‘Tay-Nguyenologists’ who came with the French to colonize this country), nearer to the modern world; mountains and forests became plantations, then offices, slash-and-burn civilization moved to industrial plantation, mountain villages became townships, implanting city civilization into or replacing forest civilization, injecting rationalism into the naiveté and incorporating market culture into the purely agricultural, emotion-driven way of life.
Every time I pass by those abandoned bridges on the Central Highlands, I can’t help but think about so many generations of miserable Vietnamese who were forced to work as coolies for the French in those painful periods. One can feel vividly the presence of bridge laborers, exiles in their own native land, toiling in the silhouette of the clouds floating above.
The French, with advanced science and talent designed those wonderful bridges. But it was the sweat and hands of the Vietnamese that built them, sacrifices that can be felt even now. Traces of villages of Vietnamese, who once drifted with the fate of road-and-bridge coolies, can still be seen at Song Pha, Dran, Phat Chi, Tram Hanh on highway 27, at B’lao Seré, Dai Lao, Nam Nhi on highway 20 and near bridge 14 across Serépôk River on highway 14 today. Among the graves of Vietnamese on the Central Highlands, there are those of road coolies, bridge coolies, and coolies of the coffee, rubber and fruit plantations, and those of traders. I used to wander on the hills inhabited only by-road-and-bridge builders’ graves.
Today, countless numbers of new bridges have appeared on Highways 20, 27, 14, 21, 19, 25 and 28. From the plains up to the Central Highlands, the abandoned bridges built 80-100 years ago are still strong and elegant, like works of art hanging over streams and rivers. Some, such as Da Quay bridge near Nam Nhi Farm on the old Highway 20, were built with ferro-cement in the form of a cozy house, as if not only for vehicles, but also for shelter. The Dai Lào Bridge arcs between heaven and earth like a rainbow. The wavy, weathered 14 bridge is an architectural work of art.
People no longer use some bridges that go from the Central Coast and from Ho Chi Minh City to the Highlands. But people don’t demolish them. May be they are built too strongly, are difficult to destroy, and occupy almost no land, so people spared them. They are remaining mementos, unlike those destroyed by the wars, or the ones made of iron, disassembled after the war to be sold as scrap material.
The local people living near those unwanted bridges use them for shelter in the storm season, to sun-dry agricultural produce. It’s where they sit to contemplate the river underneath, where kids learn to ride a bike, do their home work, where boys and girls date, where newlyweds take wedding photos, and especially, where French tourists come to feel bewildered by long-forgotten ghosts still lingering there.

Dai Lao bridge, National Road 20, Bao Loc City. It is no longer used since a new bridge has been built nearby