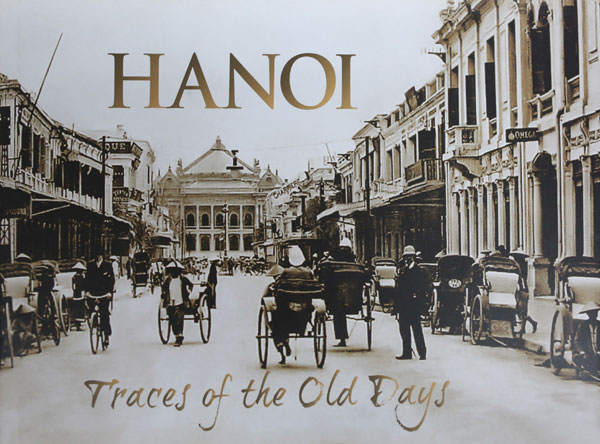 Hanoi-Trace of the old days

In our ‘Instagram age’ when every day, millions of photographs are instantly uploaded to websites and almost as quickly forgotten, it is a joy to pick up and leisurely thumb through an album of old black-and-white pictures. It is a particular joy when that album blows away the mists of time and shows you captured instants of the past life of a city you know and love. Although I have lived in Vietnam for twenty years, I cannot claim to know Hanoi well, having only visited it on a number of business trips that hardly reaches double figures. After an absence of ten years, I went back last year and was struck by the large numbers of skyscrapers that have sprung up. Yet, the old Hanoi with its thousand-year history is still there. I stayed near the Temple of Literature and walked the ancient streets shown in this book. For those with a love and nostalgia for past times and of that grand old dame named Hanoi, this is a tome to seek out.
There is more text here than you generally get in a book of this kind. Many of the photographs need to have their context explained and clarified. There is a very good introductory essay on the long history of Hanoi, among other things lamenting the fact that besides the great exception already mentioned of the Temple Of Literature, very little remained even at the time of these snaps that is more than two hundred years old. The credits at the back make it clear the English has been vetted by native speakers and they have done a good job making it read clearly throughout. I shall now proceed to give you a section by section overview of the book.

Markets
Street and municipal markets will always be the best place to experience the essence of a place — the character of the local people and the nature of their economy. All the more fascinating to see markets at moments frozen in time of a hundred years ago and more.

That young flower girl in the picture there probably grew old, become a mother and then a grandmother; perhaps even I have brushed shoulders with her descendants on a Hanoi street. It is interesting to learn that the nickname for Hanoi in the past was simply ‘The Market’. The sellers and buyers may be attired and look differently now, but it was the same bustling activity as in today’s Vietnamese markets. We see goods back then were carried to market on strange-looking wooden barrows and also balanced atop the seller’s head. As now there was a separate area for live chickens due to, as we are told, the foul smell. Also in this section, we see wooden boats moored alongside the Red River near the Dormer Bridge, vital for the inflow of agricultural produce and merchandise to the markets. There are also sellers using quaint old buses to get to market.

Partly due to a recent ‘renovation’, this is the area of Hanoi that best maintains its old character. Each of the thirty streets were occupied by craftsmen from various villages or some by the Chinese specialising in certain businesses such as gold, silver, dyeing, and silk. We see most of the houses were of earthen walls and bamboo roofs. Only the Chinese had houses of brick. The actual number of guilds was not a constant thirty-six but changed from time to time. This section provides many snapshots of Hanoi forbears tending their shops, producing goods and transporting them through the bustling narrow streets.

Hanoi Citadel
Sadly, the French levelled the Hanoi citadel in 1894. Only the flag tower, the North Gate and a few buildings inside the citadel remain today. Thus the photographs and drawings shown here are of enormous value. It seemed quite like the Hue Citadel, which of course, we can still see. There are the high walls, the gates, store house and dwellings of high officials, as well as shots of the Royal Palace and of the King himself amidst his entourage.

This section shows Hanoians of yesteryear at their everyday toil. Captured in 1884, a middle-aged woman sits weaving at a large wooden loom. We learn that people used to make their living fishing from the many Hanoi lakes. Rice husking kept many busy. Blacksmiths and turners turn out their wares. As today, people are making conical hats in their yards. There are oil pressers, parasol and umbrella makers, wood carvers, painters and decorators, embroiderers, people transporting goods by wooden wheel barrows and rickshaw carriers of people. Add to this scholars commissioned to write letter an calligraphic art, itinerant shoe menders and cobblers, makeshift tea shop owners, street barbers, street musicians and even those who worked as human chess pieces!

This is the largest of Hanoi’s lakes, so called as it lies west of the river. The French called it ‘Grand Lac’ As evidenced here by many pictures of old temples and palaces, this was a gentrified and royal area. However many commoners made their livings here fishing, cultivating lotus flowers on the waters and a snap of the ancient ‘Cau Giay’ (Paper Bridge) leads us on to the many paper-making villages that were once around the lake, taking their raw material from the waterside trees. We see the stages of paper making from the stripping of bark, pulping, ovens for the boiling of the mash, and softening by dumping in ponds. Coming from a paper-making town myself, I found this intriguing. Finally, there is a shot of the people of Buoi (Pomelo) Village, which held an important local market

The heart of Hanoi was and remains the Lake of the Restored Sword (Hoan Kiem).It is amazing to see the famous temple on the small island (Ngoc Son) used to be accessed by a bamboo plank bridge more suited, as is the quote by a Frenchman, ‘to a light-footed goat than the heavy steps of Europeans’. There were more pagodas around the lake. There is a picture of a large beautiful one, sadly razed by the French to make way for the post office. Hanoi’s first theatre near the lake ‘Les Varietes’ is also depicted, along with a long gone bandstand in a nearby square. Another sad loss, we learn was the magnificent ‘Cercle Nautique’, a lovely colonnaded building in the form of a pleasure boat that once stood at the water’s edge and served as a popular cafe.

The last section comes closer to our times. It is basically about what the French did to try to convert Hanoi into a Paris of the Orient. (‘What did the Romans ever do for us?’ is a famous anti-colonial comic cry from ‘Monty Python’’). Well, here we see with their knack for flair and elegance, that the French brought some very fine administrative buildings, hotels and cafes, libraries, pharmacies and theatre, not to mention a power plant, improved water treatment facilities and the railway. The streets with horses, rickshaw pullers and early motor cars look very quiet compared to today’s hectic rush.
All in all, for those interested in seeing how Hanoi looked and how its people lived in the early era of photography, this book is very good value for money. If you live in Hanoi or on your next visit, you will walk her streets with different eyes and you may even imagine you see one of two of those ghostly personages you glimpsed in the book.