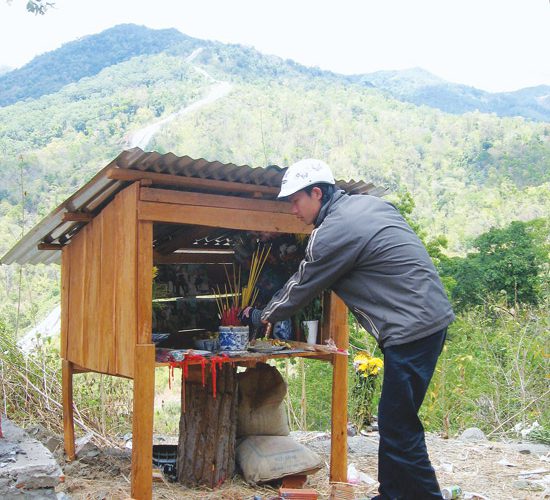 Ghostly checkpoints on the national highway

Around 30-35 people are killed in road accidents in Vietnam every day, according to a report by the National Traffic Safety Committee.
A shrine, or house for the spirits, is put up by the roadside where a person has been killed in an accident.
In recent years, the press has been clamoring about the so-called ‘shrine syndrome’. ‘There are up to 15 shrines in a three km stretch of Quang Trung Street in Ho Chi Minh City’s Go Vap District,’ Ho Chi Minh City-based Phap Luat (Law) newspaper reported on the 12th of October, 2004.
I’ve been travelling a lot by motorcycle for more than 10 years and I estimate that there is an average of one shrine every few kilometres on a national road. Most of the shrines are made of wood or bricks and concrete and are about 40cm in width, 40cm in depth and 50cm in height. There are even more shrines along the roads in the central and southern provinces than in the northern provinces.
Folk culture scholar Pham Hoang Quan said, ‘In the past, people mainly travelled by boat and there were few accidents, so there were not many shrines for the worship of the spirit of the dead people, and the shrines were on the banks of rivers and canals. Since the development of roads and the appearance of fast vehicles, a lot of shrines have appeared by the roads.’
Le Minh Chien, 45, who has been a driver for 20 years in Saigon, said, ‘People killed in road accidents usually have their bellies cut open or their heads or their bodies crushed, leaving the [surviving] drivers terribly distressed, so the drivers build shrines to convince the spirits of the dead people to forgive them.’
Tran Van Luc in Quang Ngai Province explained why he had built a shrine for his younger brother Tran Van Hoc. Luc said, ‘Last year, my younger brother rode a motorcycle while drunk, and crashed into a bridge handrail and died instantly. Our family pitied him and asked a sorcerer to bring his spirit home but the sorcerer said the spirit of my brother did not want to come home, so we built a shrine as shelter for him.’
Nguyen Van Dieu, who lives near a shrine by the National Road 1A in Quang Ngai Province said, 17 years ago, I heard a terrible crashing sound at cockcrow while I was still sleeping. I got up, opened the door and saw a man in a pool of blood with his belly cut open. After the police carried his corpse away, the locals in my neighborhood pitied him and raised some money to build a shrine for his spirit to take shelter.’
Long-distance drivers said the National Road 1A has more ghosts than any other roads because ‘this road has the largest flow of traffic; there are a lot of treacherous bends and passes, causing the biggest number of accidents,’ said Nguyen Ngoc Huong – a driver of the Danang-Hanoi route.
Le Minh Chien who has been a long-distance driver for 27 years said, ‘About 10 years ago, there were nearly 100 shrines at Hai Van Pass. There were so many shrines because there was not an underground tunnel going through the pass, and all the vehicles had to go along the busy pass with may sharp bends, causing many accidents.

‘Hearing about many deaths from accidents and seeing many shrines with incense sending out a lot of smoke all the time really scared many drivers, who then had more accidents.’
I still see smoke coming from about 40 shrines when I go along this pass, which is the most dangerous pass in Vietnam.
The authorities in some localities say that the shrines by the roads badly affect the beauty of the public places and partly block the drivers’ vision, so they clear out the shrines. However, cultural expert Nguyen Tien Van said the shrines should be left where they are. ‘Because such large numbers of shrines can feed the psyche of the drivers, they are more responsible when driving. Also, the shrines are like warning signs saying they the roads are dangerous and people should be careful.’
Several drivers say that each shrine is connected with a spirit story which is hard to understand or scary. ‘People would not build shrines if they didn’t believe in ghosts or spirits. Wherever there is a shrine, we drivers believe it is a sacred place because our ancestors said worshipping means there is something sacred. Some shrines are so sacred that it is scary even when we just hear about it because people are very often killed in accidents there. Such sacred shrines are usually shelter for young or virgin ghosts who like to ‘cause’ other people to die to make friends with them,’ driver Nguyen Hung Cuong said.
Driver Le Kim Tu said the most sacred among the shrines along the National Road 1A is Hong Hai Nhi Shrine in Binh Thuan Province. He said, ‘In 1993, a woman with a five-year-old kid went around as a beggar. One night, they slept on a rock by the road. The next day, the boy got up early and ran out and was run over by a vehicle. The mother could not afford to bring the body of the boy home, so she put him in an opening in the rock by the road.
‘After that, several drivers were killed or got injured in accidents where the boy had died. The survivors said they saw a boy in wet blood running in front of their cars, so they braked quickly or were scared out of their wits, and their cars went out of control and overturned. Some drivers got terrified and raised some money to build a shrine for the dead boy and called it “H?ng Hài Nhi (very young kid)”.’
‘Now any driver going past that place puts out their cigarettes if they are smoking, puts on their shirt if they are not wearing one, or keeps quiet if they are arguing with assistant drivers. Generally, drivers must be courteous to the dead kid,’ Tu added.