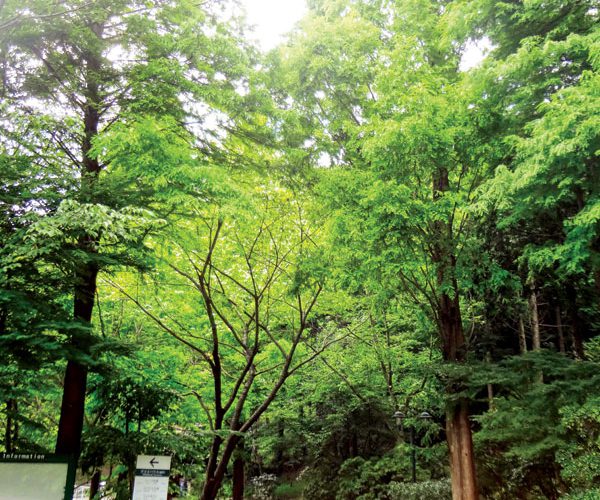 Falling in love with Japan

A mini zoo at the Mitsui Shopping Park. Photo: Nifrel

My friends were jealous of my luck when I got the chance to put my footprint on Japan, one of the most beautiful countries in the world. I had a six-day trip to Japan at the invitation of Kinki Tourism Ministry/Kansai International Airport/Tobu Group to Vietnam Heritage. Beginning when the plane landed at the airport and I got my immigration stamp, I began to fall in love with Japan, and my love only grew as I admired the breathtaking city view from the mountains, went to majestic castles with large, beautiful gardens, worshipped in the sacred ancient temples, took the long and winding road climbing to the mountains, enjoyed Japanese specialties in hundred-year-old houses and walked on pavements decorated with blossom trees.
I came into Kansai International Airport in Osaka Bay, â€˜One of 25 of mankindâ€™s greatest engineering achievements,â€™ according to CNN. A 70-year-old official instructed me how to fill in the customs form. He was very gentle and kind. I wonder why he still worked at that age. I saw old workers everywhere. A Japanese friend told me that in Japan many old people want to do a job after retiring. I think that labour not only helps the old earn a living, but also make them feel useful. Maybe that is the reason why most Japanese have longevity. According to research by the United Nations, in 2015, Japan had the highest proportion of working seniors among developed countries including US, Canada, UK, Germany, Italy and France.
I admired mouth-watering, hand-made plastic food displayed in the glass windows of all restaurants. They looked so real in both detail and colour. They were invented by Japanese nearly a hundred years ago. The food models are used as a menu with a small sign, ingredients and price of a dish in English and Japanese. It is convenient for foreigners to know what they are getting eat before they order.
There was a variety of tourist information in English at the airport or you can ask the staff at the information desk at the airport. It will be their pleasure to instruct you where, when and how for your trip in a short or long stay. I took a 131-page tourist book for travelling in the Kansai regions and I wished I could go to every place from the first page to the last page. My advice is you should not spend time on many places instead of focusing on some in a day. Because in every place you will learn a lot of information about history and tradition; template the landscape and taking photos. You should buy â€˜One Pass Ticketâ€™ at $30 to use at train stations. The network of train stations are built densely through the country.
Kansai regions, South-Central Japan, include Osaka, Kyoto, Kobe, Fukui, Shiga, Mie, Nara, Wakayama, Tokushima and Tottori. Among them, Osaka, Kyoto and Kobe are crowded with tourists. It was August and Japan welcomed me with the sunâ€™s hot rays of summer. Each season in Japan has its own attractions and is no exception for the summer which is perfect for outdoor activities, festivals and sparkling firework performances on the night sky.

Osaka â€“ Mitsui Shopping Park
The smooth highway road, with a backdrop of calm, blue sea and endless mountains spanning the airport and the main land, is so idyllic. I visited a famous destination in Osaka â€“ Mitsui Shopping Park which had over 200 of the stores and restaurants. The mall was an interesting place with many famed local and foreign brands. Most of stores and restaurants in Japan open after 11 a.m. and close around 8 p.m. It is a full-day trip for families to go shopping, play, learn and discover.
Nifrel, located in the entertainment area of Mitsui Shopping Park, is considered a living museum featuring an aquarium and zoo. Under innumerable lights and surrounded by glass, the hall looks like an endless space in the ocean. Colourful sea creatures swam peacefully. Every species had its own territory in a small glass pond. After taking a walk in the ocean, I entered the jungle. Everyone said â€˜Ohhâ€™ and â€˜Ahhâ€™ when a big majestic white tiger grabbed his toy. Opposite the tiger was a crocodile using his tiny eyes to observe tourists as though we were the ones in the zoo. Tourists are advised not to feed or birds or squirrels. Besides this, the tourists are not allowed to use cameras with flash, so as to protect the animals from discomfort. Two penguins kissed and cuddled, ignoring other touristsâ€™ looks. Next, I went into a room with dim light. It was a light installation art bringing a mysterious world with various scenes from nature and the galaxy. The children took a shower of lights with joy.
How to get there: 2 minutes walk from Osaka Monorail Banpaku-kinenkouen Station

Abeno Harukas
Next, I came to the tallest skyscraper in Japan, â€˜Abeno Harukasâ€™ with a height of 300m, including a commercial centre, a museum, a hotel, an observatory from the 58th to 60th floor and a subway station in the basement. From there, I had a birdâ€™s-eye view of Osaka. It was so amazing. I feasted my eyes on the sea of buildings stretching to the mountains in the horizon. I felt like an infant who was able to stand up for the first time after a period of crawling. With the combination of â€˜earthquake- resistant technologyâ€™ and â€˜vibration control technologyâ€™, Abeno Harukas was secure against earthquakes measuring up to 7 in seismic intensity. In addition, Abeno Harukas is designed in a harmonious relationship between the earth and â€˜citiesâ€™. The building is supplied with power generated from the buildingâ€™s kitchen waste. This system creates heat and electricity by converting the waste into methane gas. Open spaces incorporate throughout the entire building to create channels for natural sunlight and fresh air to travel the interior.
How to get there: 5 minutes walk from JR Tennouji Station

Crab dishes
Osaka is the third largest city, so it is easy to be lost in the crowded streets with two rows of restaurants, hotels and shops. Joining the crowd I found my way to Kami Doraku, a famous crab restaurant in Osaka. It was not difficult to recognize the restaurant with a huge crab hanging in the front of it. The restaurant served a range of crab traditional multi-course lunches and dinners. My belly was fulfilled with a feast of crab, including boiled crab, steamed egg custard with crab, gratin crab, deep fried crab, crab sushi, soup and fruit. They are so fresh, cool and delicious. The prices ranged from $52 for a set menu dinner. Crab, unagi (eels), fugu (bufferfish) and Kobe beef are luxury dishes in Japan.

After a long day I had a good night at Hotel Okura Kobe overlooking Kobe Port. My room offered a picturesque view of calm sea, Kobe Port Tower, a big wheel and the city brightened by millions of colorful lights. Next early morning I could not take my eyes in the window. The city looked like a pretty woman sleeping in peace. A new day with many interesting things in Kobe were waiting for me to discover.

Kobe Shushinkan Breweries
It is such an interesting experience to taste sake at the popular Kobe Shushinkan Breweries, established in 1751, in the Nada region of Kobe. Japanese crafted this legendary liquor 2,000 years ago. A 10-minute documentary film is shown to explain to tourists how to make its premium sake called Fukuju. Locally grown rice, naturally pure water from mountain streams and cold winds blowing down from the mountains create the perfect condition for the fermentation process and handcrafting techniques help create amazing flavour. At breweries, you usually see a sugitama, a ball made of cedar leaves. A fresh green sugitama is hung on the doorsteps of the breweries to notify people that a new batch of sake has been made. On the back label of sake, there are numbers with and â€“ sign showing the amount of sugar in the sake. A negative number means itâ€™s sweet, and positive number means itâ€™s dry. Chilled liquor touched my tongue and went through my throat with a little bitter, which made my mind refreshed on a hot afternoon.
How to get there: 10 minutes walk from Hanshin Ishiyagawa Station

Kobe Beef
Kobe City is the namesake of beef which is the finest in the world. It is said that cows drink beer, are massaged with rice wine and listen to classical music to get the quality meat and give the meat a marbled appearance. Is that true? I do not know. However, one thing absolutely right is the meat very fresh, tender and juicy. It was â€˜melt-in-my-mouthâ€™ as soon as the first bite. The secret involves its origin. Tajima-gyu is regarded as the pinnacle of even the Japanese Black domestic breeds of Wagyu cattle, of which only a few now exist. No cow comes into this world and begins its life as Kobe beef. Even among Tajima-gyu cows, only the chosen few that satisfy specific quality criteria deserve the title â€˜Kobe Beefâ€™. So, the price is so expensive around $1,000 for a kilogram.

Kobe Nunobiki Herb Gardens
A cable car brought me to Kobe Nunobiki Herb Gardens, which is located on a mountain with the height of 397m. I feasted my eyes on a lush of trees, white water from a waterfall, a green dam and a splendid city view. The air was fragrant with natural aromas. The flowers boasted colourful beauty in the rays of the sun. The trees were full of fruits. The gardens were so clean and tidy; herb garden, rose garden, fragrant garden, lavender garden, four- season garden, oriental garden, lily garden and fruit garden. Some tourists relaxed their feet in the herbal footbath while enjoying the outstanding landscape. I walked along lovely curving paths to go down the mountain. Taking a break on the bench and looking to an open space of sky, mountains and the city by the sea make me feel freedom. The closer with nature the more you earlier get balance in life. I wonder why Japan usually suffers the anger of Mother Nature every year .Time seemingly can heal every wound but Japan recovers quickly in surprising of the world. It is a strong country of samurai warriors.
How to get there: 5 minutes walk from Kobe Municipal Railway Shin-kobe Station