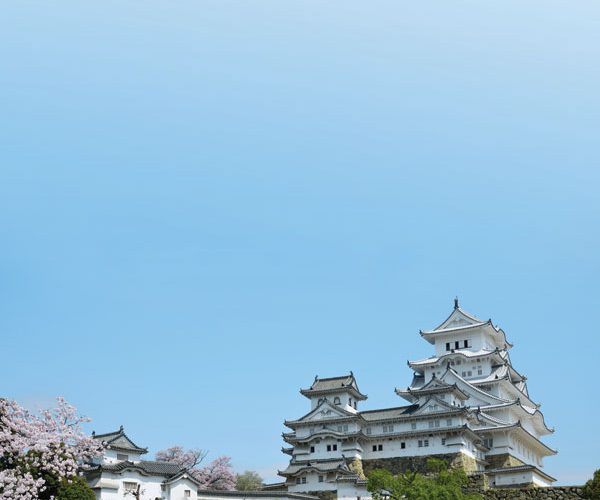 Flat concrete roads took me through tunnels penetrating hills, vast rice fields, Japanese houses scattered below the mountains, peaceful towns and clear streams flowing by green moss and shiny rocks. Leaving behind the crowds, modern landmarks and splendid landscapes of Osaka and Kobe, I headed for rural areas in Kansai regions. Huge modern constructions always gain the admiration of many people at first, but lovely little things or ancient things always linger on your mind for a long time.

Himeji Castle completely deserves to be recognized as a World Cultural Heritage Site and National Treasure of Japan. A huge majestic wooden castle, resplendent in its pure whiteness, looked like a bird swinging on the sky. It is so impressive in every detail from the clean long moat, wooden drawbridge, the gates, the tiles decorated with fish which are believed to protect it from fires, the curving fan of stone walls, the long white-plaster walls, the trimmed garden and more than 1,000 sakura trees.
To encounter the Main Keep, I had to penetrate 21 gates, some with traps. The gates are low and dark with the aim of hitting the careless heads of enemies. Besides, the owner is very smart to use the conflict of the dark and light, and the visual impacts to lead the enemies to go out of the castle. 997 murder holes are equipped to defend the castle. However, no enemies have conquered this castle yet.
Externally, the Main Keep appears to have five floors. However, it actually has a 7-floor configuration, including six internal floors and a basement. Visitors are instructed to see hidden windows and doorways allowing escape, warrior hiding places, weapon racks and platforms installed for monitoring and firing on attackers.
Certainly anyone also needs to lean on gods to find the strength, brave warriors included. There is a small shrine at the top. On the walls, you can see the six-petal nail covers used for decoration and covering nail heads. Observing carefully, you can see small wooden plugs with a variety of shapes on the beams. These proved that the owner is not only a good soldier, but also an artist. Looking at the miniature backbone of the Main Keep, I admired their talent. The tall pillars and stone walls at the base are one of the secrets to protect the castle from earthquakes. After 45 years of restoration, the more than 400-year-old castle still keeps its original shape and beauty through the time.

Next I came to the Somen Museum for lunch. A big tent was raised in front of the museum and served a summer dish â€“ somen noodles. Bundles of noodles are dropped into cold flowing water. Everyone then tries to catch the noodles as they flow by. It was a fun way to enjoy â€˜Nagashi Somenâ€™ with chopsticks. Somen noodles are served simply with sauce, ginger, wasabi, green onion and many kinds of tempura. Very cool and delicious, the noodles are firm. If you canâ€™t eat somen noodles in summer, you can buy some in the shops and enjoy at home.
Somen was created in the 1880â€™s in Japan and is manufactured in a limited period from October to the following April, because the process of making Somen depends mostly on the weather. The Somenâ€™s secret is the process of ripening and stretching, which is repeated several times. At the demonstration corner in the museum, an old worker showed me how to thin and elongate the noodles from 6mm to 1.3mm in diameter and from 50cm to 1.4m in length. The 2nd floor introduces the history and culture of Somen with figures, panels and audio visual material.

As the sun went down behind the mountains, my coach went to the hotel Onishiya Sushoen in Kinosaki Onsen Town, which near the Sea of Japan. Onsen in Japanese means â€˜hot springâ€™. Volcanoes bring to Japan a valuable resource, the hot spring, which is believed can soothe tense and tired muscles. There are plenty of hot springs scattered through the country. Most of them are concentrated in the countryside. So it is not difficult to find an onsen where you can soak your body in warm water and enjoy breath-taking landscape.
Onishiya Sushoen features a traditional Japanese hotel with a tranquillity garden ornament at the lobby decorated with trimmed trees, rocks, sand, water and colourful koi fish. The garden can be viewed from most of the rooms which are furnished with tatami mats, Shoji sliding doors and futon for a Japanese accommodation style.
The hotel treated me with a Japanese Kaiseki dinner which satisfied my senses of sight, smell and taste. Japanese cuisine has such a refined quality that it is recognized as an art form. The dishes are served on trays in small portions and great care in decoration. The cook seems to calculate the value of nutrition carefully in a meal, including seafood, meat, vegetables, soup, rice and fruits. Spices are not used very much, so as to make diners feel the freshness of ingredients completely.
Wearing yakuta, a kind of kimono, I went to the onsen in the hotel to experience bathing with naked people. I was really shy. But, I thought, it would be such a pity if I did not dare to try something new when travelling in a foreign country. After taking off their clothes, everyone looked the same anyway. Then the only thing to do was soak my body in warm water and let it heal my muscles and mind.

In Japan, every season has its own attraction. Spring, from March to May, has sakura (cherries) flowers blossoming from South to North. Summer, from April to August, has the lush of trees. Autumn, from September to November, has momiji (maple leaves) turning from green to red and yellow from North to South. Winter, from December to February, has snow.

Motoise Kono Shrine, Miyazu City, Shira
I could feel an invisible power as soon as I got to the Torii Gate, a typical symbol seen at the shrines, at the Motoise Kono Shrine where the god of the sun was enshrined. It is believed that when you go through the Torii Gate, you step into a holy place of the gods. Shintoism and Buddhism are two main religions in Japan. There are more than 80,000 shrines in this country, most of them attached to a story of gods and featuring their original unique architecture. Motoise Kono Shrine is a wooden ancient shrine built in the style of Japanese traditional Shinto architecture. The shrine is decorated very elegantly and located in a large area covering with old trees. You have to go to its garden to listen the natural music from bamboo connected to the ground. The beautiful sound is produced from water dropping into an underground cave. This place is very tranquil.
From this shrine, you can take a ropeway to Kasamatsu Park to enjoy a gorgeous mountain and sea view from the air.

I walked to Kamogawa, a famous river in Kyoto, to visit Fushimi Inari Shrine, which has over 10,000 red Torii gates offered by entrepreneurs, arranged in rows stretching over a 4km road leading to the shrine. Worshiping at Fushimi Inari Shrine is said to bring prosperity in business and bountiful harvests.
The ancient city of Kyoto, steeped in over a thousand years of history, lies in a valley surrounded by mountains. The tourist mecca is famous for a majority of ancient historical relics and beautiful natural scenes during four seasons. Kyoto comprises 2,000 ancient shrines and pagodas.
Kyoto will bring you back to Japan in the 19th century with ancient wooden Japanese restaurants, stone lanterns, bamboo sliding doors, umbrellas, kimono, wooden clogs and performances by geishas.
Going through poetic streets, I found the way to Fukujuen, a tea shop in Kyoto, which is located in an alley covered with high lush trees in the front and a row of cherry trees along the channel behind. It is a nice place to enjoy matcha which is a trendy drink recently loved all over the world. Matcha is premium green tea powder from Japan used for drinking as tea or in recipes. Matcha has been used in the traditional Japanese tea ceremony for hundreds of years. Nutritionists said that matcha is a â€˜super foodâ€™. It has 137 times more antioxidants than regularly-brewed green tea. One cup of matcha is equivalent to 10 cups of regularly brewed green tea in terms of nutritional content.
Sipping my matcha made by a Japanese instructor, it tasted bitter on my tongue, but after that, only the light sweetness lingered in my mouth. Matcha is usually served in a beautiful ceramic bowl decorated with seasonal flowers in Japan. Flowers are drawn outside and inside the bowl with the aim of letting the drinker enjoy the flower blossoms while drinking tea. Matcha and Mochi, a Japanese cake, is a perfect couple. However, Matcha also blends with other ingredients in perfect harmony.
In Kyoto, there are plenty of Japanese ancient houses used as restaurants, with impressive large garden ornament and geisha performances. The garden changes its appearance during each of the four seasons. In summer, a balcony floor built right above the Kamogawa River provides a perfect dining space for authentic Japanese dishes, as the breeze from the river adds to the elegance. It is a memorable afternoon at the restaurant Ganko Takasegawa Nijoen, with good food, the sunset and mallards bathing on the river.
Time went so fast and I had to go home with nice, unforgettable memories of Japan, a developed country careful not to ruin the beauty of nature and its unique traditional culture. Although expenses are high in Japan, many people are ready to spend money on high quality products â€˜made in Japanâ€™, because they get what they pay for. Japan gives you purity, fresh air and poetic sceneries in every nook and cranny. A pebble in a spring, a tree in the street, a flower, a lake, a forest, a mountain, a house, a shrine, a castle, a building â€¦ all of them have a soul that makes Japan become really unique. It is a place where you come once, then return home with a remembrance and after that come back again. Come to Japan to find  balance in the modern bustling life.