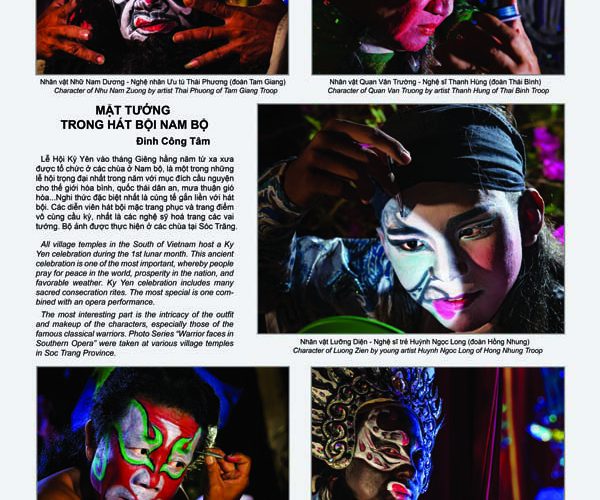 Photo series were exhibited at
the vietnam heritage photo awards 2018

The Centuries-old Ky Yen Festival, a national intangible cultural heritage, is one of the most important folk religious ceremonies at Southern village temples. It usually takes place in the early months of a lunar year.
The book “Gia Dinh City Records”, published during the 1802 – 1820 years, described Ky Yen Festival thus: “Each village (in the South) has a temple. Only God-favored days should be chosen for village events”. On such a day, old and young must gather at the temple in the evening and stay there overnight. This is called the audience. On the second day, scholars in ceremonial dresses beat drums and gongs and conduct the main rituals. On the third day, the closing ceremony, called “Great Unification”, is conducted.
Ky Yen Festival in Southern villages usually lasts for three days. It includes a dozen rituals: Inviting Ancestors, Inviting the Deities, Receiving the Deities and Praying for Peace, Life Offering (sacrificing a live pig), Audience (village elders presenting themselves to the deities), Life Cycle (presenting the creation and development of the universe), Main Rite, Worship the Village Founders, and Seeing the Deities Off.
Among these rituals, the Life Cycle is the most attractive to locals and visitors alike because it is an opera presentation offered to the Gods.
The art of opera appeared in Vietnam over a millennium ago. It is a precious gem among the performance arts of the country.
The opera programs devoted to the deities at village temples are always both solemn and jubilant. Young and old, ladies and men, locals and tourists, everybody is excited at the opera show. A special feature of opera is that the performer’s face is meticulously painted according to strict conventional rules. Pale faces belong tos foxy sycophants and ghosts. Extraordinarily strong or lustful people have red faces…
Among the opera’s conventional faces, those of mandarins are the most intricately painted and distinguished. There are two typical kinds of mandarins;: the scholarly civil ones and the military ones.
Military faces are normally blazing red, with slanting eye brows and eyes, expressing strength, loyalty and staunchness…
Civil mandarins on the other hand usually have pink faces, where the eyes, eye brows and mouth etc. are quite well proportioned. These features show a mild and considerate character, in contrast to the ruthlessness and bluntness of the warlords.