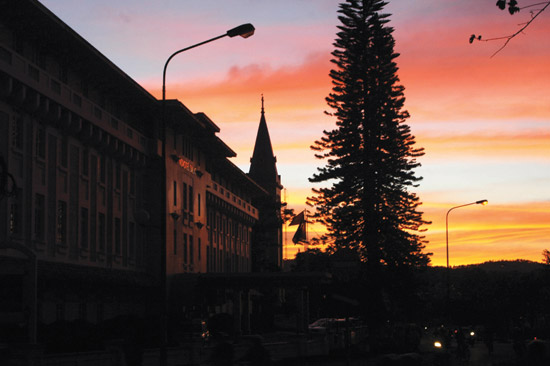 Hidden in the very deep of pine forests, Dalat is an enigma that puts a lasting spell on everyone paying it a visit. The perfume of mystery is almost palpable in the Dalat air. It makes those who felt it at their first visit to come here again and again. The very special atmosphere of the city that, no doubt, is partly created by high mountain air that makes new-comers tipsy and overexcited, but is also richly flavoured by intrigues and secrets of the close past, when French colonial elite was living its passion here.

Some abandoned villas at the beginning of Hung Vuong Street are also said to shelter unusual inhabitants. Or maybe it is just a mountain wind disturbing old wooden floors or the voices of the past that donâ€™t want to leave the city.
Those visitors who like to find the authentic features of truly Vietnamese culture in Dalat that do exist in fact and live happily with General European look of the city should visit Tau (Chinese) Pagoda on Khe Sanh Street, where a small, self-revolving wooden table of uncertain provenance found its home. It revolves independently according to visitorâ€™s orders, without them even touching it. The most amazing about this is that it understands all languages.
Its â€˜younger brotherâ€™, another magic table (yes, there are two) can be found in the small house, next to Tau Pagoda on the left. The owner of the second magic table says her father brought it from Qui Nhon, where he had bought it from Chinese merchants at the beginning of the last century. The owner is sure that the table brings luck to the family and she is very grateful to this unusual family member made of wood for providing her a constant income from tourists coming to see the local small miracle.
The living history in Dalat seems to look through the windows of old villas, to pass just behind your back, touching you lightly with the hands in velvet gloves. The spirit of the close past here sometimes is so dense that one can catch a perfume of old candles, the smoke of pinewoods from some old fireplace, a sweet perfume of Chanel, and hear a distant sound of gramophone playing tango, or the klaxon of some old Peugeot.
The recent past that hasnâ€™t yet had enough time to leave Dalat; it has just stopped, deep in its thoughts, to observe its lands for the last time before quitting. Walk along old French villas on Tran Hung Dao and Hung Vuong streets at dusk, and youâ€™ll feel how the past, coming together with dense night fog, fills the air with mystery.
*Nathalie Sokolovskaya is a Russian writer who has been living in Dalat for years.