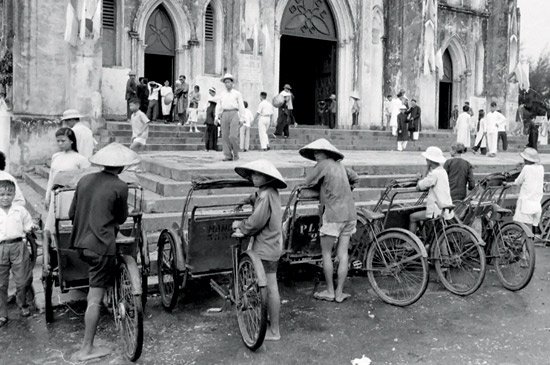 Cyclos in front of the Cathedral, Hanoi, 1954
Photo from the archive of Nguyen Ba Ngoc

From symbol of the bourgeois to war machine to tourist
attraction, the cyclo rolls on

The patent for the pedicab, which first appeared in Marseille, France, was registered in the 1930’s. Its first recorded appearance in French Indochinese colonies in the Far East was in 1936, when two men took turns to drive a cyclo in a marathon from Phnom Penh to Saigon in order to prove the superiority of the vehicle.
Before that, there were rickshaws, introduced in the late 19th century from Hong Kong to Hanoi by a French ambassador. The image of a sweating coolie, bent over to pull a rickshaw with a master or a passenger on it was described by the famous Nguyen Cong Hoan as a ‘man-horse’ or ‘horse-man’. It made one feel uneasy, as social awareness and democratic spirit was being elevated. Shortly after the liberation of Hanoi (1954), they were eliminated as a symbol of the ‘man-exploiting-man’ way of life that the new regime wanted to eliminate. Only then came the stardom of the cyclo.
Before the August 1945 revolution, there were only a few cyclos. During the Occupation (1947-1954), because the war increased the city’s population, Hanoi’s few tram routes multiplied. Taxis and private cars were still rare; bicycles were the main means of getting around.
Our cyclos are nicer than their counterparts in neighbouring countries. There, the cyclist is seated in the front, and the passenger’s view is blocked by his back. Cyclos in some other places have the cyclist seated at one side like the motored three-wheelers, but even then a side view is blocked.
The cyclos used in Hanoi seem more elegant because the passenger is seated in the front, the cyclist at the back, so we don’t see the fatigue of another person and can enjoy a complete view. If the cyclist happens to be good-natured and loves to tell tales about people and places in town, the ride can be wonderful.

Cyclo in Saigon, 1961. Photos from the archive of collector Philippe Chaplain

Fabulous writer Nguyen Tuan, back from visiting Saigon after the country’s reunification, remarked that the cyclos there looked smarter, with shining frames and spotless white seats, but the seat is too narrow in the back and is very uncomfortable for couples. He also said that the motored cyclos in the South carried heavy loads and run like tanks. Hanoi folks can’t stand them. Cyclos are the most civilized, polite and convenient vehicles. Cars are closed and too fast, you can’t see a thing, he said. He said he dreamt of seeing the leisurely cyclos coming back to Hanoi streets along with peace in the country.
He had to dream it because the cyclo’s fate is uncertain. As a means of public transport, during the socialist reforms, they had to become public property. Moreover, the changed social attitude made the passengers feel uncomfortable sitting while another person worked and sweat. It felt like exploitation, although well-paid exploitation.
So the cylcos soon became mostly cargo carriers. They were redesigned to be sturdier, with less comfort, the cushion replaced by a wooden bar, the arms widened to support bulkier things and two hooks added to the footrest to facilitate pulling uphill.
The cyclo got its fame during the American bombing of the North Vietnam. It became an efficient aid for production and battle. It carried goods where motored vehicles couldn’t go. It evacuated people. It carried the wounded to hospitals. It carried arms and ammunition to battle fields. It even carried American airplane wreckage along the streets to boost the spirit. The cyclo has its place in the museum of wartime Hanoi.
Then came the Doi Moi. Many notions changed. Life’s demands became more and more diverse. Foreign tourists now come in waves. Our folks have more means to play with antiques-cyclos included. They are renovated, shined to be used for betrothal ceremonies. A betrothal procession on cars looks rich, but spiritless, while playful young boys and girls, carrying colourful trays and boxes of offerings and fruits, together with serious seniors, on open cyclos, in bright day light, merrily and orderly moving along the streets… Nothing can be sweeter than that.
The image of those processions immediately caught the eyes of the tourists, and the cyclos became an iconic means of transport of Hanoi, just like the horse-drawn carriages around Xuan Huong Lake in Dalat, or the brightly red double-decker busses of London. In recent years, long processions of cyclos wandering in the streets of Hanoi, mostly around the old quarter, became a familiar and cheerful sight.
Hanoi streets are not only tighter than those of London, but also much more crowded than those of Dalat. That’s a headache which has many times made the city’s authorities want to ban the cyclos to ensure smoother traffic. There was once even a plan to eliminate them completely. Many have expressed regret if that will really happen one day.
It reminded me of Nguyen Tuan’s story again, and his conversation with a Saigon cyclist. He asked, ‘In the war time were you afraid of the Americans?’ ‘No, they don’t pay, I kick their butt.’ ‘Afraid of hunger?’ ‘No! Hard to get rich, but if you are not lazy, it’s not hard to get by.’ ‘Then what are you afraid of the most?’ ‘Change of street names! Loss of orientation!’ he said.
Not only the cyclists, but everybody is afraid of the ‘loss of orientation’. But that’s exactly why we still have a glimpse of hope that the days of the cyclos are not over.

Cyclos in Hanoi, 1954. Photo from the archive of Nguyen Ba Ngoc