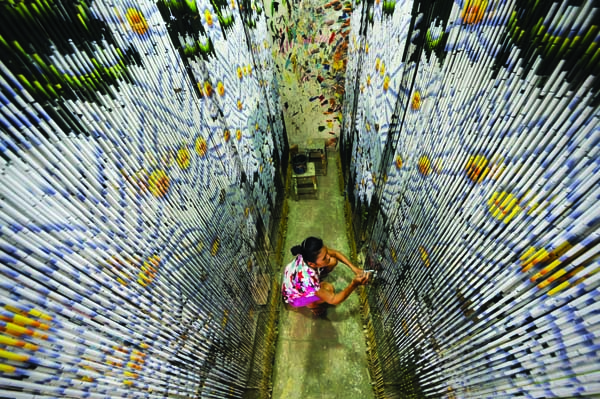 Cool in the shade

Dry bamboo pipes are strung together with a zinc thread. Photo: Ngoc Hai

Decorating with patterns on the screens. Photo: Vo Quoc Thanh

Painting on screen with a sponge.
Photo: Ngoc Hai

Born and raised in Hue, I always felt I was living in a world of bamboo shades. Perhaps because the notion of feng-shui played a very important role in the lives of the people in Hue. Bamboo shades are hung in all old houses here. The shades shield from winds and blazing sun rays, and also have decorative value.
These shades are made of whittled cylindrical l? ô bamboo splints, the size of ordinary chopsticks, tied together with flax cords and coated with golden hairy leafed apitong oil to avoid getting mouldy.
I remember in the 1970’s, people of the suburbs around Hue spent all their spare time weaving bamboo shades to protect their houses. The shades in the countryside are made of ordinary bamboo, with shorter sections, but more durable. They used cheap asphalt, or if they could afford it, translucent apitong oil to coat the shades. But these modest shades were no less effective in shielding from the cold drizzling winter weather.
Nowadays the shades are used not only to shade but also to decorate. In a modern house, the coarseness of the bamboo suddenly creates the feeling of nature and intimacy. The faded color of the shade may be perfect behind a dark shining sofa. A half-sized screen in the middle of a room with high ceilings makes it feel so much cozier.
Coming later to the North, I discovered that the shade shop street of Hue, which is a section of Hang Be Street, is nothing compared to the Shade Shop Street of the old Thang Long. Among the 36 shop streets of Hanoi, one specialized in bamboo shades. The shades come from a place with a mythical name of Rung Manh (Shade Forest), which is actually a folkloric name of the village Gioi Te inside the country of folk songs in Bac Ninh Province. By hearsay, this place used to be a bamboo forest. As people came to settle here, it became known as the ‘fish bowl’ of the low lands. Every 7th lunar month when water overflows boundaries, and the whole region becomes a white sea of flood water, people weave bamboo baskets and creels and flock out to the fields to catch fish and prawns. Later they learned to make thicker screens to fence off the flies and mosquitoes. That’s how the shades came to being. Today, the Shade Forest has many lines of products which are sold everywhere.
In the South, there are also many fabulous bamboo shade trade villages. Tan Thong Hoi Commune, Cu Chi District, Ho Chi Minh City, is known as the country’s leading producer of bamboo shades. Recently the name became known internationally when Tan Thong Hoi bamboo shades gloriously went abroad, joining big markets in Japan, France, Denmark and America.
Here, the material comes mostly from Tay Ninh Province. Equal-sized golden bamboo twigs, the skin scraped off, are cut into 6cm long chunks, and soaked in soapberry water to become termite and wood-borer proof, and then sundried for a few days. The decorative elements are painted, not with a brush, but a piece of sponge.