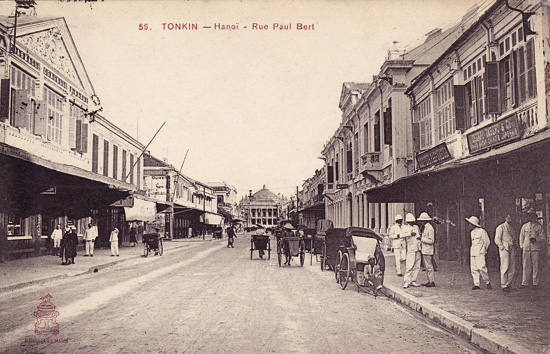 The Hanoi Opera House, at the end of the Paul Bert Street and a closer view. These pictures, and the one opposite, are from the collection of Philippe Chaplain. The second and third date from the 1900’s, were printed by Pierre Dieulefils, who had premises in Paul Bert Street, and were used for postcards

Vietnam Heritage, October-November 2011 — The Opera House in Hanoi was one of the physical manifestations of the French dream to make Indochina a colonial federation of states, with Hanoi as the capital, according to Professor Philippe Papin, in his History of Hanoi, published in 2010. France needed modern, magnificent and significant structures to display its presence in the region and impress the local people, according to Papin, and this led to edifices way out of proportion to the size and makeup of Hanoi’s then population.
The Opera House was at the end of rue Paul Bert, the Avenue des Champs Elysees of Hanoi, which is now Trang Tien Street. It is more grandiose and bulkier than many of the opera houses in the cities of France, with at least 870 seats and granite steps, even in the basement. Designed along the lines of the Opera Garnier in Paris, Hanoi Opera House was completed in 1911, after more than a decade and many interruptions due to such things as unlawful bidding and financial scandals involving city officials. The French built smaller opera houses in Hai Phong and Ho Chi Minh City.
According to Nguyen Cong Hoan’s Jumbled Thoughts Jotted Down, published in 2004 in Hanoi, French theatrical productions were staged, the theatre season being in autumn. The two balconies were for the Resident Superior of Tonkin and the Mayor of Hanoi, and compartments beneath for the press.
Hoan went to the Opera House for the first time in 1917, to receive a pile of beautiful books for being an excellent student. Top students from French-run schools and Dong Khanh and Buoi High Schools received prizes.
Not until 1919 did Vietnamese people, and only those who had studied in France, start performing at the house. Le Malade Imaginaire, by Moliere, was presented. In 1920, students of the Education College presented Moliere’s Le Bourgeois Gentilhomme.
Vietnamese traditional Cheo singing had been absent from Hanoi for a long time, when, in about 1942 or 1943, a charity fund hired a troupe called Thinh to perform. Elderly gentlemen in the front row kept their eyes shut and their heads down when they heard the first drums retrieve the past.
On the afternoon of 17 August, 1945, Hanoi Opera House witnessed the unfolding of the national flag with a red background and a five-pointed yellow star in the centre, to the sound of the national anthem March to the Front.
The Opera House became the meeting hall for the new Government’s officials and served revolutionary artists and performances. The National Assembly held its first meeting there on 6 January, 1946. Though no bloody fighting took place in this Opera House, as it did in Hai Phong’s, the Hanoi House came under French canon fire one night and the holes can still be seen.
For many years there was a city siren on top of the building and the siren became an air-raid alarm in the American War.
The Vietnam National Symphony Orchestra performed international and Vietnamese operas in the Hanoi Opera House during the war and the headquarters of the Youth Theatre was there. Many Vietnamese singers and musicians started their careers at the Opera House.
Due to limited cultural knowledge, according to Hoan, during [what is called] the ‘subsidy’ period [1975 to 1986], the bas-relief nymphs and saints on the ceiling were destroyed, never to be restored. By the end of the 20th century, Hanoi Opera House had been renovated.
I walked on to the stage of Hanoi Opera House for the first time in 1969, after the Americans had stopped bombing Hanoi, when I was part of a post-and-telecommunication-sector performance.
Since 1975, when the American war ended, Hanoi Opera House has witnessed the rebirth of Vietnam National Symphony Orchestra [now ‘and Opera’ has been added], the return of the renowned Vietnamese pianist Dang Thai Son after he won the world Chopin championship in 1980, international  concerts organized by Toyota and Hennessy, pop, rock and jazz by Vietnamese and international artists, the musical revivals of Van Cao, Doan Chuan and Trinh Cong Son, the golden voice of  Ngoc Tan and, for Hanoi’s millennium, last year, the top-class orchestras of Dam Linh, Vinh Cat, Do Hong Quan and Tran Manh Hung.
Hanoi Opera House has been with me throughout my art journey, in poetry nights or at the award ceremonies of the Vietnam Musicians’ Association. In the summer of 2009, 40 years after my debut at the house, a song of mine, Dung Quat’s Heart, was sung there.
For the past century, Hanoi Opera House has been a witness to the success and growth of numerous artists of various generations.