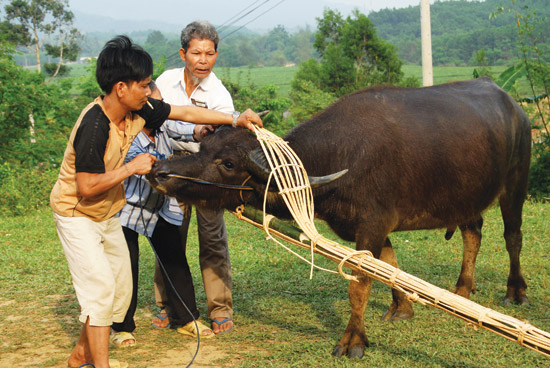 Living in the northwest highlands of Quang Nam and southwest of Thua Thien-Hue, the Co Tu ethnic people still maintain some traditional festivals. Notable among them is the Ch’chrai buffalo sacrifice festival. YKong, the village patriarch, presider over the most recent festival in mid-2012 at Eo village, (Commune 3, Tay Giang District, Quang Nam Province,) said that ch’chrai is the ritual celebration of completing the sowing of the fields. This usually happens around the end of April or May of the lunar calendar.
Ch’chrai is often held annually by individual families at their homes, simply by preparing meals with chicken and pork to worship the god, wish for a good harvest and health and peace for the family and village. Only when conditions allow can villagers contribute money to organize a village ch’chrai festival with a buffalo sacrifice ritual, usually once every three to four years.
The ch’chrai buffalo sacrifice festival is held at the guol – the village communal house. A pillar is planted in front of the Guol, decorated with painted patterns and tassel cord woven from thinly- sliced bamboo. Two long bamboos with their tops tied together are also planted in front of guol and decorated with long bamboo tassel and leaf. An altar is also built in a corner of the guol grounds. In the late afternoon of the festival day, when the worshiping ceremony is complete, the opening speech commences, accompanied by a horn-call and the howling and screaming of the patriarch. Villagers march around the buffalo, which is bound to the centre pillar, beating drums and gongs and dancing. They dance until midnight under the flickering light from the fire.
The following morning, the worshiping and offering of sacrifice continues as before, and lasts nearly two hours. This is followed by the buffalo sacrifice ritual – the most important part of the festival. A chosen village senior holding a long spear rushes out and tries to stab directly into the heart of the buffalo, which is running around the centre pillar while the villagers shout and chase it. If the senior misses several times, people replace him until the buffalo falls. The dancing, howling and screaming continue, even as the dead buffalo is being slaughtered.
After that, a meal will take place with dishes made from buffalo meat and other offerings. The fun at guol ends at mid-afternoon, but the festival may be extended by individual families throughout the night as every household receives part of the buffalo meat.

Binding the buffalo to the pillar at the guol centre

Women in Ya-ya folk dance, dance all day and night around the buffalo pillar.

Village patriarch, preside of blowing horn ceremony, signals the beginning of the dance around buffalo pillar.

Packaging croissant and bamboo rice to worship and eat during the festival.

Text and photos by Huynh Van My