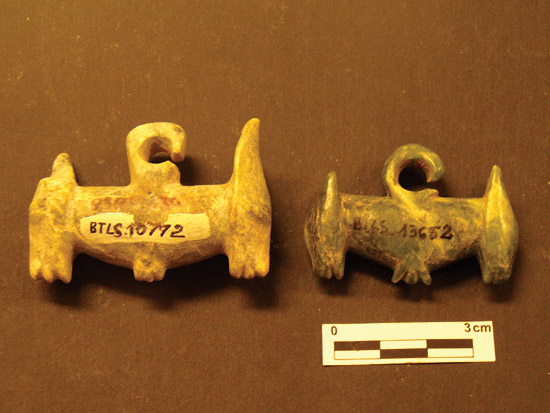 Ancient jewelry looks ahead and behind

Double animal head earrings are considered characteristic of Sa Huynh culture during the Metal Age in the littoral regions of central Vietnam (Sa Huynh culture was discovered in 1909). They are a form of earring with the heads of two horned animals attached to the ends of the earrings’ bodies and long or short hooks for securing them to the ears.

This unique form of artefact has been found mostly in the brackish jungles of Ho Chi Minh City’s Can Gio District. Several surveys and two excavations at two archaeological sites in Giong Ca Vo and Giong Phet in Can Gio uncovered 32 of these earrings along with much jewellery made of glass, jade, and agate. In particular, there was a delicate, flat earring made of Nephrite jade with engravings of animals on one side. Its shape resembles Buddhist stone chimes.
Whereas in the historical sites of Sa Huynh culture and in some other areas, only individual double animal head earrings were found in tomb jars, at the grave site at Giong Ca Va, six tomb jars were discovered with a pair of earrings in each grave. Most notably, in one tomb jar, the quite intact skeletal remains of a skull that had a double animal head earring made of green jade were discovered lying close to the left ear. This is precisely what allowed archaeologists to determine that this artefact functioned as an earring rather than an amulet as was previously thought.
At the Giong Ca Vo historical site, traces of manufacturing double animal head earrings and many other forms of jewellery were found. None of the earrings entirely resembled another, including the ones buried within one grave.
About 70 double animal head earrings were found at 15 archaeological sites in Southeast Asia. Can Gio is the location where the greatest number of earrings was found (32 of the 70 earrings); the second greatest number was found at Dai Lanh (Quang Nam) with about 20 earrings. It is quite possible that the two production centres of double animal head earrings, Dai Lanh and Can Gio, interacted with many other places in the Southeast Asian mainland and island regions.
Nevertheless, even in the cultures of Sa Huynh and Giong Phet, aside from evidence of production sites, researchers still have yet to find a form of artefact that can be considered the precursor of the double animal head earrings. This remains an obstacle in trying to explain the true origins of this form of ancient jewellery.
As far as the earrings are concerned, there is a general agreement among archaeologists that they were sacred objects that symbolized the beliefs of the jewelleries’ owners. Anthropological sources indicate that a common phenomenon in the cultures of many ethnicities in Vietnam and Southeast Asia was the images of the water buffalo head and horns, which are prevalently associated with accompanying bird images in architecture as well as in the symbolism and beliefs regarding death and the dead. The water buffalo symbolized the balance and harmony of yin and yang, robustness, and male courage; it symbolized the affluence of the living while, at the same time, it was a creature that could take the dead back to their ancestors. It is possible that giving the dead double animal head earrings expressed the mourning of the living and their prayers for the dead to quickly be reunited in the world of the ancestors.
*Doctor of Archaeology Nguyen Thi Hau is currently vice head of Ho Chi Minh Institute for Development Studies