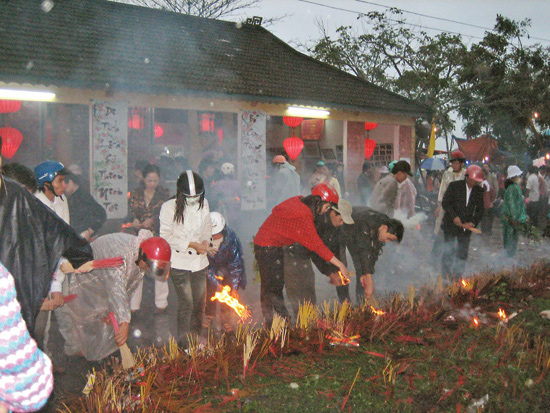 An annual market to wake a tortoise

Incense burns at Dinh market to pay tribute to those who have fallen to protect the land and to pray for good luck
Photos: Van Thien Tung
Vietnam Heritage, February 2011 — Dinh Market, at the communal house of Bich La village, Trieu Phong District, Quang Tri Province, in Central Vietnam, runs from midnight to dawn on the third day of the New Year (it begins 48 hours after the start of the New Year). It is not held at any other time of the year.
According to oral tradition, a golden tortoise used to live in the nearby lake. It appeared on the morning of the third day of the New Year, and the harvest was good. One year it didn’t appear and the harvest failed.
Then every year people sought to make a commotion to wake the tortoise, and so the market came into existence.
Toward afternoon on the second day of the New Year, people in my own village, about 5 kilometres away, are in a hurry getting ready to go to Dinh market. It seems everybody wants to go early in order to receive good luck from the saints.
Tradition is like the spring yeast that enables people to develop their divine feelings deep in their heart.
Four years ago I had an occasion to go to the market. I left home when it was still dark.  The market wasn’t excessively loud.
On both sides of the driveway leading to the communal house, women were sitting under dim light of oil lamps or candles. Vegetables were on sale. I could smell coriander leaves, the attractive stink of the houttuynia leaves and the sour smell of wild plants growing on the edge of a rice field.
I bought a clay whistle and played it. That year I was giving my mother a ride on my bicycle to sell fresh tea leaves, small bunches bound with string made from dry banana bark. The women sold young pepper plants to tinge fields green for the New Year.
The communal house is spiritually alive, with the sweet smell of incense sticks.
People light an incense stick and pray. I followed my mother into the house, made three bows and lighted incense. Since I didn’t know what to wish for, I asked my mother what she wished for and she said she didn’t wish for anything. Are the people in my village strange? Even though they know the village god is spiritually alive, they do not wish for anything for themselves at the beginning of the New Year. They light the incense just to show respect toward their ancestors and deities.
Dinh Market brings villagers closer physically and mentally. In the middle of the night, the light coming from a few lamps is dim enough for people to elbow each other in the crowd.