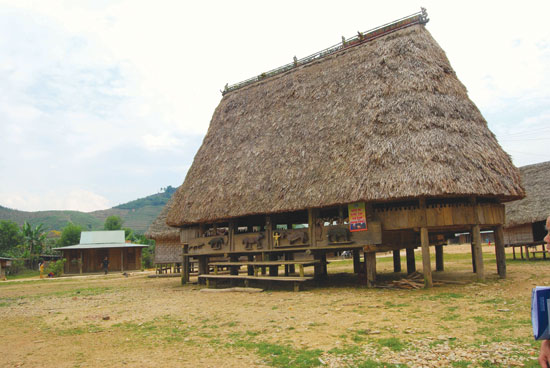 Just like the Kinh people’s family worship house, the Co Tu also had a family house for the whole kin within a village. After
over 50 years not having one because of the wars, the Co Tu of Porning Village, Lang Commune, Tay Giang District, are the first ones in Quang Nam Province to have restored this custom.
70-year-old elder Colau El is making a fire in a big stilt house just 30 metres from a guol (Co Tu village communal house). Colau El says this is dong ca bhu, the family house of his Colau kin. El has his own house, but the whole kin asked him to move here ‘to have a fire burning every day, so that the roofs will be stronger, last longer, thus taking less efforts of the kin to maintain.’
Village deputy chief Colau Chon said, there are 12 kins among 94 households, with 451 mouths of Porning. But there are only nine kin houses, because several of the smallest kins share one.
‘Dong ca bhu looks similar to guol, with the same cradle shape, big stilts and high floor, so many visitors wonder why Porning has so many guols,’ said Mr Co lau Nham, head of the socio-cultural Dept. of Lang Commune.
Elder Arat Hon, who remembers the kin houses from his childhood, thinks that the restored kin houses help the Co Tu restore their good customs and improve unity and harmony in each kin and in the whole village. ‘Many good traditions that I knew only by hearsay are now being practiced under the kin house roofs. Take, for example, the ‘portioning’. Before, your kill is your own food. But since we have kin houses, the kin’s households come here to share it. If the game is too small, it’s cooked right here and each household gets a bowl with some meat and bones in it. Every such gathering to divide the forest’s gift is a lot of joy,’ elder Arat Hon said.
Co Tu kin house is where they discuss the kin’s business. It’s also where the kin’s members, especially young ones, are taught, reminded of the dos and don’ts. Here is where offenders are advised and reprimanded. Conflicts between kin members are also discussed here and will be brought to guol only when the kin cannot resolve it.n

Text and photos by Huynh Van My