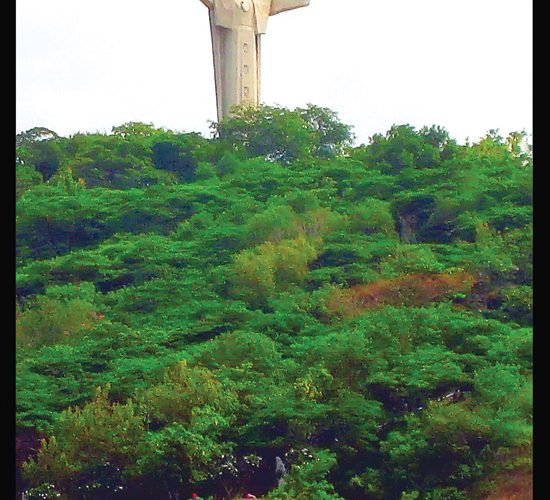 Itâ€™s tiring to climb up the top of Small Mountain (NÃºi Nhá») but once youâ€™re there, you can not only see the largest statue of Jesus Christ in Asia but also the giant cannons and a panoramic view of this city. Thatâ€™s worth the sweat, isnâ€™t it?â€™ the owner of the hotel where I stayed in Vung Tau said when seeing that I was hesitant to hike up to the top of the mountain. Vung Tau city is 125 km northeast of Saigon.
Leaving the centre of Vung Tau city and following Halong Street on the coast line about two kilometres, I reached the foot of Small Mountain. Hiking on the stone steps sandwiched by two lines of frangipani trees booming with white flowers, I saw statues, placed every 100 metres, depicting classic scenes from the Bible of Christianity. The 4-metre-wide path is very steep. Walking about 200 metres more, I encountered a dome filled with many benches inside for visitors to rest.
After 20 minutes of hiking and enjoying the immense blue sky above and the deep blue sea below, I had conquered a kilometre of winding stairs, which put me 170 metres above sea level. The top of Small Mountain is fairly flat with an area of 1.2 ha covered with hundreds of stone benches beneath old trees, which are bare due to the sunlight of the dry season. At the centre of these benches is the lofty statue of Jesus Christ standing in an upright position with arms outstretched above two massive old cannons, which have been recognized as â€˜national historic relicsâ€™ by the government. Adjacent to the statue is a beverage counter.
According to a document issued by Tourist Information and Promotion Centre of Ba Ria – Vung Tau Province on tourist sites surveyed by the provinceâ€™s tourism and culture officials in 2012 [the document was retrieved from www.bariavungtau.com.vn 4, April, 2013], the statue construction began in 1974 and completed in 1994.
In 2011, the chief priest of Vung Tau city, Tran Van Huyen, told the Todayâ€™s Knowledge magazine that â€˜The statue is 25 metres in height and it pedestal is seven metres high.â€™
In 2012, the Asia Book of Records recognized it as the largest statue of Jesus Christ in Asia.
The pedestal of the statue is a rectangular platform whose four walls are carved with four large bas-reliefs illustrating classic references to Jesus Christ.
Inside, the hollow statue has an area of about 50 square metres used to display more than 50 oil paintings describing the activities of Jesus and many photos telling about the statueâ€™s construction.
Following the spiral staircase around the heart of the statue, I climbed up to its shoulders. From there, I poked my head out to have a panoramic view of Vung Tau city.
At the sides of the statue are two cannons in two concrete block houses, which look like two four-ton elephants kneeling with their long trunks trumpeting the sea.

According to the above-mentioned document, there are 15 cannons arranged at different heights on Small Mountain. On nearby Big Mountain, there is an artillery array of six cannons with 240mm calibre, located at an altitude of 100 metres above sea level. They were installed in 1885 by the French.
There is a notice board at the gate at the beginning of the path to the Small Mountainâ€™s top saying that the opening time is from 6:30 a.m. to 5 p.m.
This section, covering Ba Ria-Vung Tau Province, is sponsored by Ba Ria-Vung Tau Department of Culture, Sports and Tourism.