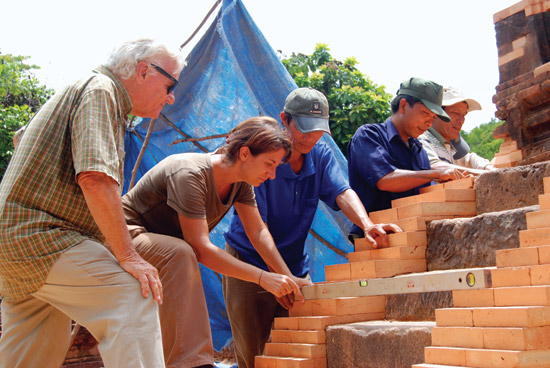 On a typical work day, the head of the My Son temples restoration project technical committee, Professor Mauro Cucarzi, PhD, was on-site to direct the overall restoration endeavour. Professor Patrizia Zolese, head of the archaeological unit, saw to locating the building components and large-scale stone statues that were unearthed through the excavation. The temple walls had collapsed, forming a massive pile. Along with a group of craftsmen, head of the field team and preservation architect Mara Landoni, looked for a way to arrange the long sandstone slabs on the walkway.
‘We already excavated several thousand square metres in the G temple group and part of the E temple group where an enormous mixed mass of bricks and earth was extricated,’ Zolese said as she pointed to the premises, which were neatly arranged after the excavation. Working along with the foreign specialists were several tens of labourers. They were peasants who lived near the My Son heritage site and were selected to work on the project. Through over ten years of on-site work, they’ve since become proficient in archaeological excavation and Cham temple restoration.

Professor Mauro Cucarzi and architect Mara Landoni, first and second from left, and workers at work at temple G1, My Son Sanctuary

‘Each layer of excavation here only allows for a depth of three to five centimetres. As such, we only use trowels and our hands to dig gently and scoop up the earth. We can’t use any other tools. The work looks facile, but it turns out to be arduous in that it forces you to be extremely delicate and careful, and you have to number each and every artefact fragment. Yet, along with the professor [Zolese], we’ve excavated a layer of earth an average of over one meter in depth over a span of two thousand square meters,’ team leader Vo Van Sau, 46, stated with gratification.
Squatting and sitting flat on the ground for time on end, one would think that the work beside the fallen temples was quiet and drab, but who could have guessed that it would soon awaken something in the workers — a fondness, once they realized the significance of their endeavour. ‘Whenever we unearth an artefact, sometimes merely a brick, and listen to the professor [Zolese] explicate its function and significance, we listen with delighted spirits. Also, it is owing simply to this that we lift our hands and work and concede to linger on-site for so long,’ a labourer said.
‘Restoring and repairing the temples or their damaged portions so that they may be transformed back into a form that’s close to their original state in this way is an exceptionally difficult task. Yet, ultimately, the workers and we achieved it,’ architect M. Landoni said as he, along with the labourers, filed smooth the new bricks that were still inconsistent with the old bricks that remained in the temples.
Many workers were ebullient as they recalled old stories about how they first tried their hands at restoration work. Initially, their tools merely consisted of a small chisel, since they did not know which tools they should employ. After some tinkering, they gradually bought a single- bladed and double-edged iron saw, then a handheld cutting machine and a handheld grindstone. Having exerted themselves for several months, they finally got an electric saw and electric filer. However, in order to unearth the damaged bricks at the vestige site, they had to use their hands. Sometimes it took an entire session just to finish chiselling out a few old bricks in order to put in few new ones.
Team leader Nguyen Van Nam, 50, recounted, ‘The specialists brought an adhesive, d?u rái (Dipterocarpus alatus) tree resin, and instructed us to apply it to the filed bricks in order to bind them to adjacent bricks (in place of mortar; this imitated the Cham people’s method of Cham brick construction). We knew that applying cool d?u rái resin like that would not bind the bricks. With our experience, boiling d?u rái to caulk the bamboo junks of the people in our home-villages, we recommended that they boil the d?u rái to be applied to the bricks. That worked. They gave the okay and were mighty delighted.’
‘We came across a lot of statue fragments that were made hollow by the people of the past and then stuffed full of brick shards and brick granules out of convenience. Many statue fragments were built by two teams of craftsmen who made two halves. When the time came for them to be connected, the craftsmen found that the halves were uneven. Thus, they cut one side short so that the edges would match. Discovering those things was truly interesting. We felt closer to the people of old and understood the temples to some degree,’ confided team leader Vo Van Hai, 40.
Team leader Nguyen Van Nam further related, ‘Discovering that the ancient people used brick granules in a number of construction details, we imitated them by pounding bricks to pieces and then crushing them into granules for use. Seeing that it was inconvenient to crush them by hand, the project immediately bought a machine to grind bricks into fine granules. We never suspected that the machine’s fine brick granules would be unusable. Hence, we tucked away the machine and returned to crushing the bricks by hand in order to get a usable mix of large and small granules.’
Though they had cultivated an affinity for restoration work and understood the value of the Cham temples so as to ultimately come to cherish them, many labourers formerly did not comprehend the value of the Cham temples and so dismissed them. ‘Seeing that people would go through the trouble of coming here to see the temples, we often laughed at them derisively, ‘whatever beauty those temples have to see, who can figure!?’ However, once we worked here, we realized how beautiful and how precious the Cham temples are. Therefore, now we are very happy to be restoring our homeland’s temples,’ Mr Hai expressed.