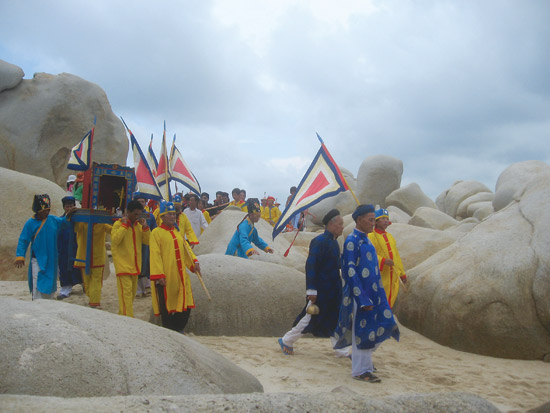 Every year, when the full moon of the fourth month on the lunar calendar rises, villagers of Phuoc The in South-Central Vietnam go to Cau Islet (Cu Lao Cau) for their most important ceremony of the year: Nghinh Ong (Whale Procession) Festival. This year, the event falls on 13 May.
I had a chance to attend the festival two years ago.
I went to Phuoc The, a fishing village about 100 kilometres to the northeast of Phan Thiet City, when the village was bustling with preparations for the festival.
I jumped on a boat to Cau Islet, which is four nautical miles from the village. The wind blew gently and the sea was peaceful. â€˜Itâ€™s ideal to visit Cau Islet from January to July, because the weather is fine and the sea is calm,â€™ said the helmsman.
After about an hour, the old boat docked at the islet, which is 1,500 metres long and a maximum of 700 metres wide. The surface was very flat and covered with wild low weeds, which made me feel like standing on an enormous green barge floating on the blue sea.
â€˜There are no natives here, only one border guardsâ€™ station and two shops selling souvenirs to visitors,â€™ said the boat owner.

The midnight festival
5:00 p.m. The drums commencing the festival were struck consecutively, echoing all around the islet. Thousands of people were packed into an ancient temple. The shaman, named Tran La, told me: â€˜I donâ€™t know when the temple was built, but I guess itâ€™s about 100 years old.â€™

â€˜That there is a festival on this island today that is due to the fact that hundreds of years ago, there was an Ã”ng (whale) that washed ashore on this islet and died. Since the villagers of Phuoc The believed that whales were sacred creatures, they prepared a funeral and burial ceremony and built a temple to worship Ong. Since then, a festival takes place every year,â€™ explained an old man in the organizing committee.
Following the shamanâ€™s offering incense and prayers, a procession with the altar of the whale was shouldered by tens of youthful men toward the sea, accompanied by the incessant hums of the drums and gongs. While the procession stood solemnly on the sandy beach, the shaman stood facing the sea with his hands holding steaming incense sticks, and mouthing mantras to call whales from all over the world to attend the festival.
Right after the shamanâ€™s last words was the sounds of gongs mixed with the sounds of the drums and about 20 young men in the costumes of sailors from olden times, carrying a sword on their shoulders and paddles on their hands lined up in a shape of a boat, sang and danced a traditional ritual. The dance expressed the work of fishermen: kayaking, seining with a net, and saving or picking up the bodies or souls of the people who died in the river or the sea.
After the dancing and singing, the procession was brought back to the temple, right at the time when the full moon rose up on the sea, spraying bright red rays on the water. The people gathered in groups, eating, drinking, singing and dancing on the beach.
2:00 a.m. The drumbeats resurfaced. Under the yellow gleams of a light bulb, the shaman devoutly prayed for Ong to bless the villagers with health, national security, peace, good weather and many marine fish.

And more on Cau Islet
Earlier that day, in the morning and afternoon, I had explored the islet. On the northern shore were two crudely built cafÃ©s. I went into one of them and the owner, an old man named Tu Huu, who had fished throughout the region since he was 10 and had twenty years of keeping the cafÃ© on Cau Islet, told me many interesting ancient stories of the sea.
Ordering lunch from Mr Huu, I ran to the sea to seek corals. I knew from newspapers that the sea around Hon Cau (another name of Cu Lao Cau, Cau Islet) was one of many coral reef areas with some of the densest coverage and highest diversity in Vietnam.
After swimming about 40 metres offshore, I only saw sporadic corals. Mr Huu told me: â€˜If you want to see dense coral reefs, you have to wear a decent diving suit.â€™
At lunch time, I had a good time enjoying braised giáº¥y fish, sour soup with giáº¥y fish and shrimp, braised anchovies (cÃ¡ cÆ¡m kho tá»™) and squid steamed with ginger. All of the seafood was very fresh and cooked simply.

Except for the sandy beach, which is about 700 meters long, the rest of Hon Cau coast was full of rough rocks. The crags on the south were much more interesting, with many giant rocks rising over 30 meters above the sea level. Some had such artistic shapes as to seem skilfully sculptured by hand.
On the cliffs, sea birds constantly flew up and down, landed and stood, cavalierly pluming themselves. In the middle of a cliff, I found a very beautiful small beach, which was as pretty as the place where fairies take baths in the folktales. The curved sandy beach was about 20 meters long and surrounded by two cliffs reaching out to the sea. The water was as clear as crystal.
Some fishermen at Phuoc The rent out their fishing boats to visitors who want to go to Hon Cau Islet. The price depends on the time, one-way or return and the agreement between both sides, which is about VND2,000,000 to VND3,000,000.
At present, a number of companies in Ca Na and Phan Thiet city organize tours to Hon Cau Islet with snorkeling and scuba diving at the price of $100 to $200 / person.
Phuoc The Commune is located at Tuy Phong District, Binh Thuan Province, South-Central Vietnam.