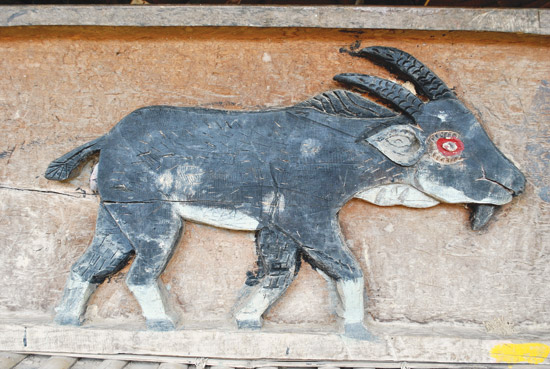 We’ve got your goat

The hour of goat is between 1 and 3 p.m., just after noon, the time of siesta before starting another working session. The month of goat is the sixth lunar month, when the weather is the clearest, just after a harvest. It is also believed that people born in the year of the goat are mostly clever, dynamic, enthusiastic, talented, lucky and successful in business and happy in life. That’s why some people whine in the folklore, ‘Oh its fate that I was born in the year of Monkey/ Instead of carrying a bright omen of a Horse or a Goat’. (Ng??i ta tu?i Ng? tu?i Mùi/ Riêng tôi ng?m ngùi mang l?y tu?i Thân).
In the Vietnamese language, the goat is used diversely to mean interesting hints and metaphors.
‘Goat blood’ (máu dê) is sure to mean high sexuality; ‘goat beard’ (râu dê) is a sign of the goat’s characteristics; ‘goat milk’ (s?a dê) refers to nutrition or a new rich source of income; ‘old goat’ (dê c?) is a pervert; ‘goat’s habits’ (thói dê) refers to those of a womanizer, etc. The word ‘goat’ (de or duong) appears in many names of places; be it a river, a mountain, an island, a railway station or an administrative area: Duong Xa Village (Hanoi), Son Duong District (Tuyen Quang), etc. Goats are consumed mostly as meat and as a medicinal ingredient, so its name is also attached to many food and medicinal trees and herbs, such as goat blood vine, goat hoof grass, goat penis (eggplant), dam duong hoac (Herba Epimedii). . .

The goat’s image becomes even more intimate through games and traditional festivities. ‘Catch the goat while blindfolded’ (B?t m?t b?t dê) is the most popular game. Children play it just about anywhere, at any time. One kid is assigned to be the goat that has to run around bleating like a goat, and another, blindfolded, is supposed to catch the goat. In the festivals, however, adults play it too, and it is even funnier. A man, a woman, both blindfolded, and a goat are led into the play ground. All three wear palm leaf rain coats and tintinnabula around the ankles. The humans are supposed to catch the goat, but most of the time they catch each other, triggering huge bursts of laughter.
Goats are also seen in architecture, decorations and sculpture. Among the six domestic animals (buffaloes, chickens, dogs, pigs, goats and horses) the goat is perhaps the first one to appear in ancient temples where there used to be sacred animals (dragons, phoenixes). For example, all the Buddha’s pedestals at the Boi Khe, Trung, Que Duong temples of Hanoi (dated 14th century) have carvings that depict happy goats with a branch of buds in their mouth, their head turned backward. The stone pedestal of Vap pagoda in Yen Bai has the same goat without the buds. But Thap pagoda in Bac Ninh (dated early 17th century) has over 50 reliefs on the stone railings, among which an upper one on the left delicately depicts three goats: one lying on the grass, the other two in different dynamic positions looking up the sky at the sun partly hidden behind clouds. Goat paintings also appear quite early, most notably are the ‘Six playing in Spring’ of the Hang Trong strain in Hanoi, depicting an old man watching six kids playing with goats, and the ‘Catching the goat while blindfolded’ of the Dong Ho strain in Bac Ninh, depicting a goat running away and looking back at a blindfolded young couple who are trying to catch it.