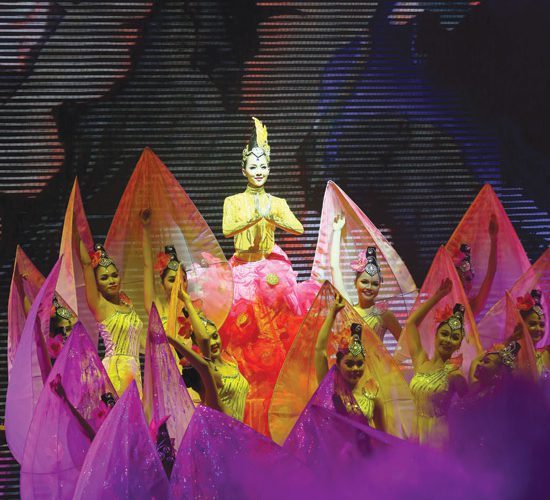 Watching the lotus bloom listening to its music

If you are resident of Ho Chi Minh City or happen to be in town on the fifth of any month, there is a real treat awaiting for you in the evening at the city opera house. Due to a lack of publicity for foreigners (Mine was the only non-Vietnamese face in a fairly packed auditorium!) one might call this one a shrinking violet, were it not for the fact the flower in question is the lotus. This cultural show takes, as its theme, this national emblem and the waters upon which it floats. Do not be deterred by all the commentary being in Vietnamese; there is no programme in any language and the advertising flyer is written in poor English. This is an absolute feast for both the ears and eyes. It features many of the country’s best known artistes and scenes put together by leading choreographer Mr Dang Van Hung. You will enjoy a range of lively dance with both traditional and modern elements and with swirling dancers dressed in dazzlingly colourful costumes. Further colour is provided by stunning lighting effects. You will hear traditional music played on local instruments to a standard of excellence even higher than that you will have heard in five-star hotel lobbies at afternoon tea time and the divas and divos will enchant you with their renditions of Vietnamese folk songs.
Attending a Vietnamese cultural show not tailored for outsiders gave me further insight into this land. This show is televised live by VTV and the police’s own TV unit. In fact, the organisation is run by the police. Around half of the audience were policemen and women in uniform. As I was ushered into the theatre by police at the door and had my ticket inspected by a very young policewoman, I felt more like I was being remanded to custody than coming into a place of entertainment and cultural manna. But you have to ask yourself, where in the world would you find the police taking such an active interest in its country’s culture? In my country, you would not find more than a police brass band.
As for the troupe itself, this assemblage is called Bong Sen (Lotus Flower) Theatre of Traditional Music and Dance. Its director, editor and choreographer is honoured with the letters NSUT in front of his name, indicating eminent artiste, as are three other participants and the young lady who plays the lead dancer in many of the scenes Miss Linh Nga has been dubbed Peacock (should that be Peahen?) of Dancers.
The opening scene is a dance dedicated to the lotus flower itself. The central dancer representing the flower is resplendent in her flowing silver and crimson dress. Amidst ground mist she is surrounded by other less-attractively adorned females representing leaves. The piece develops into lively swirling and swinging movements from the flower and graceful twists and turnings from the leaves-a delightful entree!
This is followed by further kinaesthetic poetry with superb lighting effects in a scene entitled ‘Moon on the Lotus Pond.’ Male dancers in traditional Vietnamese men’s robes and caps appear. They dance very acrobatically around a female singer dressed in yellow who is surely a personification of the moon. Throughout the evening, the audience seemed to be familiar with the tune. The background music, however, was innovative, very modern and electronic, with traditional instrumentation. At the end, two male dancers with graceful Asian hand movements showcased the singer holding up large lotus flowers painted on bamboo.
Two other acts involving song were also very memorable. A monk dressed in yellow robes accompanied by girl dancers carrying lotus flowers sang a very stirring composition. He ended very poignantly by kneeling down to the audience. The other star surprised me when she appeared to hushes of awe from many of my fellow spectators. She was just a kid of perhaps just ten years and dressed not in colourful traditional garb like nearly everyone in this show, but in normal clothes. My teenage daughter explained that this was the winner of ‘The Voice Vietnam for Kids’ TV talent show. She amply showed why she was a winning diva with a rendition of a traditional song.
Another highlight of the evening was the act featuring traditional instruments. The flautist with his alluringly beautiful melody at times reminiscent of bird song was superb, as were two ladies playing the stand-up bamboo xylophone fast and sonorously. First class musicians also demonstrated melodious music on zithers and the ‘dan nhi’ fiddle.

The show appears to lose focus for a while when half an hour is given over to videos showing charity activities for minority children in primary school. Then, there was an interview with two teachers from the film. My Vietnamese was good enough to understand that the lady teacher was of Thai ethnicity and that she was awed to be in a big city for the first time. Then, there was a presentation of flowers to donors and representatives of donor organisations, each carrying placards of the sum donated-perhaps a cultural difference for a Westerner who generally expects charity to show a modest face.
All of this in a foreign language might be a little boring, but do try to stay on as there are further treats toward the end. Notably, a group of very small girl dancers and singers in praise of their Uncle Ho all but steal the show. Then there is a traditional dance that somehow manages to incorporate frenetic hip-hop action. Do try to stay to the end as the finale is very colourful, joyous and beautiful.

If you are the kind of person who, when in a foreign land, disdains cultural shows put on for the tourists and seeks out authentic culture, then you really should not miss this one. It is a whole potpourri of dance, song and music, much of it unique to Vietnam and fresher and more vibrant than what your hotel may provide. With tip-top performers and a lavish production, this is two hours of sheer value for money entertainment and insight into the Vietnamese performing arts.

‘Sen’ cultural show is performed at 18 30h every fifth evening of the month at The Municipal Opera House at 7 Cong Truong Lam Son, Ho Chi Minh City.
Tickets at the Opera House, the Rex Hotel and at branches of ‘Gao’ restaurant.
Price: VND600,000 and VND400,000