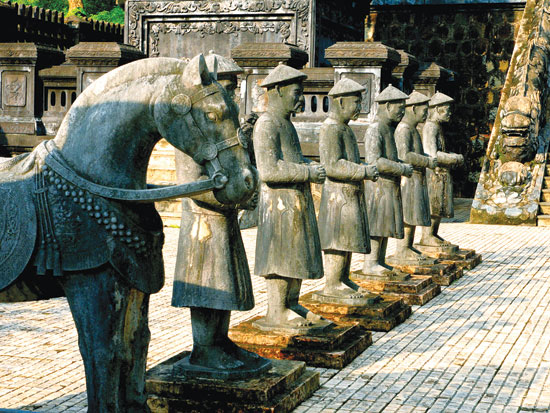 Wake up the lazy angel

The Huge potential tourism in Hue has yet to be utilized. Locals are expecting a breakthrough to lift up the localityâ€™s key economic sector from lackluster development.
Earlier this month, Hue authorities decided to form a single department specializing in tourism, in contrast to other provinces in the country, where administration of culture, sports and tourism remains in one department. This is said to facilitate the development of tourism in Hue, which has huge potential, but has been less developed in decades compared with other areas.
No locality in the country has as much potential as Hue does. It has scenic landscapes and our programmes for beach trips, adventurous and exploring would all find ideal conditions in Hue.
Lang Co Bay, which is 60km to the southeast of the city centre, is listed among the worldâ€™s most beautiful bays. The bay offers various pristine beaches and peninsulas that are perfect for beach activities, seafood and long vacations in resorts. Visitors can take convenient trips to Thuan An beach, where cool breezes are always available during hot summer days.
Hue is also home to the Southeast Asiaâ€™s biggest lagoon system, Tam Giang – Cau Hai, which attracts visitors for its gorgeous sunrises and sunsets fresh lagoon air and delicious seafood.
The locality also boasts the untouched Bach Ma Mountain, 1444m above sea level and offers diversified flora and fauna. For tourists in need of medical rehabilitation, two mineral hot springs, My An and Thanh Tan, provide soothing relief.
Hue was the royal capital of the Vietnamese kingdom ruled by the Nguyen Dynasty from 1802 to 1945. It was thus the place that gathered the best from other regions of the country, from handicrafts to traditional foods. This brings Hue more options for culture and craft village tourism, with destinations including the ancient villages of Kim Long and Phuoc Tich, and traditional craft villages like bamboo-weaving Bao La, paper flower-making Thanh Tien, conical hat-making Chuon, paper portrait- printing Sinh, and bronze-casting Phuong Duc.
All of these features make Hue a place to enjoy old values and local rituals and customs, Home to nearly 300 pagodas and a great number of temples and ritual platforms, Hue is also a pilgrimage destination for religious tourism.
Hue has two Champa temples located in two rural sites, Lieu Coc and Phu Dien. According to the late researcher Ho Tan Phan, Hue has a layer of culture more profound than that of the prominent heritage left by the Nguyen dynasty. Many pre-history artifacts have been found around Hue.
Twenty-three years ago, UNESCO awarded Hueâ€™s heritage system the title of world cultural heritage. The system includes the imperial citadel, kingâ€™s monasteries, ancient bridges, canal and buildings, and royal temples. These serve as the main base for Hue heritage tourism.
In the heart of the city, Hue has iconic colonial buildings that are as nice as those found in HCM City and the countryâ€™s villa town of Da Lat. Far away from the city centre, many ethnic minorities on the mountains have a similar look to northern peoples.

Last but not least, the locality holds the countryâ€™s finest cuisine, with numerous food styles, from royal to grassroots. It also has its different types of music listed as UNESCO and national intangible cultural heritage items.
Hue lacks only the cavern system that neighboring Quang Binh Province has to become perfect in terms of potential. But tourism in Hue has developed poorly. It is said to be a boring destination due to its poor products.
Researcher Tran Duc Anh Son said once in a conference about promoting Hue tourism that the typical locality like Hue needed tourism personnel that had sound knowledge of Hue beside their management skills.
To some extent, Hue lacks a strategic vision for tourism development. Local authorities give almost no respect to cultural experts in exposing Hue culture. Researcher Son suggested that the locality should set up criteria to train qualified tourism staff.
Moreover, Hue needs to improve itself with standard accommodation facilities for research and entertainment activities.
Another researcher, Nguyen Huu Thong, once said that Hue could live well with what it owns and doesnâ€™t need any more added values to its profound culture layers. The key is how to make use of the potential.
Other researchers have encouraged local authorities to make more attempts in improving cultural institutions at the locality by developing art performance stages, cultural activity centres, cinemas and museums.
Travel agencies running tour programmes in Hue have demanded an enhancement of hospitality from locals and coherent management of tourism authorities.
A variety of people from researchers to locals to people living in other localities but with a deep love for Hue, know that strong efforts are needed to make Hue a friendly destination, where visitors are eager to come, stay, feel, smell, and spend.