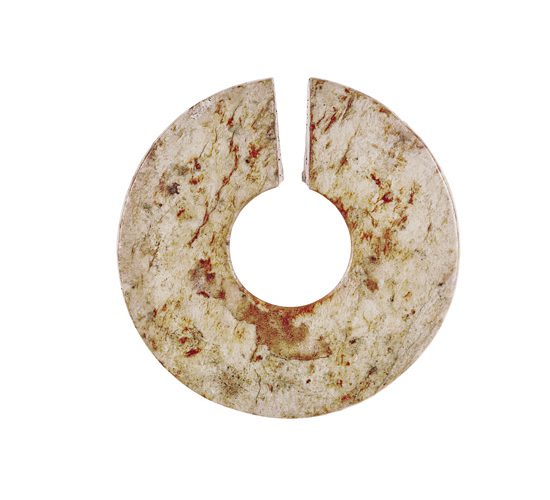 Vietnamese prehistory in the colours of jade

Clockwise from top left: Earrings with animal heads on either side dated 2,500 to 2,000 BP from the early iron age, found at the Giong Ca Vo site, Can Gio District, Ho Chi Minh City

Vietnam Heritage, September-October 2011 — The jade collection in the National Museum of Vietnamese History is big not just in volume, in the diversity of applications of jade in prehistory and history and the colours of jade employed but in what must today be counted as fine art, representing the ‘pinnacle’, to use a term given by the museum itself in reference to objects from the second millennium.
Besides objects produced in the geographical area that is now Vietnam, there are objects of cultural exchange with many countries. Because the objects in the collection are often domestic or for the office, albeit a well-off one, and because many of the objects have dates inscribed on them, they prove that certain ways of life existed when they did.
The museum’s catalogue is worth Vietnam Heritage’s covering it in perhaps three parts – prehistoric, historic and artistic cum art-historical. The following information is from the English-language version of the introduction to and the more prehistorical part of the catalogue or book, Vietnamese Ancient Jade, in which the photography is striking.
The catalogue’s introduction says that in Vietnamese pre-prohistory, jade objects included tools, weapons and a great deal of jewellery, including bracelets, earrings and beads. These come from Bac Son sites, pre-Dong Son and Dong Son, in northern Vietnam, and the sites of the Sa Huynh and Oc Eo cultures in central and southern Vietnam. A lot of jade workshops have been discovered. Archaeological excavations include those at Bai Tu (Bac Ninh Province), Dau Ram (Quang Ninh Province) and Trang Kenh (Hai Phong Province).
Jade objects of the 10th century A.D. include jewellery, ink slabs and seals reflecting cultural relationships and customs.
Jade objects of the Ly, Tran, and Le dynasties [early 11th century to late 18th century] ‘seem to be absent’, but in the Nguyen dynasty ‘our collections are plentiful’. They include many beautifully shaped and rare objects, especially from Imperial Hue. Some are at ‘the pinnacle’ of jade production [presumably from an artistic point of view]. They also bear historical value. These objects include seals of kings and ink ‘slabs’ against which to grind Chinese inks and ingots of ochre.
Some of these are carved with the poetry in Chinese characters of King Thieu Tri. Some are ‘identity cards’. The ‘slabs’ are in the style of Nguyen-dynasty art more widely. Jade ewers, cups and trays for serving Vietnamese tea have inscriptions and some are dated to King Thieu Tri and have decorations like those on Sino-Vietnamese Nguyen porcelains.
The collection’s objects date ‘to the early 20th century’.
The introduction says, ‘The National Museum of Vietnamese History [has] [decided] to [create] a special exhibition and publish a book on Vietnamese ancient jade. They will [do justice to] the tradition of jade production of Vietnam. [The exhibition ran for several months  till January, 2012]
The prehistorical coverage by the catalogue begins with jade objects’ appearing at archaeological sites of the later Neolithic culture on the northeastern coast of Vietnam, which have been called the Ha Long culture. In the northern mountains, jade objects have been found in the Ha Giang and Mai Pha cultures. Vietnamese archaeologists have discovered yellow, white and grey nephrite [jade is the stone of nephrite or jadeite] bracelets, beads, axes and adzes.
In the Phung Nguyen culture, 4000-3500 B.P., jade objects are widespread, with many types, including jewellery, instruments, weapons and statues. Stone artefacts of this culture include axes, adzes, chisels and drill bits. Jewellery, bracelets, earrings and beads were manufactured with perfected technique.

The small stone statue of a man found at Van Dien

In the Phung Nguyen culture, spearheads or daggers, ‘yazhang’, points and arrows produced in jade workshops in the Northern delta have been found at Bai Tu (Bac Ninh Province), Trang Kenh (Hai Phong Province) and Dau Ram (Quang Ninh). Many archaeologists think the Phung Nguyen culture can be named a ‘jade culture’, because the Phung Nguyen people popularised and perfected jade objects.
A stone statue of a man found at Van Dien is the oldest statue in Vietnam. ‘This is a tiny statue, but very precious to the study of ancient jade in Vietnam.’
A stone spearhead/dagger comes from Lung Hoa, grey stone axes, adzes, bracelets from a Phung Nguyen site and stone earrings with bamboo-joint shapes from Dong Dau.
With the Dong Son culture, many new types of jade objects appear, produced by workshops at the confluence of the Ma and Chu Rivers, at Con Cau, Bai Te and Go Ma Chua, for example. Production was professional, artisans making only one type of jewellery, earrings. These were flat and round with large faces and bevelled edges. They were dark-blue, ivory-blue and ivory-yellow.

Objects from Sa Huynh, in central Vietnam, and Oc Eo, in the south, included bracelets, beads, and specially earrings with two animal heads and three points. Beads, round, cylindrical and lozenge, of dark-brown striated jade, come from Sa Huynh. ‘(European scholars think that agate is not jade, but we believe it is jade for the purposes of the Oriental tradition.)’
In the early iron age, 2.500-2.000 B.P., at the Giong Ca Vo site, Can Gio District, Ho Chi Minh City, Vietnamese archaeologists have found grey-blue jade bracelets, earrings with two animal heads in crystal, earrings with two animal heads from white-grey and blue-grey jade and three-point earrings from ivory-white jade.
The museum says, ‘Besides the collection of the Museum Louis Finot from before 1954, most of our collection is from Hue. These are precious possessions of the Nguyen Dynasty that the Vietnamese Government received in the August Revolution 1945.’
Jade objects dated to the Vietnamese dynasties form the largest part of the collection and will be dealt with in the next edition of Vietnam Heritage.