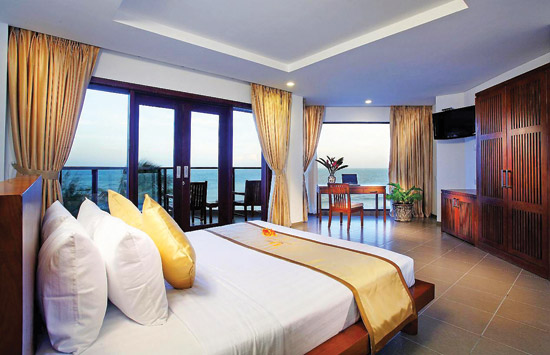 In recent months Mui Ne, that beach village two hundred kilometres east of Ho Chi Minh City that in the space of a mere ten years has achieved fame of the same kind as tropical beach destinations like Kuta in Bali or Phukhet in Thailand, has seen a new kid on the block. Actually it is the block as it is the only accommodation that is a tower block among a long line of mainly bungalow accommodations. Hence its name Unique Mui Ne Resort. Hopefully it will retain that status and not become only the first of its kind. It is still on its soft opening so for now it offers bargain rates . . .
On my way there on the bus I overheard two British couples discuss how they had chosen their hotels and they both said they had been influenced by the website Trip Advisor. I checked the site and found out that Unique Mui Ne Resort had glowing reviews from the public and was straight in at number seven out of 16 Mui Ne establishments. I enquired when the grand opening would take place to be met with the same answer as Obama gives about Afghanistan troop withdrawal, i.e. â€˜When we are readyâ€™. Allow me to proceed to detail to you what makes this place already special if not unique.
Unique Mui Ne Resort is set back from the noise of the main road at the end of a long flower-lined driveway. I was met at reception by Miss Florence Do Huu, the manageress. Her English was so good that I took her for American but in fact she had only gone to school there, having spent most of her young life in Paris. She admitted there was a long way to go with staff training before she could call for the grand opening. However, she said it was amazing the difference even a couple of weeks of training made with the eager-to-learn Vietnamese staff. One area which will take time is the upgrading of English-language skills. At present I found myself resorting to my poor Vietnamese with even the reception staff. The rapidity at which Mui Ne has developed makes training especially important as it is now difficult to find staff with all the requisite skills already in place. Nevertheless, most guests find little reason to complain and occupancy was 100 per cent and even though I had arrived at noon I needed to wait forty minutes before a room became available.

An environmentally friendly feature of the hotel which Florence was quick to point out is that the place is designed like a Gulf Arab wind tower to capture all the sea breezes to a natural air-conditioning effect. Iâ€™ll swear my Deluxe Sea View Room (rack rate $140 (VND2,940,000) benefited from this, though air-conditioning was provided, with in-room controls. Aside from wind there are solar panels on the roof. Also, environmentally, staff are regularly involved in beach clean-ups.
During the time waiting for the room to be ready Florence took me on a tour of the hotel. The wine cellar had been prepared and awaited being fully stocked. Downstairs there is a spa with massage rooms, steam bath and sauna. Something I found fairly unique if we may apply the qualifier â€˜fairlyâ€™ to the word â€˜uniqueâ€™ is that above the entrance there is an overhead aquarium with coi carp (cÃ¡ chÃ©p) swimming above you. This is particularly beautiful at night when mobile blue footlights shine on to it. Out through the basement doors and there is the lounge cum dining room and the infinity pool with the beach butressed against it. There is also the oceanfront Sea View restaurant which offers a la carte international cuisine and breakfast, lunch and dinner buffets. The hotel has access to the beach that is immediate and has a good number of rooms that face the beach albeit that some at ground level have views of a neighbouring placeâ€™s gardens.
My Deluxe Ocean View Room was a real and spacious gem. Unique in my experience was the bathroom which not only had the standard spray shower but also an overhead one that made you feel as if it were raining. I was on the third floor with great views including the long line of manicured beach until it loses itself in the corner of Phan Thiet Bay that is the Mui Ne peninsular with the little blob of Hon Rom island after the â€˜noseâ€™. To the side were the gardens of neighbouring resorts. Practically to the height of my room in their leapings, people were kite-surfing on the sea. Had the breeze been stronger they could have been above me and I imagined Englandâ€™s greatest fictional spy since James Bond strapped to one these dropping on to the balcony, bursting into the room and erroneously arresting me in his inimitable bungling way.
A week or two before my stay Unique Mui Ne Resort had played an active and important role in the holding of an international kite-surfing competition. Despite little wind on most of the days this event had been deemed a success with participation from many countries. Next year of course promises an event better one.
On to that unique feature for a Mui Ne beachfront property â€“ the roof. It is not ready yet. Wind-breaks will need to be installed, as it is, as you can imagine, quite breezy up here. However there are plans for a restaurant and bar which can also be booked for private parties. Honeymooners please note that there have already been candlelit dinners for two here and there is space to accommodate functions for up to two hundred people.
No better place than this roof to enjoy that daily half-hour display of ever-deepening hues of tangerine and blues that ends in darkness and the turning of the sea into the Indian-ink black called a tropical sunset. Sadly, with a hotel full of people, I was the only one there to witness this majestic free show that nature has for the taking.

The beach that had been packed during the day was now still. There was only a young Russian couple frolicking in the surf and a Vietnamese man crouching with arms outstretched as you see men in the streets at conversation doing. It is unusual to see the gregarious Vietnamese without company. I wondered if he were a poet or a philosopher. Perhaps he was contemplating ending it all by drowning himself. The answer was as unfathomable as the ocean itself. I was of course watching the sun set over the East Sea (more familiarly known as the South China Sea to Westerners) and the sun sets in the west so no great fireball slowly being swallowed by the waters as you get in say Manila Bay. I did look west and saw an ominous sight â€“ the dune skyline that Mui Ne is famous for is beginning to disappear. Already there are low-rise buildings on one section and another area has been bulldozed with earthen works in place for further development. Of course there will be spectacular sunsets to view from peopleâ€™s balconies up there but apart from the environmental damage I hope they know what they are doing. Will nature one day claim back her own in the form of landslides?
Florence has already carried out a staff recruitment coup in securing the services of experienced middle-aged French chef M. Marc Grenouillon. He could well be the one and only foreign chef in Mui Ne to remember it as it was in the beginning. Although he has not been here continuously he has memories of Mui Ne dating back to 1995. I myself first came in 2000 so we had some conversation reminiscing about when there were only two real hotels on the whole stretch of this coast.
I trusted my palate to Marc for dinner in the lounge bar. First up was a cocktail aperitif. I chose a Mojito priced at VND95,000 ($4.52). Though Mexican in origin all the ingredients for this low alcoholic but high calorie content drink are readily available in Vietnam. They are sparkling water, lime, sugar, white rum and mint. I tried one of these last year in a Saigon hostelry of renown but this was better. The contrasting dark and light green hues were more beautiful and with a greater use of mint the taste was more delicious.
Marcâ€™s dishes are original if not unique for Mui Ne Vietnamese-French fusion. â€˜Gá»i BÃ²â€™, that Vietnamese dish that often gets translated as beef salad, was given a new twist but using raw beef carpaccio-style and more citrus flavouring than usual. It came served with prawn crackers. A scrumptious start to the meal at VND95,000 ($4.52). Next came a dish that I first thought was fish but actually was slices of squid resembling scales and arranged in a fish shape. Great presentation and with a mix of vinaigrette and butter sauce it was great-tasting (VND90,000 ($4.28)). For the â€˜piÃ¨ce de rÃ©sistanceâ€™ I went for â€˜CÃ¡ Thu Kho Tá»™â€™ or mackerel baked in a clay pot with plain rice and veggies in garlic at VND95,000 ($4.52). All in all very fine dining at very reasonable prices.
I awoke from very sweet slumbers just before dawn and sat out on the balcony to find out just where that errant sun of the evening before had hidden herself. There she was gradually appearing over the line of the Mui Ne peninsular and beaming a golden roadway over the blue satin sea which ran uncannily right up to the sands in front of the Unique Mui Ne Resort. Absolute magic!
Why do these tides of Northern Europeans strike the Mui Ne shores in February? It could all be summed up in one chilling word, â€˜Murmanskâ€™. That was whence hailed the gentleman with whom I had a brief conversation in the lift using up all my limited Russian vocabulary. What a difference a day had made for him! From the near perma darkness, the icy blasts and whiteouts of the Arctic 69 degrees north to this shining tropical beach. He had chosen well his accommodation. He need only step out of his hotel to be on that beach. He could view it from his wide and airy-cool room and balcony along with the coconut groves. There was fine wining and dining and he could restore his weary body at the spa on site. This is only the soft opening. By the time you get there it should be close to perfection. I have the strong feeling that from the Unique Mui Ne Resort â€˜we ainâ€™t seen nothing yet!â€™n