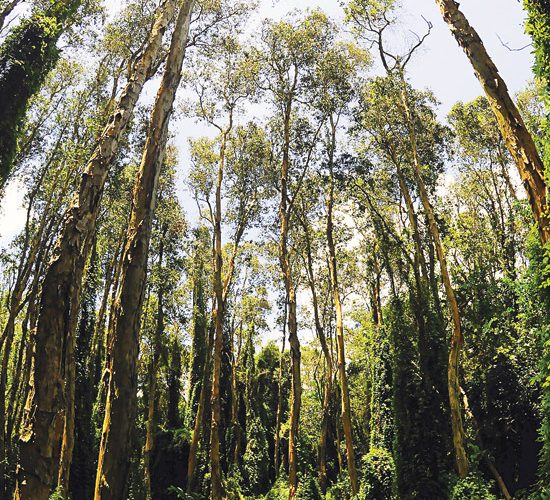 Under fire, under water

Xáº»o QuÃ­t, a flooded forest in the Mekong Delta province of Dong Thap, about 140km west of Ho Chi Minh City, was a revolutionary base in the Vietnam War and heavily bombed. It was recognised by the Vietnamese Government as a national historic site in 1994.
I and a friend bought tickets into Xáº»o QuÃ­t for VND5,000 (US$25 cents).
We were welcomed by three young women in the southern traditional black blouse, called Ã¡o bÃ  ba, checked scarves and wide-brimmed hats â€“ the uniform of women guerrillas.
A cadre named Nhung invited us and other visitors into a boat for a trip around Xáº»o QuÃ­t for 30 minutes at VND10,000 (US$50 cents a person.
â€˜If you want to row the boat yourself, you must rent a boat for VND40,000 ($2) an hour,â€™ she said.
One boat could seat four people.
Ten boats were available at the time.
I asked for a lifebuoy and Nhung said, â€˜The water only reaches your navel. Donâ€™t worry.â€™
Our boat, whose widest part was only 80 cm, rocked slightly for a few seconds before Nhung, rowing standing up, made it surf smoothly on a channel about 1.2 m wide.
Afternoon sunshine came through countless cajuput trees with lots of climbing plants on them, making bright dots on the water.
â€˜This forest is an area of about 50 ha, of which 20 ha is covered with cajuput trees, Nhung said. â€˜In the flooded season, the average depth of water in the whole forest is about a metre.â€™
Nhung said the place was called Xáº»o QuÃ­t (xáº»o means canal and quÃ­t means kumquat) because there used to be a lot of kumquat trees in the area. [It is not known what happened to the kumquat trees., Ed.]
In 1960, the Communist Party branch in Kiáº¿n Phong (currently Äá»“ng ThÃ¡p) Province had chosen Xáº»o QuÃ­t for a secret base.
For camouflage, they had grown cajuput trees [cÃ¢y trÃ m], which had become a forest.
They had tunnel, led and built fortifications, houses, a health centre and a meeting room. The buildings had been abovewater, on reclaimed earth.
The canal wound through the forest. The further we went, the merrier the birdsong.
Big birds were startled and flew away.

Nhung said there were about 170 species of plants and 200 species of animals in the forest. Thirteen of the animals were in the Vietnam Red Data Book. They include an Indian python, oriental rat snake, otter and golden-coin turtle.
Nhung pointed out a replica of the tents the Communist forces used.

We went on and saw a few small buildings made of the forest trees. Nhung said these had been replicated the guerrillas houses, health centre and meeting room.
In front of each structure was an information panel in Vietnamese and English.
Between the houses are tunnels, fortifications, most of which are still in the same shape as they used to be.
Some wide spots along the channel were bomb craters, Nhung said.
A document at Xáº»o QuÃ­t Management read, â€˜Around Xáº»o QuÃ­t base were more than 10 military posts of the allied, US-backed South Vietnam troops, creating a closed circle. The nearest military post was just 1 km from Xáº»o QuÃ­t and the farthest was 6 km away.â€™
Among the documents, it was also recorded that the Communist guerrillas in the area had survived thanks to the support of food, weapons and medical supplies from the ordinary people living in the area.

Nhung said, â€˜During the war, the Communist guerrillas and officials also used boats like this to move from place to place to exchange information and transport food.â€™
She said Xáº»o QuÃ­t Tourist Area received dozens of groups of visitors from other countries, including France, Japan, Russia, China, Taiwan, the United States and the United Kingdom, every day. Many of the visitors were US veterans of the Vietnam War.
Getting there:
From Saigon, visitors can take National Highway 1 A through Long An and Tien Giang Provinces. About 1 km from the famous My Thuan Bridge, turn right into National Road 30 and go to My Long Crossroads at Km13, turn right and go 6 km to Xáº»o QuÃ­t.
Alternatively, go to the Mien Tay Bus Station, in Ho Chi Minh City, and take the Saigon-Cao Lanh bus, get off at My Long Crossroads and take a motorcycle taxi (xe Ã´m) to go to Xáº»o QuÃ­t.
Xáº»o QuÃ­t Tourist Area is open from 8 a.m. till 5 p.m.
The area has a restaurant that serves specialities of Dong Thap, like tortoises, snakes, fish and mice.